Earlier this week, Blinky Productions released the first episodes of their Deadpool webseries. Written and directed by fan-film veteran Chris R. Notarile, the webseries is said to show “Deadpool as he was originally intended to be (not too funny, not too over the top, and still ass-kicking)!“

While initially well-recieved, the fan films were quickly taken down from YouTube by Marvel Entertainment “due to a copyright claim.” In addition to the Deadpool films, several of Blinky’s other fan-films featuring Marvel characters Daredevil and Punisher were also removed.

It seems like an odd move for Marvel, as Deadpool isn’t one of their best known characters and would benefit from some good, free publicity, especially with a new Deadpool video game on the way later this year. Besides, Blinky’s films were all non-profit and so legally were not in breach of Marvel’s copyright. For good or ill, it is beginning to look like Deadpool may set a precedent that could affect all fan-films on YouTube.

The creators of the series seem to be remaining positive, asking their fans for help via their Facebook page, with star Damian Vargas asking fans not to “speak ill of nor tarnish Marvel”. Meanwhile, Vargas’ wife and Nerd Herders co-host Veronica Vargas is trying to fight for fan-filmmakers, posting:

I’m on a mission for all non-profit fan films to not get the axe from youtube, using the Deadpool Webseries as the big example. Marvel had that web-series, as well as all the other Marvel fan films from Blinky Productions Inc, removed from youtube. 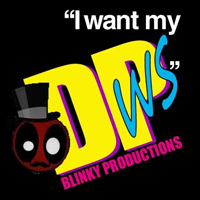 Deadpool & the other fan films are all non-profit and not monetized on youtube, so legally they cannot take them down. But we want to show Marvel the amazing love & support we were getting about the Deadpool Webseries prior to it being removed and all the support we’re getting now.

Hopefully, Blinky and Marvel will be able to settle the matter quickly and amicably. It would be a shame if this meant an end to fan-films on YouTube.

If you would like to show your support for Blinky Productions and Deadpool webseries, you can sign the fan-lead online petition here.