Tall green hats, green beards; green, white and gold face paint and all the booze you can handle and then a few pints of Guinness to top it off. It’s either just a normal Saturday night in Manchester or it’s St. Patrick’s Day!

The Irish religious festival unleashes a fury of green upon the western world every March 17th and the hero world shows its support to the cause with an enviable ensemble cast of green characters. In honour of the Saint of the Emerald Isle, here are our Top 5 green heroes: 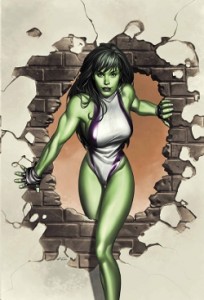 Bruce Banner’s cousin Jennifer Walters is the ultimate mutation hero: A successful lawyer by day and a lean, mean, green crime-fighting heroine by night. Her ability and mutation is far more advanced than that of her creator Banner. After a devastating accident Walters needed a blood transfusion, so up-stepped Banner to donate his infected DNA to his cousin. It’s the thought that counts! What separates Walters from Banner is that when she turns green we do like her when she’s angry.

She has several advantages over the Hulk: she isn’t restricted by size as she doesn’t grow into a huge beast, she keeps her personality after transforming and in most cases is actually more liked by people as She-Hulk. As her alter ego, Walters, she is a dominating career woman with a blurred moral compass but as She-Hulk she finds worthy causes to fight for and becomes a woman of the people. She has most of the Hulk’s strengths and perhaps none of his weaknesses as she can intelligently communicate with the world as well as being super strong, agile, and fast and have regenerative healing abilities. She-Hulk is like The Mask if The Mask was a woman and wanted to use the powers for good. Oh yeah and she’s Smokin! 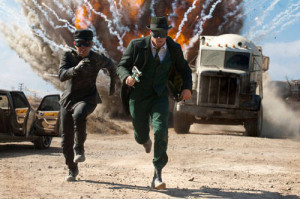 The Green Hornet has all the hallmarks of a hero: Orphaned by a super villain, check. Billionaire playboy living irresponsibly, check. Trusty sidekick, check. Newfound quest for good and all things heroic, check. The Green Hornet started life as a radio show in 1936 but is probably best known for the 1960s TV show starring Bruce Lee as sidekick Kato. More recently it was revamped for the big screen with Seth Rogan as the Green Hornet AKA Britt Reid.

Despite the movie being a flop and the harsh reviews it received form critics, I really liked Rogan’s version of the hero and to me that is the Green Hornet. A laid back playboy, Britt Reid is a spoilt brat coasting through life on his father’s coat tails until his Father gets murdered by local gangsters. His crime fighting is inspired, not only by his loss, but by his Valet Kato. A trusted employee of his family for years, Kato has many strings to his bow. Not only is he a martial arts expert but he is also a gadget wiz and inventor. Creating some impressive weaponry, Kato and the Green Hornet don Lone Ranger style masks and become the ultimate crime-fighting duo.
3. Green Arrow

Oliver Queen, millionaire businessman and owner of Queen Industries is the Green Arrow. This may be extreme bias but, as I was a late-comer to the Green Arrow, I’ve never really bought into him as a bonafide big time superhero. I find everything about him to be weak. His costume is gay, I mean a green hood might have worked for Robin Hood but compare him to Batman and it just looks silly. The billionaire playboy, although a staple of a hero, just feels played out with Oliver Queen. Admittedly about 95% of my exposure to the Green Arrow is through the CW series Arrow. I got about three episodes in to the latest “hero” drama to make it to TV and that was more than enough. It is pure cheese and is perhaps the reason I have never warmed to the character. The composition of the story is all over the place: between the flashbacks of his “old self” being a total dick and the current narrative of a swarve, new cropped hair, transformed heroic character; the audience is left bewildered. The cast is awful, especially his bodyguard, who couldn’t be more bland if he tried.

In the comics, however, Green Arrow is quite different. Leaving behind the still-cheesy trick arrows, in Frank Miller’s The Dark Knight Returns, Queen eventually becomes a Communist outlaw, fighting for the rights of the people. I guess that’s one way to be red and green…

With this ring I make thee green. The Green Lantern concept allows the wearer of the power ring access to a host of powers including the control over the physical world, making the ring one of the most powerful weapons in the universe. The film had a convoluted story, but it made for an excellent animated TV series. The movie, as with the Green Hornet, was panned by critics and flopped big time. But yet again I really liked it. I thought Ryan Reynolds fit the hero mold to a tee and his Hal Jordan would be welcomed back by me in a Green Lantern sequel, although that reality looks doubtful.

He is undeniably the greenest hero of all time, he is simply the Hulk. The Incredible Hulk does not mess about when it comes to letting people know how he feels. He comes in one gear- ANGRY! One of Marvel’s most loved creations the Hulk first began in 1962 in the comic The Incredible Hulk #1. Since then he has made several trips to the screen, most notably in last year’s awesome spectacle The Avengers Assemble. The CGI monster, expressed by Mark Ruffalo, stole the show with his no-nonsense approach to villain bashing. Ruffalo is the third man to bring the green giant to the big screen with not so successful attempts previously from Eric Bana and Edward Norton. However, despite the lack of commercial success, for me, Bana’s Bruce Banner is still the strongest performance to date.

The Hulk may not have made it to the list at all if it wasn’t for a last minute change by creator Stan Lee. The Hulk was originally gray but due to complications with the consistency of the shading Lee decided it would be easier to make him green. So the Hulk we know today was born. Although there will be no solo Hulk outing as part of Marvel’s Phase Two, he will be back for the Avengers sequel and it’s rumoured Marvel have big plans for Hulk in Phase Three. Planet Hulk possibly?

Who is your favourite green hero of all time?