Okay, so David and I have just got back from a midnight screening of Iron Man 3. We are both very tired and, since David actually has work today, I’ve agreed to write the review. I, however, am also very tired, and, since we want to get this up ASAP, we ask that you pardon any grammatical errors, spelling mistakes, etc. I’m usually pretty good at spotting them and the spellchecker should grab the rest, but in the event something slips through the cranberry…

There may also be a few in-jokes, but spoilers will be kept to the second page. Which is to say there will be spoilers. So, if you don’t want to read them, you probably shouldn’t click on the next page. 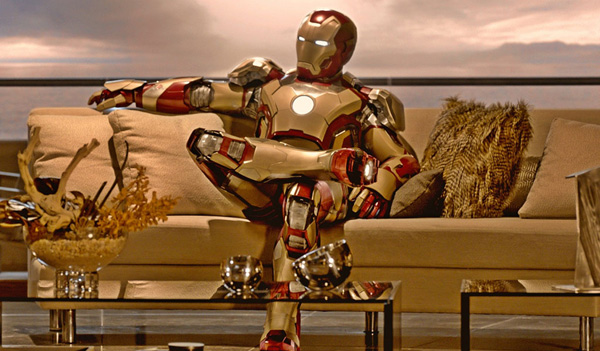 Iron Man 3 not only marks the start of Phase 2 of the Marvel Cinematic Universe, but also the end of an era. Robert Downey Jr. has been playing Tony Stark for five years now, starring in four films and cameoing in another (The Incredible Hulk) and recently announced his intention to leave the role sometime in the non-too-distant future. As fun as it must be adopting the persona of a billionaire genius playboy philanthropist, it’s easy to understand why he might want a break. As such, Iron Man 3 could well be the last standalone film to feature ole Shellhead (though RDJ’s contractually obliged to appear in The Avengers 2, which is due out in 2015). The question is whether it can be considered a worthy conclusion to the trilogy of a superhero arguably only second in standing to The Dark Knight himself.

Shane Black, best known for scripting the first two Lethal Weapons and who previously worked with RDJ on comi-noir Kiss Kiss Bang Bang (which marked Black’s directorial debut), acts as writer-director, a risky strategy one would think given his relative lack of experience. Black, however, seems to have an instinctive understanding of Tony’s personality, which, given the similar role he played in Kiss Kiss, one would imagine bares some similarities to Downey himself. The opening sequence, set in Bern, Switzerland at the turn of the millenium, thirteen years ago, showcases the man he was prior to the accident that put an arc reactor in his chest and led him to create the Iron Man armor. He’s brash, cocky, charming, clearly viewing the brilliant Dr. Maya Hansen (Rebecca Hall) as just another conquest while cruelly leading on geeky boffin Aldrich Killian (Guy Pearce) with promises of a collaboration that will never happen. This is, for the most part, a far different man from the Tony we see upon our return to the present day.

Haunted by his near death experience at the end of The Avengers, not to mention the confirmed existence of gods and aliens and wormholes, Tony is an emotional wreck, barely keeping it together. Christmas is approaching (as with so many of Black’s films) and his relationship with Pepper Potts (Gwyneth Paltrow) is the rockiest it’s been in a while. He can’t sleep, and in order to keep his mind off the events in New York, he spends his days and nights working on his Iron Man armory, building suit after suit in order to protect himself and Pepper from whatever threats may lie ahead. That threat just so happens to take the form of Ben Kingsley‘s Mandarin, a pan-Asian composite terrorist who commits unnamed atrocities and lectures the American people on their hollow, neo-imperalist ways from atop a dragon throne. Far more insidious, however, is the danger represented by the newly reinvented Killian who’s ditched the straggly hair and walking aids and donned a Brioni tux. Killian is a truly self-made man, a dark mirror of Tony himself in ways that the last film’s Justin Hammer could never be.

When a terrorist attack on Mann’s Chinese Theater lands Tony’s best friend and new head of security, Happy Hogan (former Iron Man director Jon Favreau), in intensive care and leaves him battling for his life, Tony rashly declares war on The Mandarin in front of the assembled press. The terrorist’s response is rapid and ferocious. In a sequence strongly featured in the ad campaign, three gunships make a coordinated attack on Tony’s clifftop Malibu penthouse, reducing it to rubble on the ocean bed. Tony, outgunned and outmanned, is left unarmed and miles from home. It’s now that he’s forced to truly confront the question Steve Rogers posed him during The Avengers: “Big man in a suit of armor. Take that away and what are you?” There are no pithy retorts to be made here as Tony has to contend with the might he has brought down upon himself and Pepper both through his actions now and in the past. It’s up to Tony now to break out of his shell (literal and otherwise), rebuild, and take the fight to them.

Shane Black has packed a lot of cool stuff into Iron Man 3 – the aforementioned destruction of his Batcave not least among it -, but also a real emotional journey for the character of Tony Stark, such as failed to take place in Iron Man 2. It’s typical, almost cliche even, that in the second film the hero will be faced with the limits of their power and will ultimately have to decide whether to continue in the role (Star Wars: The Empire Strikes Back, Spider-Man 2, others beyond counting), but it’s Iron Man 3 that really has Tony engage with his understanding of himself, of who he is and what it means to be Iron Man. A sequence in wintry rural Tennessee – again, also featured in promotional material – sees Tony dragging a wrecked suit behind him through the snow: it, and the Iron Man persona, have become a dead weight for him. The events of Iron Man 3 drive Tony out of his cocoon, and, with no appearances by any other the other Avengers, makes him stand on his own two feet, alone, vulnerable.

Well, not completely alone: there’s still Don Cheadle‘s Rhodey to back him up, and Pepper, of course, but Tony spends much of the film by himself, out in the wilderness. A regrettable side-effect of this is that Cheadle and Paltrow don’t get as much screen-time as they could have, though both feature strongly in the film’s climax (poor War Machine doesn’t get much of a look-in, but the rebranded Iron Patriot does get a piece of the action).

The plot, apart from being well structured and fast paced, shows a lot of heart, such as in Tony’s meeting and “connection” with a near abandoned kid. Though this might sound like something straight out of Capra, Black keeps the encounter this side of schmaltzy with a no-nonsense approach, typified by Tony’s response to the kid’s complaint about his absent father: “Dads leave. No need to be such a pussy about it.” RDJ is once again excellent in the role, managing to make you care for a character who in other hands could have simply seemed an arrogant jerk. He may still be brash and cocky, but Tony’s also a genuine hero with or, as Iron Man 3 shows us, without the suit.

Iron Man 3 builds to a climax that fans of Tony and his inventions will truly thrill at. To give away as little as possible, it involves a number of colossal shipping cranes, many combatants, and it all starts with the code phrase “House Party Protocol”. Most importantly, however, it feels thematically justified. The story is about Tony coming to terms with his mortality, his self-doubt, by isolating him, cutting him off from his resources. RDJ’s chemistry with both Paltrow and Cheadle remains first-rate, but this is very much Tony’s story. There’s Tony’s investigation into the terrorist attacks, which leads him to a startling revelation that I will refrain from spoiling, other than to say, in the words of a recent superhero threequel, “Theatricality and deception are powerful agents.” It might not have the portentousness of The Dark Knight Rises, or indeed the self-importance, but Iron Man 3 is smart, fun, funny, and surprising, and, if destined to be the last Iron Man film, then suffice to say the series will be going out on a high. It feels, in short, like a clean slate.

Read on at your own risk for some extra spoiler-y tidbits!