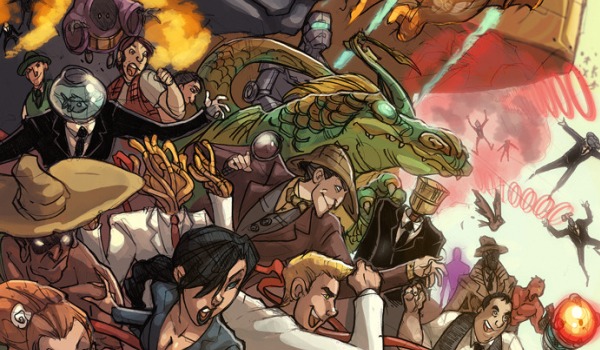 Life and death, good and evil, Heaven and Hell: a few of the grand binaries that define all human existence. It takes a brave storyteller to try and address one pair, let alone three. Jon Lock‘s Afterlife Inc. is just such a tale.

The premise is comparably ambitious: con artist Jack Fortune dies, but rather than going to face eternal judgment, he discovers that his universe’s afterlife, the seven-tiered Empyrean, is in chaos following the Calamitous disappearance of its governing body. Pragmatic by nature, Jack seizes the opportunity to introduce a modern-day business model to the running of the hereafter, effectively corporatising the whole affair. Still, with newly departed souls arriving every moment and no pearly gates to greet them, Jack has his work cut out for him if he’s to stop the Empyrean and all who dwell there from toppling into the void.

While it would be easy for Afterlife to go the satirical route, taking easy sideswipes at earthly capitalism from its heavenly perch, instead it chooses to go the route of Neil Gaiman‘s Sandman: a cast of eclectic supernatural begins, a complex and multi-faceted world. If anything, there are fewer abstractions in Lock’s work – it’s less “dreamlike”, more matter-of-fact, and, if this impacts on the charm a touch, it by no means affects the fun. For a self-published work, Afterlife is a blockbuster and an intelligent one at that.

This first volume, “Dying to Tell”, consists of six vignettes, each written by Lock and drawn by a different artist and each with a distinct style and tone. The first story, for instance, “Final Destination” has its art provided by Art Jackson and provides a suitably dramatic introduction to Mr. Fortune whose sale pitch to a recently deceased commercial co-pilot begins in the deserted remains of his still-plummeting jet. That the jet is being manipulated, toy-like, by a colossal, fiery-maned archangel certainly doesn’t harm the sense of scale any. Jack’s pitch to the erstwhile aviator is a clever way of introducing us to the Empyrean and is aided by some fantastic art work which combines the creature design of Mike Mignola with an artistry vaguely reminiscent of Brian Michael Bendis. Not bad for a first chapter…

The other stories are similarly aspirational: one takes the science-fiction route  (how does artificial intelligence reflect on ideas of the human soul) while another strongly recalls the Hellblazer story “Dangerous Habits” (two blokes sat in a bar talking about “life”). There’s film noir with some haunting visuals by Roy Huteson Stewart (touches of Kevin O’Neill‘s League) and a homage to Alice in Wonderland. It even ends with a humorous “Non-Denominational Holiday Special!”. My personal favorite, however, is Elementary, a Sherlock Holmes story featuring a post-mortem Jack the Ripper and a surprisingly touching denouement. This all pretty masterful stuff with my only point of contention being, perhaps, a lack of character development over its 120 page length. Still, it’s only the first issue and Empyrean, like Rome, seems unlikely to be built in a day.

Lock’s Afterlife Inc. is clever, compelling, and, most of all, original. For this and more, Afterlife Inc. gets ****1/2. Our review of Vol. 2, “Near Life”, will be out sometime soon.