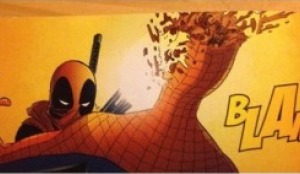 After being (not unreasonably) incarcerated in a mental health institution, Deadpool’s mind is tinkered with, leaving him with a new voice inside his head that pretty much tells him to kill everyone. He turns his tricks to blowing up The Avengers, blowing Spiderman’s brains out and beheading Bruce Banner. He even has a solution to deal with those pesky healing factors: hang ’em in a room with motion-sensor flamethrowers that burn them each time they regenerate. Pretty savage.

Eventually Deadpool decides to kill the writers and then hints that he’ll kill the reader too. I’m still standing, though – well, right now sitting, the point is I’m alive, I think at least. That’s said, Deadpool’s always been unpredictable at the best of times. Who’s to say he hasn’t been biding his time, waiting for a moment of perfect dramatic–

5. No Brainer: Zombie vs. Zombie 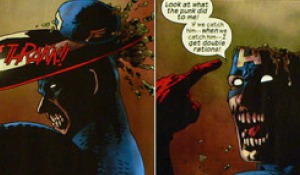 In the first issue of Walking Dead creator Robert Kirkman‘s Marvel Zombies, we see Magneto fleeing for his life before being devoured by a host of meta-human flesh-eaters. As you might quickly guess, this is because the story takes place in an alternate MCU after a zombie apocalypse has turned most of our beloved characters into the ravenous undead.

The super-zombies and super-survivors are understandably pretty much the only ones left with the rest of humanity having quickly bitten the… well, been bitten. At some point, not too long after the Master of Magnetism is munched up, there’s a tussle amongst the remaining undead. In the subsequent chaos, the zombie Red Skull reaches into  Captain America’s zombie head and pulls out the last few chunks of his brain, making him go from undead to just plain dead-dead.

It’s certainly disturbing; indeed, I had half a mind to stop reading it there and then… I’ll show myself out.

4. Ares Get the Axe: Wonder Woman vs. Ares 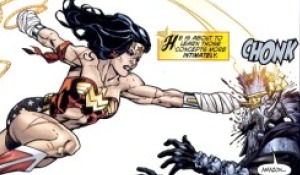 In Wonder Woman Vol. 3 #33, we find another example of the eerie void that’s exposed when a hero or heroine finally murders their opposite number. After Ares launches an attack on Themyscira, Wonder Woman doesn’t mess about, slicing Ares’ skull in half with an axe. I imagine he got quite the splitting headache (again, I’m just… I’m sorry, I have a condition. You think it’s bad for you? For me it’s sheer punishment. Punish… Never mind). Still, Hell hath no fury like a Wonder Woman scorned. “Amazon, what have you done?”… It looks she’s f***ed you up, mate!

So the God of War was finally dead and peace ruled the world thereby ending the need for… oh, nope, mostly he just hangs out in some abstract version of the afterlife being tortured and whatnot. It does make you wonder, however, why more superheroes don’t just off their big bads. It might be a slippery slope and all that, but one life versus the life of millions, one axe blow versus years of picking up the pieces? Well played, Amazon, well played.