3. You Can Run But You Can’t Glide: Scarlett Spider vs. Green Goblin 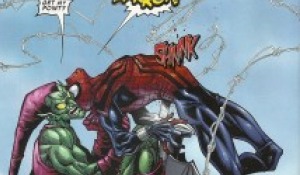 The Scarlet Spider was a little-known but very cool 90’s ghetto-chic clone of Spiderman. He was originally created by The Jackal to kill the web-slinger, but he failed, and due to his having all of Peter Parker’s memories the two became confused, neither of them knowing which was the original. The clone took the alias of Ben Reilly and wandered aimlessly around for a few years before making his own costume and becoming The Scarlet Spider.

He’s more stylish than Spiderman, more tenacious, and above all he has an awesome beard, unlike his more popular counterpart’s clean-shavenness. However, while assuming the mantle of Spiderman, he’s bested by the Green Goblin and skewered by his glider as he sacrifices his life to save Peter. Well, if it’s good enough the the Goblin, it’s good enough for the Spider…

My dinner went cold that night because I was in the woods. Crying.

Okay, so it’s in a video game (Injustice: Gods Among Us), but it still happened in an official publication and that’s good enough for me. It happens after Shazam objects to another of evil Superman’s murderous ploys and you might say Krypton’s Last Son overreacts just a smidge: he freeze breaths Shazam’s mouth shut and then decides to laser vision quite slowly through his head. It won’t appear on the list of approved tactics for your high school debate team, but it does prove fairly effective in silencing critics.

On which note, is anyone else annoyed by the fact that they changed Captain Marvel’s name to Shazam? It’s ridiculous. You can’t just zoom around the place exclaiming your name as a catchphrase; no one can. Well, maybe Batman, maybe, and that’s only because he’s The Goddamn Batman. More to the point, Shazam (formerly known as Captain Marvel) is actually a small child imbued with powers by a wizard and who transforms into a man… when he says “Shazam.” Must make for some awkward introductions. At any rate, the point is that Superman straight-up killed a kid.

And to think people were bitching about Zod… 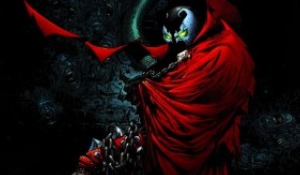 Last but not least, Spawn punches off Thamuz’s face.

Thamuz is a villain from the Spawniverse and the master torturer of hell. During one of the many Armageddons he’s endured, Spawn decides he’s had enough of the guy and punches Thamuz’s face so hard it literally comes off. You probably never heard of Thamuz – frankly neither had I until I started researching this article – but any man who’s had his distinguishing features obliterated, fictional or otherwise, is worthy of our sympathy or at least our intrigue.

You can’t lose much more badly than having your face removed off by a demonic anti-hero; I mean, he’s not even a real honest-to-goodness hero, this is just another day-in-the-life-of for him. Spawn often exacts bloody vengeance on his enemies – being set on fire and damned to Hell tends to shorten one’s capacity for dealing with bulls**t – and violence is certainly common place in the Spawniverse; nonetheless, full facial relocation is always worth making a note of.

Whats your favouritist bloodiest comic book moment ever? Sound off below!