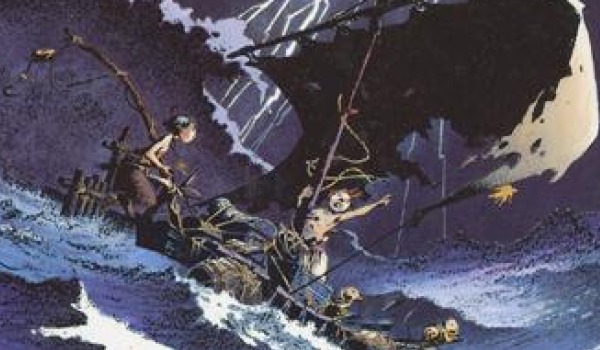 Is there any children’s story quite as iconic, as enduring, as J.M. Barrie‘s Peter Pan? By the time we first meet The Boy Who Wouldn’t Grow Up, he’s been living in Neverland, flying about – arguably the first character in modern fiction to do so unassisted – and battling Captain Hook for many years. How, though, did Peter first learn to fly? How did he earn that mythical surname? These questions have been answered in fiction before, notably in Dave Barry and Ridley Pearson‘s Peter and the Starcatchers, but never quite as satisfactorily as in Régis Loisel‘s graphic novel, simply titled Peter Pan.

Though available in Loisel’s native French for many years, this is the first time that Peter Pan has made it into English; given the three translators credited – Nicolas Rossert, Paul Rafferty, and Nora Golderg – and the eleven years that have elapsed since it was first publish, it has every appearance of a labor of love. Also, at 328 pages long and often over a hundred words of dialogue a page, Loisel’s approach to this prequel to Barrie’s original story is nothing short of epic.

We first encounter the eponymous Peter on a full-page spread that shows him trudging through the snow, flat-capped, a flute in one hand, a bottle of liquor in the other, being investigated by dozens of rats. Peter, red-haired and buck-toothed, spends his days telling stories of his loving mother to a gang of quarreling urchins. The nurturing figure of whom he speaks, however, is a figment of his imagination: the Victorian London portrayed here is the sort of world where a gin-sodden old drunk viciously throws her prepubescent son out on the street to procure her a drink, whatever the price…

A dirty world where whores bare their breasts at the passing youth, inviting him to partake in the sort of activities you now only see on HBO, where bar patrons read something unsavory in Peter’s relationship with a kindly old man, the milieu Loisel establishes is distinctly Dickensian (if Dickens had more of a potty mouth) and as far away from Barrie’s middle-class sensibilities as one can imagine. In Loisel’s take on Peter Pan, even Neverland is terrifying.

Neverland: with its verdant lagoons and its orange sky, its pirates and its Indians, and a distinctly undamaged Hook. Just as we know the lost boys to whom Peter tells his tales will become the Lost Boys of Barrie’s novel, the delight here is puzzling out exactly how events will lead us to that status quo. However, Loisel is not above taking liberties with the original text: while the Peter Pan of lore was always fey and capricious, he’s far from the foul-mouthed, unstable kid here who denounces Tinkerbell as a slut and almost cripples himself when faced with the guilt of a friend’s death.

Loisel’s prequel brings a tangibly Freudian flavor to Peter Pan, one where tragedy and abandonment lead to sexual immaturity and callous violence. The horrifying, bloodthirsty crocodile, as yet to swallow that warning clock, lurks beneath the surface like some psychotraumatic specter. There’s a darkness and a vividness here even in the artwork, the style of which recalls British illustrator Chris Riddell with a color palette typical of Franco-Belgian comics like Garulfo.

There are racist stereotypes in the vein Hergé – a thick-lipped, cowardly Sambo-like character being particularly egregious – almost all the female characters are desperately sexualized, and there’s an unnecessary and unconvincing plot strand that attempts to rope in Jack the Ripper (a persona so beloved of Victoriana) into the Pan origin myth. Despite those reservations, this is very much an origin myth, encompassing madness, fever, and behandings: with distinct undertones of Lord of the Flies: the archetype of Barrie’s Peter was very much one cast in fires of trauma.

Loisel’s Peter Pan merits its length and, this being an omnibus edition, could be consumed in a single sitting by a determined reader. It’s pulpy and fantastical but with an unsettling undercurrent of realism. It’s arguable that the best kid’s stories deal with adult themes in their own way; Loisel hopes in his opening dedication that Barrie is not “rolling over in his grave”, but maybe, given the mature and ambitious tale Loisel’s chosen to tell, it’s not a bad thing if he is.

Peter Pan is available to but at the Soaring Penguin Press site, can be ordered from your local comic shop via Diamond (Order no: MAY132444), as well as most other online services, including Sainsbury’s.