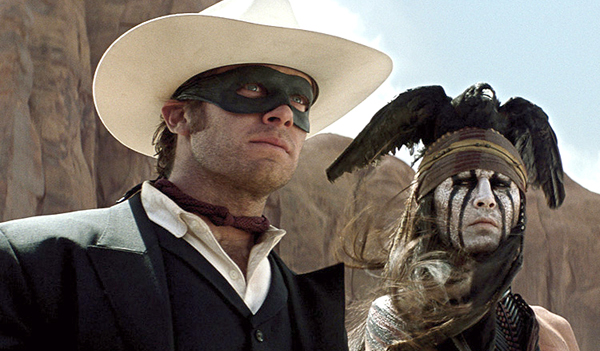 While the film has been far from a success at the box office, it’s hard to see why. The acting is top-notch, if a bit cheesey, as is the storytelling, and the action somehow manages to reach unexpected levels of hilarity. My only real criticism is that, as a PG-13 Disney film, it’s hard to tell who the intended audience is supposed to be. At times it’s a bit silly and childish, but at other times it gets quite dark. However, anyone who’s seen Pirates of the Caribbean or John Carter will find themselves in familiar territory.

The story, told by an ancient Tonto, is centered on John Reid, a lawyer who returns from years of studying in the city to a small town in 1869 Texas. When dangerous criminal Butch Cavendish escapes from custody, Reid joins his brother in a posse of Rangers out to find him. But Cavendish and his men kill the Rangers, and nearly kill John. John returns from the dead, bent on bringing Cavendish to justice as the Lone Ranger. Helped by Tonto, who also has a score to settle with the bandit, the pair uncover a plan that involves the Comanche Indians, the continental railroad, and a whole lot of fun adventures.

Johnny Depp is on rare form as Tonto, and proves that Gore Verbinski is just as skilled (if not more so) at directing/utilizing the actor as as Tim Burton. The running gag of him feeding the dead bird on his head never gets old, and his one-liners are as funny as they have ever been. Armie Hammer, meanwhile, shows that he has true star potential, not to mention charm, as the titular masked hero. While one might think Helena Bonham Carter to have a starring role as well from the marketing, she appears in only a handful of scenes and, while memorable, the film is better off for it. In an odd turn, William Fichtner gets to ham it up as the villainous Cavendish, chewing the scenery with his curled lip and silver tooth.

Much like Pirates, The Lone Ranger relies heavily on Depp for comic relief, although thankfully he doesn’t overdo it this time (COUGH Alice in Wonderland, Dark Shadows COUGH). With this marking the first version of The Lone Ranger where Tonto receives top billing over the Ranger himself, the tale almost makes Tonto the protagonist and the Ranger the sidekick.However, with Depp managing to take the character right up to the edge without crossing it, his is easily the most enjoyable performance and will likely be as iconic as Jack Sparrow – excuse me, CAPTAIN Jack Sparrow.

It is also worth noting that, while not in the trailers (for reasons completely unknown to me), the film does include a rather triumphant use of the William Tell Overture, the classic Lone Ranger theme song. In fact, the first scene where the song is used, early in the film, should really have been used as the original teaser trailer, because it really does get at the tone of the film. It also provides the film with one of the most hilarious climaxes I have ever seen in an action film, let alone a Western.

Like any summer popcorn film, The Lone Ranger has its flaws. For me, the character of Rebecca, played by Ruth Wilson, best known for playing the psychopathic Alice on Luthor, was rather unsympathetic. Most of the moments when she was in danger, it felt like I was only supposed to care because “Look! There’s a woman in danger!” but not actually because of anything specific to her character. Helena Bonham Carter’s character, with a fraction of Rebecca’s screentime, still manages to be more sympathetic from her first scene. But female characters often fall into that trap in action films, so it’s hard to criticize the whole film for this one failing.

Another easy shot to take would be to say that the plot isn’t especially imaginative, but the restrictions of the genre mean that of course the story has to revolve around trains and Indians and precious metals. To condemn a Western like this, especially these days, for being unimaginative in that respect is akin to saying an action movie is ripping off Michael Bay because it has lots of explosions.

Combining humor, action, and a clever twist on the superhero narrative, The Lone Ranger rather surprisingly succeeds at being exactly what it’s supposed to be: a fun adventure film. And really, any film where the horse gets to be just as ridiculous and outlandish as Johnny Depp wearing a bird on his head is worth seeing. Hi ho, Silver, and away! 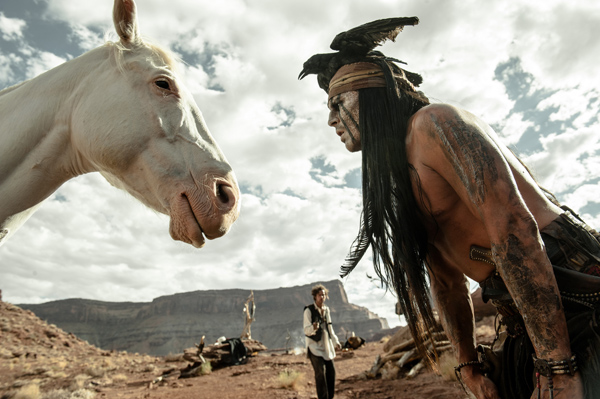