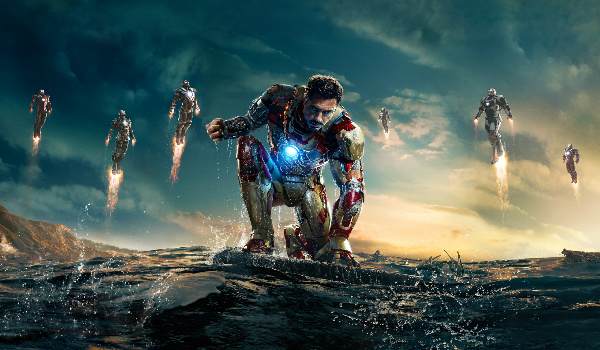 The last two years have certainly have been interesting for superheroes at the box office. For every Iron Man 3, we’ve had a The Lone Ranger. There have been hits, and there have been misses. The diverse range of superhero films on offer has certainly led to some unexpected results.

We all knew that Iron Man 3 was going to be a heavy hitter at the box office, but who would have thought that it would have gone on to gross 1.2 billion, especially when its predecessors grossed $585 million and $615 million respectively? The biggest explanation for its giant gross is that it was viewed as being a follow up to The Avengers, the third highest grossing film of all time, rather than the third entry in a trilogy. Iron Man is by far the most bankable of the Avenger’s rooster, and the fact that Iron Man 3 grossed over $100 million more than The Dark Knight Rises, despite the fact that Batman is still a far more well known and iconic character, shows the influence of The Avengers.

The Avengers’ gross was so high, of course, because the previous Marvel Cinematic Universe movies had basically been feature length trailers. Ever since Samuel L Jackson mentioned The Avengers Initiative to Tony Stark in Iron Man’s post credits scene, we had four years worth of hype to get our anticipation up. Combine that with huge star power, the overall popularity of superheroes at the box office, and the popularity of its characters, and The Avengers was sure to be a hit.

The Wolverine opened in the US to $55 million, placing it at number one, although this was significantly lower then X-Men Origins: Wolverine’s opening of $87 million. So far, The Wolverine has grossed $317 million worldwide, and looks like it will just about overtake the original X-Men‘s gross, making it only the second least profitable X-Men film. Perhaps the success of the Marvel Cinematic Universe has made viewers tired of the X-Men franchise, or perhaps audiences were so caught up in the success of Les Miserables that they no longer want to see Hugh Jackman playing such a brutal and savage character. It was widely believed that the reason why X-Men: First Class underperformed was because of the fact that people did not want to see an X-Men film without Wolverine, (albeit in a brief cameo) although perhaps they want a few other mutants thrown in for good measure as well.

After Superman Returns’s disappointing gross of $393 million, it looked like the Superman film franchise was dead until it was rebooted from the ground up. Man of Steel’s worldwide total sits at $619 million. Not bad considering that it is the first in a franchise and does not have the benefit of the popularity of its processors to draw in audiences, as well as the stiff completion that it faced from Iron Man 3. Its gross is also significantly higher than Batman Begins’ $374 million, which is certainly a good sign. Now to see what the Batman/Superman team up holds.

Speaking of origin stories, last year’s The Amazing Spider-Man grossed $752 million worldwide, making it the lowest grossing Spider-Man film yet. This was likely due to the five year gap between it and Spider-Man 3, reducing the character’s cinematic popularity, and although Spider-Man is in Marvel’s A-list, perhaps audiences simply don’t want to be constantly bombarded with superhero films. Spider-Man is possibly even Marvel’s signature and most well known character, and yet the film grossed considerably less than Iron Man 3, a testament to the popularity of the Marvel Cinematic Universe. Although having said that, The Amazing Spider-Man did outgross all other stand-alone MCU films, so there is certainly still life in the character.

But fear not web-heads, because the sequel, in addition to containing about a million villains, will almost certainly out gross its predecessor, as sequels often do. Who knows, maybe it will even do a The Dark Knight and gross more than two and a half times as much as the first film…

Kick-Ass 2 opened to a disappointing $13 million in the US, significantly less then its processor’s opening of $19 million. The film also opened to a low $6 million internationally, meaning that it will probably gross less than the first film’s $96 million, which was just about enough to guarantee a sequel in the first place. A three year wait, along with Jim Carrey, who was the most bankable star of the film, only appearing in two nationwide releases over the past four years and refusing to promote the movie due to its level of violence, would be the reasons for the film grossing lower than expected.

While Kick-Ass 2’s box office may seem like a disappointment, its budget was only around $30 million, so it will undoubtedly break even, although a third film now seems like a long shot, despite being clearly set up in the film and the comics.

And The Lone Ranger? Well, it bombed. The film was briefly shut down after the box office failure of Cowboys and Aliens, as it was believed that a fantasy western crossover clearly was not what the box office needed. The film was eventually made, however, and so far has grossed just $196 worldwide, which, considering its $215 million budget, means there won’t be a sequel.

And let’s face it, the Western genre is dead. Westerns are also so distinctly American that they are infamously difficult to sell overseas, and even with Johnny Depp’s bankability, a western is still a western. Armie Hammer, who plays the title character, was also not ready at this stage of his career the have headlined such a huge film; after all, he was relatively unknown before The Social Network’s release three years ago. And with the exception of J.Edgar, he’s hardly had a successful career since then. Not an ideal choice to headline a $215 summer blockbuster. They clearly must have been relying on Depp to carry the film, with Disney clearly becoming overconfident because of Depp and director Gore Verbinski’s success with the first three Pirates of the Caribbean movies.

And it’s no great shame that we won’t be getting a sequel, after all,  who want’s the sit through 148 minutes of watching Depp wearing a dead bird on his head anyway?

See what I mean?

But still, it could be worse, after all the last superhero Western film was Jonah Hex, and that only grossed $10 million dollars worldwide, as well as only being 78 minutes long (shudder).

So what has the performance of superhero films at 2013’s box office told us? Possibly that audiences are slowly beginning to tire of the superhero genre, although as Iron Man 3 reminded us, we still have a very, very long way to go before that truly happens. Possibly that Marvel will never stop making Iron Man movies, although to be honest that looks less like a possibility and more like a certainty. If anything, 2013 taught us that despite some underperformances, superhero movies are here to stay.