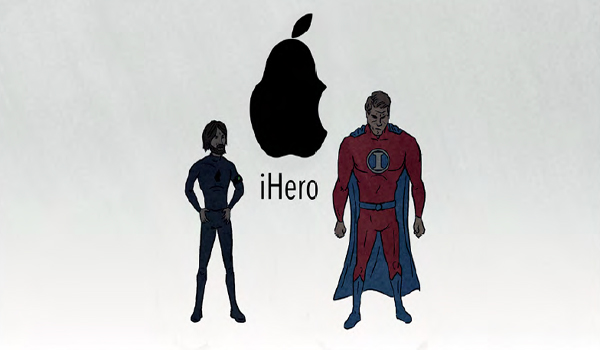 The iHero, a simple little app that gives every single person what they have always wanted… superpowers!

That’s right, superpowers, simply by downloading an app to your mobile phone and deciding which power you wish to have control over. Written by Luke J Halsall and brought to life by Graeme Kennedy, this is the story of everyday civilians like you and me becoming bona fide heroes and villains.  Now, as you can imagine, the demand for this sort of service is overwhelming, but for the few lucky people who get their hands on it first it gives them the unique opportunity to acquire the ability they’ve always dreamed of.

Released upon the world – except China where it is banned – all nature of characters have access to the iHero, and, as always, some decide to use their powers for good and some for evil. Now, this isn’t your standard “hey let’s take over the world” sorta evil: it’s more a case of one guy who uses his teleportation powers to cheat on his girlfriend. Which leads to a hilarious panel in which his girlfriend finds out and uses her iHero power to zap his penis away. Bazinga! There are also the mundane users of the iHero, such as the guy who uses it to finish all his paper work in a matter of minutes. Now I know you’re thinking this is a pretty practical use of an ability, but would you really waste a dream-come-true on office work? What this comic needs is a little chaos and mayhem, and thankfully a few of the villains in our story think the same with looting, bank robbing and general crimes at all time high something needs to be done to combat this threat.

Halfway through we finally get a glimpse of the creator of the iHero, Jack Taylor, the very first hero to be created by the app. In the wake of the rising crime levels to hit the city, Jack decides he cannot do this on his own and seeks the city’s premiere and only original hero, Icon, a clever name for a superhero devised by Luke in that he is a symbol everyone look ups to. Part of the reason many of the users of iHero are so keen to become icons of their own.

Jack enlists Icon to help set up the very first ‘Heroes Institute’, pulling at heartstrings and memories gone by which he was worshiped as a god in order to draw him out of retirement for one last chance of glory. With Icons very own daughter Inamormia the first to be enlisted – though they share a frosty relationship at best and she craves a normal life away from crime – the team is then completed with the conversational Sovereign. Not much is known about this caped superhero as yet but she seems as the wildcard of the group, the one that plays outside the law to get results.

With everything set in motion to help reduce crime, our heroes suffer a great loss when they discover that Jack has been murdered. Unsure of what to do next Icon and Inamormia put their differences aside for the better good. Along with Sovereign, our trio is now entrusted to find Jacks killer, run the institute and save the city. Is it going to be too much for these three misfits who don’t get along and find it near on impossible to work together? With the comic drawing to an end, Sovereign is on the trail of the perpetrators and sneaks into a building only to be ambushed by a mysterious villain who erases her memory. Dazed and unaware what sort of trouble she is in, Sovereign is then approached by super-powered security guards as the comic draws to a end…..

All in all, iHero is not a bad first issue with a nice little cliffhanger at the end to keep us hooked and could develop into a nice series if played out in the right manner. The artwork, though a little crude and slightly amateurish, works well with the storyline and the off-kilter tone of the story. With so many more stories to tell and unanswered questions to account for – Who is Jacks killer? What will happen next to Sovereign? What does the eponymous app really mean for the world? – I personally will give this comic the chance it deserves.