In life, you will meet two people. Those who love Christmas and those who hate it. I… am neither of those people. Gasp! Oh, please don’t ask why, I don’t quite know the reason. Maybe it’s because my shoes are too tight. It could be my head isn’t screwed on just right. But I think that the most likely reason of all is that I am a soulless husk of a person who cannot experience joy in any shape or form. What? You thought that my heart is two sizes too small? Don’t be silly.

So… yeah, I’m not all that big on the Christmas thing. I don’t hate it, I like it fine. I just don’t get swept up in all the yuletide muckety muck. That being said, There is one thing I do love about Christmas… The Muppet’s Christmas Carol. Oh, and weird as hell superhero Christmas stories! We’ve all read or seen a few of them. They’re fun, they’re silly, they’re so chock full of mistletoe and seasonal joy that it makes me want to strangle an elf! That being said, here’s a list of what I think are the strangest superhero Christmas stories. 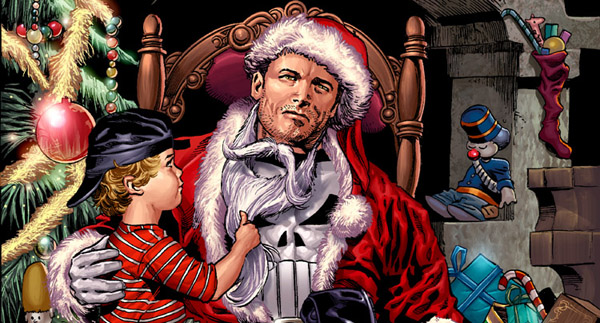 Frank Castle kills Santa. Okay, not really. But it’s pretty up there in terms of disturbing Christmas stories. So, it’s Christmas Eve in New York and the Punisher is about to go about his annual holiday tradition: killing criminals. Okay, that’s more of a daily tradition for him than anything else. But he uncovers info about a mobster who is planning to kill a former gangster who turned states evidence against his father. Ah, a classic Christmas tale. He finds another criminal who has turned a new leaf and is a Father Christmas in a shopping centre. He beats and nearly kills him in order to get more info… in front of several children. I’m sure that won’t leave any lasting emotional trauma! Frank then infiltrates an orphanage dressed as Santa (as you might have guessed, not a very jolly one) and finds the former gangster, using him as bait to catch the other criminal. You with me so far?

Things go about as well as you’d expect. He gives a shotgun to a priest in order to protect the orphans, kills all the gangsters with explosives, drowns the mob boss, the criminal who was dressed as Santa gets stabbed repeatedly and the Punisher kills the gangster who he used as bait and then dresses him up as Santa for the orphans to find. Well, I don’t know about you, but I’m just about ready to kill myself this is so depressing.

9.  Batman The Animated Series: Christmas with the Joker

Regular readers of my articles (a man can dream, can’t he?) will know that I loathe Batman with all of my shrivelled up heart. But I do like two things about him: the animated series and the Joker. And both of these things come together in the episode “Christmas with the Joker”. And yes, you’ll be pleased to hear, they get the “jingle bells, Batman smells…” gag over and done with almost immediately. I say “done with”. Ugh. Let’s take a look.

So it’s Christmas time in Gotham and Robin wants Batman to watch It’s a Wonderful Life with him. But then, oh no! The Joker escapes Arkham Asylum by riding on a rocket powered Christmas tree. Uh… what? How does that work? When did he find time to make that while incarcerated? How would he even go about it? Wait, you know what? It’s Batman. I should be bringing too much logic into it. So it’s up to the dynamic duo to stop the Joker from killing Commissioner Gordon, Harvey Bullock (hah! “Bullock”) and some other person that I don’t care about and save Christmas!

Along the way, they encounter a killer observatory telescope, destructive toy soldiers and a runaway train. And, in a scene that made me smile so much I scared the neighbour’s children, the Joker gets Batman in the face with a cream pie. Words cannot express how funny that was. Top it off with Mark Hamill as the Joker singing Christmas carols and you’ve got a perfect Batman related Christmas story. I say “perfect”, Batman was in it sooooo… I hate Batman so much. But on the plus side, this episode is also the very first appearance of Harley Quinn, so that’s something too.

BWA HA HA HA HA! OH GOD, IT’S SO STUPID! HA HA HA HA! Oh my word! This… this is so… even for He-Man this is stupid! How could anybody think this was a good idea? Let’s have a look and see just how… HA HA HA HA!

So, while everyone is preparing for Adam and Adora’s birthday, Orko manages to accidentally travel out of Eternia and finds himself on Earth. As you do. There he meets two small children who teach him about Christmas rather than asking questions like “Who are you?” “Where did you come from?” and “Why don’t you have a face?”. He-Man and She-Ra manage to transport Orko back but inadvertently bring the kids along as well. Meanwhile, Skeletor and Hordak are told by some guy called Horde Prime to capture the children in order to stop the “spirit of Christmas” from entering Eternia. I swear I’m not making this up.

So after the kids sing a brain haemorrhage inducing Christmas song, they are kidnapped. Luckily, they are rescued by a bunch of character, obviously meant to sell a new line of toys, called the Manchines. I really do wish I was making this up. But after that they are kidnapped AGAIN by Skeletor and… can I just sum up now? Skeletor gets the Christmas spirit, helps the kids, He-Man and She-Ra rescue them, send them home and they all celebrate Christmas with Adam dressed as Santa, hoo-bloody-ray! You want some 80’s cheese with a Christmas theme? This is for you. I hope you’ll be happy together.