Home » SECOND LOOK: Superman: Whatever Happened to the Man of Tomorrow? 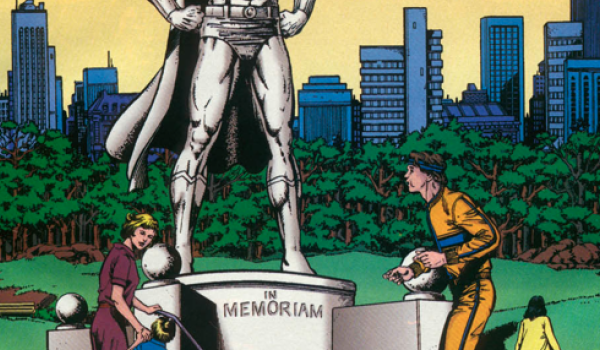 Classic superhero comics are an acquired taste in these cynical times: too earnest, too silly, too lacking in anything resembling irony. That being said, it’s a brave move to try and tell a Silver Age story, especially when you’re telling a story that attempts to put a cap on one of its most iconic characters, none other than Superman himself. It’s a rare challenge and opportunity that’s faced that’s just lucky to be in the safe hands of legendary comic book writer Alan Moore. It’s hard to imagine anyone pulling off quite the coup he does in Superman: Whatever Happened to the Man of Tomorrow?.

When Man of Tomorrow? opens, you are initially left in no doubt as to Superman’s fate: “This is an imaginary story (which may never happen, but then again may) about a perfect man who came from the sky and did only good… Superman died ten years ago.” The page opposite shows an ordinary day in Centennial Park, Metropolis, and a memorial to the fallen Man of Steel. Skip back a decade and an idyll in the city’s history is cut short by a rampaging Bizarro who massacres a bunch of civilians before taking his own life, but what prompted such unaccustomed brutality?

Many villains from that era of comic books have fallen out of favor for being gimmicky or otherwise ludicrous. It’s hard to imagine the likes of Toyman or Prankster posing a serious threat to the modern iteration of Superman. Here they manage what – though frequently promised – few villains ever have. Soon enough, Superman finds his whole rogues gallery has turned suddenly lethal. The narrative that book-ends Man of Tomorrow? shows Lois Lane happily remarried and giving an interview to The Daily Planet in presumably the present day. It seems that even she has got over the planet’s former savior.

What’s most impressive about Man of Tomorrow? is that it manages to turn the cheesy and the familiar into something truly touching. In a face-off outside the Fortress of Solitude, Jimmy Olsen and Lana Lang take on the Legion of Super-Villains and almost certain death, despite knowing that they’re “only second-stringers”. There are deaths aplenty but also rebirth: a time-traveling Supergirl makes an appearance, having been killed off the year before in Crisis on Infinite Earths. The brief conversation that Superman shares with her is nothing short of miraculous.

One of the story’s only disappointments is its treatment of Lex Luthor, arguably Superman’s arch-nemesis, reduced to a puppet of Brainiac. Luthor only really shines when he’s the one pulling the strings, so to see him reduced to a lackey makes his involvement in this, the last Silver Age Superman story, notably anticlimactic. That being said, Man of Tomorrow? succeeds where it’s most important: as a love letter providing resolution to thirty years of superhero history. It manages this while being neither mawkish nor predictable. Even with Alan Moore as writer, that’s something pretty remarkable.


But what do you think? Did Superman: Whatever Happened to the Man of Tomorrow? provide the closure you needed for the classic character or do you wish the story – the last to feature DC stalwart Curt Swain as artist – had gone another way? Sound off in the comments or send us your thoughts on Twitter!