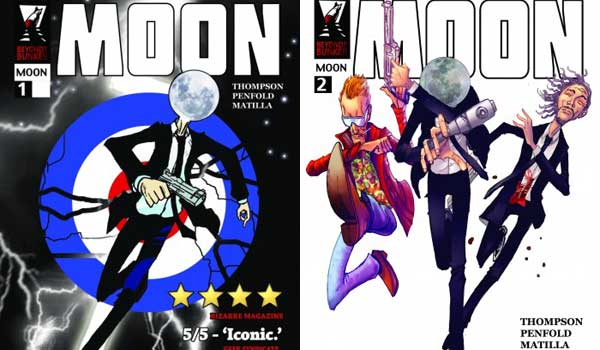 Written by Dan Thompson, Moon is a fast-paced, action-packed comedic crime spoof. The painstakingly exquisite and impressive artwork by Ivanna Matilla and Steve Penfold increases the pace at which the story is unfolded to the reader.

On seeing the front cover of a literal moon faced agent and reading Thompson’s short blurb, I was rather intrigued and curious to know how one could possibly personify a “crime–fighting, earth-based satellite”. Once I proceeded with the comic, the writer pleasantly threw my expectations of a standard superheroes good versus evil plot to the wind.

Thompson’s story begins in 12AD; a barren and isolated part of England. Without wasting time, he pushes the plot forward with a dialogue between two characters attempting to summon the moon. The tension and strangeness of this idea is diffused through the comic banter between the characters. This ends upon the arrival of the Queen, which helps the reader to understand the transitional process of this ritual. The reader may then assume that the story is about a fantastical world. But upon proceeding, it becomes clear that Thompson has connected the past with the future of Britain, and there is more depth to this story than what is presented at the start.

Through the use of a slapstick presentation, the ritual fails to flow according to plan. Through a series of detailed yet succinct images, the reader sees the moon encapsulate the incompetent character. The intensity of this process is lightened through the use of the colours used. Matilla’s delightful artwork has transformed, from dark and mysterious to brighter daylight shades that highlights the ludicrousness of the situation; a moon faced halfwit who shall bear the responsibility of saving Britain.

The unpredictability of this comic is what kept me extremely curious. Thompson hints at possible plots quite consistently, the first one being revealed through the anger of the Queen who now wishes to kill Lord Moon as he escapes from the world of 12AD.

Instead of continuing with the story between the Queen and Lord Moon, Thompson catapults the reader into modern day London. Rather shockingly, a murder crime scene is taking place. Matilla’s skills in creating an accurate depiction of London is magnificent. The only difference is that it is from the perspective of two agents from the Agency, one of which is Lord Moon. The reader is taken into the heart of the crime, through the satellite investigation of discovering who killed the Councillor. As this comic is defining a new genre of, a comic crime that does not take itself seriously, the murderer is discovered to be a baby.

The ensuing scenes are filled with great one-liners, such as: “You wanna dance with the devil, perp? ‘Cos I got the music ready to go”. The action words that accompany the abrupt fight with the parking inspector: “huff, snatch, shmak, krunch” helps lead the reader to the true genre: a spoof of partners in crime solving shows. Personally, it brought to mind, the Simpsons’ “Bad Cops” parody along with original Starsky and Hutch. 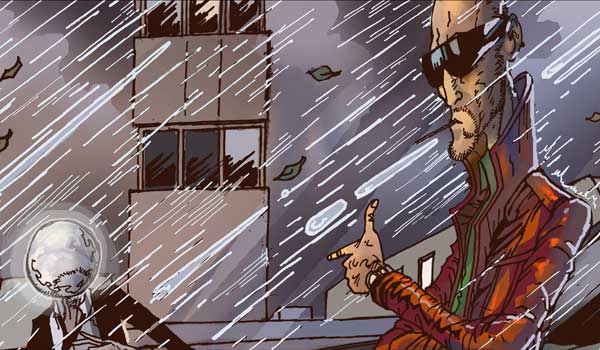 After a brief conversation between Moon and his partner (mostly the partner, as Moon doesn’t talk), we are treated to another a fight scene, in which a Robocop-looking character unexpectedly shoots Moon’s partner.  I particularly admired Matilla’s artwork at this point, as it really showed the power of art. Without any words, the readers feelings are attuned to the horror and fast paced violence in the life of an agent. Thompson leaves the reader hanging as a spectator amidst the shattered remains of the diner, the death of the agent and Lord Moon captured by a group of perpetrators.

Luckily for me, I had the second issue available and read it immediately after feeling unsettled by the previous cliff hanger ending. Even though Moon is trapped in a losing situation, an unlikely hero comes to his rescue. I enjoyed this twist in the story, and what was really great was how I could not predict what would happen, this is undoubtedly a real display of originality that a lot of writers and artists lack. I am quite sure that this is one of the reasons why the comic book series has a strong fan base.

I have really enjoyed this comic book and am grateful to have read it. The artwork was really incredible along with the great and unique story line. I do hope that Thompson, Matilla and Penfold continued to find the much deserved success for all the hard efforts that has been put into this wonderful comic.

Find out more about Moon on Beyond The Bunker’s Official Website.