Home » INTERVIEW: Jon Lock, Writer/Creator of THE BOOK OF LIFE 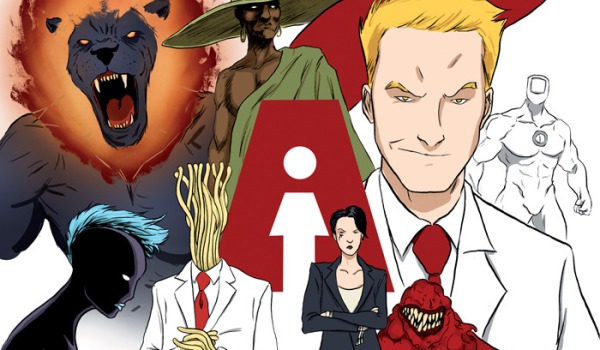 Today we sat down for a chat with Jon Lock, writer and creator of top-notch independent comic Afterlife Inc. Lock is currently running a Kickstarter campaign to fund a new collection, The Book of Life.

AP2HYC: Can you tell us a bit more about The Book of Life?

JL: The Book of Life is the deluxe hardback collected edition of Afterlife Inc. volumes 1-3. At 376 pages it comprises the entire Afterlife Inc. story to date: the sum total of 3 years spent at play in the world of Jack Fortune and Co. Alongside the old stories are 70 pages of special features, including pin-ups from a host of talented artists, character profiles, behind-the-scenes material, a guide to the afterlife and even a brand new Afterlife Inc. tale. This is a major landmark for the series and the start of new things. The Book of Life is the definitive version of the story so far.

AP2HYC: Where did the idea for the series come from?

JL: Probably caffeine and sleep deprivation! When I first had the idea for Afterlife Inc., way back in 2007, I was living and working in Canada, alternating just above and below the breadline. I’d always wanted to write comics – it was my calling – but had precious little to show for my ambition. I needed a fresh start. Working in a coffee shop and adapting to a hyper-caffeinated environment, I somehow hit upon the idea of a murder mystery set in a multi-tiered afterlife. This very quickly morphed into the tale of a con-artist taking over the afterlife and reimagining it as a business. All the pieces were very nearly in place. I knew my hero would have a long tie. I knew his best friend would be made of gold metal. With the name “Jack Fortune” everything came together. I guess the rest is history.

AP2HYC: So what is The Empyrean and what can you tell us about Jack Fortune?

JL: The Empyrean is the afterlife, a strange golden construct with seven layers floating in an otherwise endless white void. Neither heaven nor hell, no one knows who built it, but following a mysterious Calamity the former ruling body has been wiped from existence, leaving a power vacuum just waiting to be filled. When con-artist Jack Fortune dies he discovers a business opportunity on a previously unimaginable scale. Assembling a ragtag group of angels and allies, Jack takes over, restructuring the afterlife as a modern day corporate entity: Afterlife Inc. Modernising the Great Beyond is one thing, but now Jack must explore the dark secrets at the heart of the Empyrean – and given his own mysterious past, it’s only a matter of time before skeletons are unearthed.

AP2HYC: What’s been your favourite story to tell?

JL: Having self-published volumes 1-3, the biggest limit on creativity has always been budget. I want to make high quality books. I believe in paying artists for their work. Sadly, as I start telling larger, more ambitious stories, the costs also rise. That’s why working on volume 3, “Lifeblood”, which I successfully Kickstarter back in November 2012, was such an incredible experience. Thanks to the generosity of my backers, I was able to fund production of my first long form story. I learnt a lot in doing, and there’s always room for improvement, but I hope “Lifeblood” stands as an example of the kind of stories I want to tell in the future.

AP2HYC: Who’s been your favourite character to write for?

JL: Is it too much of a cop out to say “everyone”? I’ve always liked books with a large central cast. I love interactions and playing different characters off against each other. Your characters are like clockwork soldiers. Wind them up, place them in any scenario, and they should each act according to their nature. At that point you’re basically just recording their conversations on the page.

There’s a little bit of me in each of the main Afterlife Inc. board members. Jack is, of course, fantastic fun to write. He’s the kind of guy who has an answer for everything. He appears confident, but if you look closely there’s a kind of vulnerability there; a hollowness. He’s playing the part everyone needs him to be. With just a bit of confidence, a winning smile and lot of luck he can generally talk his way out of any crisis. Others may fall, but for better or worse, Jack always comes out smelling of roses.

AP2HYC: What are your greatest influences/inspirations?

JL: Discovering the work of Grant Morrison was a real revelation. I’d read comics before as a kid but it wasn’t until a chance encounter with his seminal run on JLA that they really started to make sense to me. Regardless of the genre, there’s a certain… weirdness to Morrison’s work that gets under your skin. His comics can be unsettling. Difficult to forget. It reminds me of the strange allure of comics in general. Once you get the bug it’s very hard to shake it. Clearly they’re fulfilling some deep psychological need.

Other that Grant Morrison, I’m a massive fan of Warren Ellis, particularly his run on Planetary and that magical blend of wonder, science and righteous anger it carried. Closer to home, two major influences on Afterlife Inc. were Alan Moore and Gene Ha’s Top Ten, and Joe Casey and Dustin Nguyen’s Wildcats 3.0. Both series merged the mundane and the fantastic to great effect, in a police procedural set in a city of superhumans and a business run by former heroes respectively.

AP2HYC: Who are some of your favourite comics/artists/writers?

JL: As mentioned above, Grant Morrison and Warren Ellis definitely rank among my favourite writers, along with Jonathan Hickman for The Manhattan Projects, Matt Fraction for Casanova and the insanely talented Joe Hill for the insanely brilliant Locke and Key. It’s so good it hurts.

On the art front, Dustin Nguyen, Frank Quitely and Olivier Coipel are responsible for some of the most beautiful drawings ever committed to paper. It would be an absolute dream to work with any of them.

AP2HYC: What are the worst and best super powers you can imagine having?

JL: As a man whose physique has never matched his lofty goals of superheroism, I’ve always been a fan of “internal” powers: those with no obvious visual tell as to how they work. Take the Doctor from The Authority, one of my all time favourite superheroes. No super strength. No bulging muscles. Just a scrawny guy with red hair, cool goggles… and the ability to shuffle reality like a deck of cards. The Doctor can do anything – anything – he can imagine: step outside time and space, reshape matter… The only limits are his creativity and focus, which, seeing as he’s a reformed heroin addict, leave something to be desired.

Worst power imaginable? Well, how about alcohol-fuelled super strength? The drunker you get, the stronger you get. The obvious downsides being impaired judgement, the all too real risk of passing out and the inevitable hangover the following morning. With great power comes crippling headaches and nausea, as they say.

AP2HYC: What have been the most daunting and most exciting parts of the project so far?

JL: Having run a Kickstarter before, I’m lucky in knowing what to expect. This time around, older and slightly wiser, I was determined to minimise stress as much as possible. Part of this involved number crunching and researching to the nth degree. The exciting part is the prospect of bringing a new project, something you could never achieve on your own, to life with the help of your backers. The daunting part is making sure you’ve calculated all your costs in exacting detail. The last thing you want is any hidden surprises!

AP2HYC: What made you choose to hold a Kickstarter campaign?

JL: Kickstarter has opened so many doors for indie creators. Steep production costs might once have prevented a project from ever getting off the ground. With crowd-funding you can achieve more than you ever could on your own while hopefully also delivering a great product to your backers. In theory, everyone wins. There are risks, obviously, and when you’re dealing with other people’s money the last thing you want is to let anyone down, but with proper planning there’s no reason it shouldn’t work out. Simply put, I could never have reached this point with Afterlife Inc. without the incredible support of my fans and backers. Their faith in the project has made all of this possible and I’m immensely grateful for their help.

AP2HYC: What can you tell us about your future plans for the series?

JL: Work is already underway on Afterlife Inc. volume 4: “Man Made God”. Books 1-3 were my training ground. Having established the world, the time has come to tell the true story of Jack and his company, an arc I’ve had planned ever since the beginning. Bigger ideas mean bigger stories, however, and once the Book of Life Kickstarter is over I’m going to seriously consider the future of the comic. Self-publishing has been a great experience but the time might have come to take the comic to a larger platform.

AP2HYC: What’s next for you as a writer?

JL: In addition to the future tales of Afterlife Inc. I’m currently developing several concepts aimed at younger readers. I’d also like to return to the world of The Six, a comic I previewed at London Super Comic Con last year. Perhaps most excitingly, however, is some of the work I’m doing alongside Nich Angell as part of our shared Big Punch Studios imprint. What began with the Heavenly Chord, a crossover between the worlds of Afterlife Inc. and Nich’s comic 7STRING, has spiralled into something truly unique with big implications for both our universes.

AP2HYC: Any other questions you wish we’d asked you?

JL: “Would you like a biscuit?” There are few situations that can’t be improved by the addition of a digestive. Plain, mind you. Life is exciting enough!

You can find the link for the now-live Kickstarter here.

And that just about says it all, really. You can check out our reviews of the first three issues of After Life Inc. here, here, and here, and our review of Lock/Angell collaboration Heavenly Chord here.