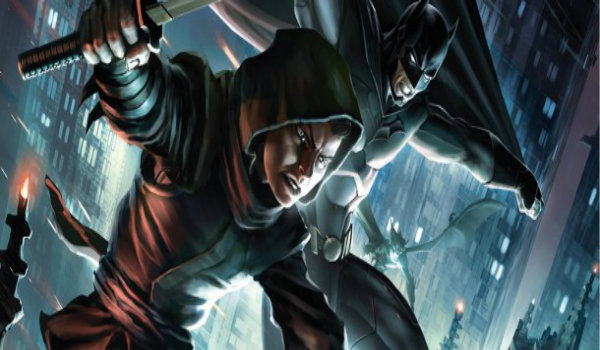 You know there are very few characters in comics who elicit the type of fan service and fanfare as Batman. I mean does anyone remember how controversial Batman and Son was back in 2006? Yes, it was a great storyline which featured some iconic moments in Batman history but it is more famous for one reason: the introduction of Damian Wayne. Slowly over time, Damian developed from a one note revenge driven psychopath to a multifaceted revenge driven psychopath. That is something that few characters get especially Robins who are often reduced to being only Batman’s foil. It was obvious that eventually the DCAU would tackle this story and it is safe to say it is indeed one of the stronger entries in the series. Some of the details of the overall story have been changed to make the story not as out there but a lot of the stronger material remains.

One of the stronger points of the entire film is that they manage to nail Damian’s persona right down to the letter. Damian is constantly searching for the approval of those he loves, whether it be his father, grandfather, or mother. Damian is constantly forced to choose between doing things the right way or the assassin’s way. You can see this in his speech patterns and how he interacts with Nightwing; Damian has an innate desire to belong to this new family after his old one is basically wiped out by Deathstroke. What managed to make his performance so enjoyable is that Damian loves being challenged and the rush that comes with being Robin, in that way he takes the best qualities of multiple Robins and mashes them together. It also helps that Damian, being the youngest Robin, creates some unique fight situations. If anything Son of Batman manages to recapture the fluidity of the gone-too-soon Young Justice. His fights with both Ubu and Deathstroke have so many layers and changes to them that I was shocked at how intricate they were.

As for Batman, I felt that he was surprisingly under utilized in terms of what was given to him and what he did for a large majority of the story. I mean Jason O’Mara’s Batman gets all the basic Batman moments of solving crimes, looking intimidating, and being an all around badass but he often does not get the big being a father moments which you see in the original storyline. Part of this is due to the material which was removed from the story and other parts are just due to the pacing. Make no mistake this is a very tight 74 minute runtime with very little room for maneuverability. If the story was afforded possibly another twenty minutes we could have really seen the ramifications of Bruce learning about his son. Bruce doesn’t so much as treat Damian like his son but rather more like your basic student-teacher relationship. This does show how fractured Bruce is but it also robs us of the stronger story moments. If anything, Nightwing has the stronger connection with Damian than Bruce ever does during the film.

Nightwing, in the brief scenes he has, manages to be one of the highlights of the film. His banter with each of the characters was just the right amount of Dick Grayson wit and serious back and froth. If this is laying the seeds for the Dick Grayson as Batman film I can now totally see Sean Maher in the suit. His back and forth with Damian is top notch and definitely the second best material of the entire film (with the first being Damian and Alfred).

Something I really enjoyed about the film was how dark and violent the entire affair is, with highlights being Batman’s interrogation of Killer Croc and Damian’s fight with Deathstroke. This is easily one of the darker DCAU films right up their with Flashpoint Paradox but none of the grit feels out of place in the story. I did however feel that some of the language used by Deathstroke was a little extreme even given the character’s nature. I mean he calls Batman Talia’s sperm donor at one point and it seems to only happen for shock value rather than attempting to elicit a reaction from Talia. Luckily the material works out in the end and the humor of the piece really gels it.

With the villains of the piece they are largely hit or miss in terms of performance with Talia being relegated to damsel in distress rather than the main villain of the piece. Giancarlo Esposito manages to do the best with Ra’s Al Ghul given the limited amount of screen time he has in the film. His Ra’s is equal parts regal and merciless and from the little interaction we seen between Damian and him we see an amazing amount of pride and love he has for his grandson. Deathstroke on the other hand is a mixed bag at some points being very stale and single minded and at others being more like the Deathstroke we are accustomed to. One of the best qualities of Deathstroke is that he seemingly has an inferiority complex to both Batman and Damian. Deathstroke believes that he was destined to rule the league and that everything he seemingly deserves has been usurped by Damian and Batman. It is a fun amount of depth in an otherwise stale performance. Sadly Talia suffers the most in terms of exposure and overall use as she goes from a strong assassin to the Damsel in distress. One of the best parts of the original story is that Talia is the villain so Damian is forced to choose between the mother who raised him and the father he just met. Instead Talia does nothing in the later half of the film and willingly gives Damian to Bruce to train, it should have been Damian’s decision rather than someone making the decision for him.

Overall this was a very strong entry into the DCAU and a fantastic introduction for Damian.

-The lack of certain material in the book is apparent

-I feel like we were cheated out of that Nightwing v. Damian fight. Also Tim Drake’s presence was sorely missed.

-Ninja Man-Bat Assassins. Those are an actual thing that happened in the comic.

-My favorite moment was when Alfred told Damian he was too old to give a shit about sarcasm. Alfred’s dry English wit is the best