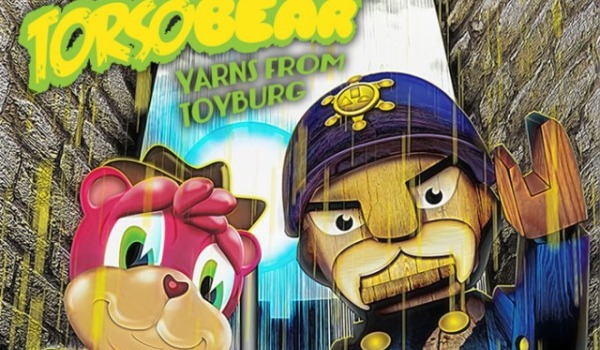 There are few comics out there as innocently decadent as this one.  In fact, I can’t think of the last time I read a story akin to Brett Uren’s “Torsobear” from Outre Press second anthology – Hopelessness.

“Torsobear” centres on Detective Ruxby Bear, a ‘happy bear’ by all accounts, who’s just graduated from Fischer-Pietro police college, yet is still unprepared for the gruesome underworld he finds himself thrown into. On reading the comic for the first time, it’s the subversion of all things innocent that hits you. Contrary to a previous sentence, there’s really nothing gory or gruesome at all in this story.

Instead, Uren succeeds in taking a stereotypical crime setting and placing it within the confines of a toytown – Toyburg – complete with lemonade rain, curved homes adorned with faces, and lollipop streetlights. The subversion really lays in taking the innocent and placing it with a darker mentality.

Ruxby Bear’s partner, the old, wooden policeman Hazbrow, is racist towards Ruxby (calling him a ‘fluffbag’), a Piñata vomits candy, and Ruxby himself becomes distraught at the sight of a decapitated teddy bear.

And once Ruxby lays eyes on this sight, things only get darker. The colours switch from bright and buoyant to grim and miserable, with a stronger sense of shade than before. However, the subversion of innocent imagery remains apparent. Characters keep in contact via cup-and-string telephones, while Ruxby himself lives in a gingerbread house.

The emotional resonance of this short piece hits a home run when in the final page and a half, Ruxby’s young son, Wellington, pleads with his father to know why Ruxby has such a twisted, disturbed expression on his face. Unable to tell Wellington the reason, Ruxby tucks his son into bed and regains some of his buoyancy; even the artwork regains some colour.

Then the cup-and-string telephone rings and the final panel becomes almost completely drained of colour and light, more so than anywhere else throughout the story. We don’t even see Ruxby’s face, having gone from a cheery, determined expression on answering the phone to an expression that we don’t even need to see to understand. The final panel shows him with his back to us, head slightly drooped, and Ruxby perhaps another step closer to understanding how this is no world for a bright, pink teddy bear with a son.

“Torsobear”, the first story featured in Hopelessness, is more than just a well-executed piece of parody pulp – its a marvellously constructed yet endearingly simple tale of subversion, and demonstrates just how strong a story can be when combining the innocent with the deadly.

Download the comic here for free from Outre Press, and support the upcoming full-length graphic novel via its Kickstarter campaign!