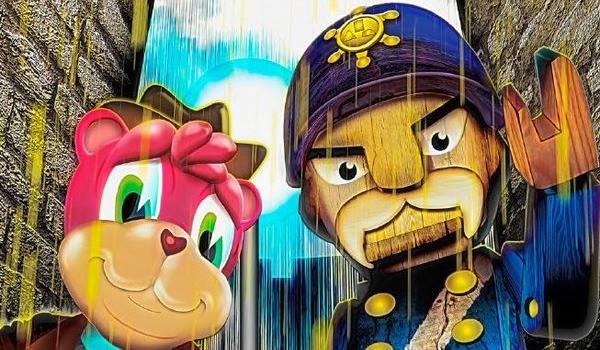 Some months ago, we reviewed a short comic set in a toy-noir world filled with lemonade rain, a racist wooden toy policeman, and decapitated teddy bears. Now that comic, Torsobear, has manifested into a twelve-story anthology entitled Torsobear: Yarns from Toyburg.

Don’t be fooled by all the bright, gorgeous colouring – the residents of Toyburg constantly face a grim reality that’s mixed with some lovingly placed pop culture references. Transforming robots are at war with each other on the street, wooden coppers beat up a lonely bear and his marmite for loitering after arriving from another country, and knock-off Empire leaders are given a hard time for not being pure.

Each story can be taken individually, yet they all form a loose story-arc that builds up to a riveting conclusion, all told with the straightest of faces. The stories themselves are full of deftly-timed puns at the expense of the downtrodden characters, made all the more hilarious through the artwork, itself filled with so many references to toys far and wide its bound to send you scavenging your nearest Toys’R’Us.

Every individual story fills in gaps in the various areas of Toyburg, adding a grand sense of scope when the story-arc does at last reach its end, and the near-constant change in artwork does little to slow down the taught, brooding pace of the novel as a whole. The majority of the story revolves around Detective Ruxy Bear, who’s recently been transferred to Toyburg to solve a strong of horrid bear-related decapitations. Throughout, Ruxby, his friends, his colleagues, his suspects, his witnesses and his family suffer the full force of what a corrupted city like Toyburg can bring, with startlingly human results.

Torsobear: Yarns from Toyburg takes the original short story of Torsobear (itself included here as the first chapter) and expands on the many elements the original short merely hinted at. The end result is, on first glance, a combination of noir-homage and toy culture, but Brett and his team choose the perfect figure for each story, and each story is exquisite in its tale and construction, ranging from snapshot city-life to hard-boiled thriller mystery, all told with the tongue so firmly in cheek the face never looses it straightness, with much of the humour derived from the visuals.

Torsobear: Yarns from Toyburg is a graphic novel that epitomises the medium, offering the reader both a conventional expectation in that it delivers the visual punch only a graphic novel can deliver, and challenging the reader as to how far the fusion of adult themes with a child-friendly setup can be accepted. Ain’t for the faint of fluff indeed.

You can buy or download your copy of Torsobear: Yarns from Toyberg here or here!