Home » The Recent Evolution of The Superhero Genre 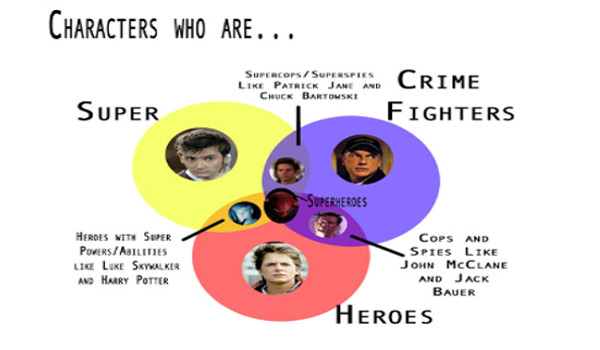 Four years ago, I created A Place To Hang Your Cape in part because I wanted to try to define the superhero genre. At the time, I thought I had a good set of criteria that fit every superhero film. And at the time, the definition worked.

But oh how times have changed.

Since 2010, there have been almost 20 major superhero films released, and my definition for the genre quickly got tossed out the window. Between films like Thor, The Lone Ranger, and Guardians of the Galaxy, does my definition even still apply?

My original criteria for superhero films basically boiled down to these essential qualities (discussed best here, here and here):

–         The Hero must have some kind of secret identity, or at the very least does not fight crime using the same identity he uses in everyday life. This generally means the Hero should have some kind of costume and it’s not the Hero’s normal job to fight crime (like a cop, soldier, or spy)

–         The Hero must have special abilities. These can be powers (like Superman or Spider-Man), skills (like Batman), or technology (like Iron Man). The abilities must also be unique to the Hero (for instance, Harry Potter’s magical powers are not unique in his world)

–         The Hero must fight an unending war on crime/evil. This is a rather important element: the Hero must not be fighting against a single enemy whose defeat would negate him being a hero.

–        The characters must have some ties to reality; it’s not set in a fantasy world, like Harry Potter or The Hobbit, or a sci-fi world, like Star Wars.

When I first came up with these parameters in 2010, I was able to get every superhero film pre-2010 to fit into the box, with only minimal squishing and squashing. But then 2011 rolled around, and released five Superhero films that each messed up my rules for the genre.

First up was Thor. Thor has no secret identity; a few jokes aside, he’s always Thor. Still, he has a costume, and the fact that he has a cape helps. Ok, so that’s something, but as a prince/soldier of Asgard, it is kind of his job to protect people. And while his specific abilities are unique to him, all Asgardians have some kind of superpowers. And his ties to the real world are tenuous at best, and really, the film fits much better in the Fantasy genre.

Then there was Marvel’s other entry, Captain America: The First Avenger, which owes more to the War Film genre than Superhero. Once more, it’s the Hero’s job to fight, and his costume is more of a uniform. The film also hit many more of the classic War Film tropes, which I discussed in depth in my review.

After that came X-Men: First Class, which was a right clusterf**k character-wise. Depending on how you read the film, either Xavier or Magneto could be called the Hero. This is really the first Superhero film where it is completely unclear who the main Hero is (hint: in every other X-Men film, it’s been Wolverine). What’s more, there’s an argument that Magneto is a Villain! How can a character be both a Hero and a Villain?!?!? On top of that, the best character to call the Damsel is Mystique, but she barely fits any of the criteria: giving the Hero something to fight for, keeping him grounded, being put in danger in the climax – she doesn’t really do any of it! The best you can say is that the two characters who could be the Hero both care about her. Yeah. Complicated.

At least there were some straightforward Superhero films in 2011: Green Hornet and Green Lantern. Both followed the rules pretty much to the letter. Especially Green Lantern. Really. Literally. EVERY RULE! No other film since Spider-Man has been that on point. And both were also pretty terrible, in no small part because they were so formulaic.  But that just makes things worse: why is it that of these five Superhero films, the two that were universally disliked are the ones that best fit the genre? What was going on?

Let’s move forward. 2012 was another banner year for Superhero films: The Avengers, The Amazing Spider-Man, and The Dark Knight Rises were all released. Luckily, TASM and TDKR managed to stay within the bounds of the rules I had laid out, which was a relief after the previous year. But once again, Marvel decided to break all the rules.

Despite being far from the first group Supehero film (Fantastic 4, Batman & Robin, Mystery Men) The Avengers was the first where no one hero really stood out above the rest (for those of you shouting at me now, in Fantastic 4, Reed Richards is the Hero, Sue Storm is the Damsel, and Ben and Johnny are the Secondary Heroes. Trust me, it works). In The Avengers, none of the four main heroes really stands out from the rest. And that’s good, it works in the film’s favour. But that means the only way to make the film fit is for the whole team to be considered as The Hero. Okay, I can live with that. Loki is still the villain, Fury could be seen as the Mentor, Coulson could be the Confidante, and one could even argue that Hawkeye and Black Widow are Secondary Heroes when compared to the main four. But then the Damsel is… New York City? Maybe that waitress? There really isn’t a good one!

The films of 2013, Iron Man 3, Man of Steel, The Wolverine, Kick-Ass 2, and Thor: The Dark World were more or less all within the rules of the genre. Or rather, none strayed as much as the 2011 films, and really they were pretty similar to the pre-2010 films. Thor still had the same problems as before, but those have already been addressed.

But wait, there was one more Superhero film that year: The Lone Ranger. The first Western-Superhero film, which borrowed fairly equally from both genres, and actually doesn’t really break any rules in either. I mean, you’ve literally got white hats and black hats and gun duels, but you’ve also got a Hero with a secret identity and abilities who fights crime… It fits better than the War-Superhero mash-up that was Captain America: The First Avenger.

Which brings us to 2014. Captain America: The Winter Soldier, X-Men: Days of Future Past, The Amazing Spider-Man 2, and Guardians of the Galaxy. Where to begin?

The Winter Soldier and Days of Future Past each suffered from the same issues as their predecessors. For The Winter Soldier, just reread what I wrote about The First Avenger, but substitute “spy thriller” for “war film”. Hell, the plot could have been a discarded James Bond script. And while DOFP did bring us back our X-Hero Wolverine, Magneto and Xavier both become his Secondary Heroes up until Magneto’s unsurprising face-hell-turn. But then, I’m just talking about the “past” versions of these characters; the “future” ones just present a whole new kind of dilemma. And let’s not forget the noticeable absence of a true Damsel in both films once more. Well, actually, Beast fits the mold best for DOFP, but I’ll discuss all these Damsel issues in a later article.

TASM2 was bog standard and the less said about it the better.

Which brings us to the smash-hit Guardians of the Galaxy. The film not only shattered everyone’s expectations at the box office, but also my definition of Superhero films. See, I purposefully wrote the rules to exclude specific franchises, like Star Wars and Star Trek. So, now I must either admit that either Marvel has released a film that does not actually fit into the Superhero genre or allow GOTG into Superhero the genre, and in doing so open the door to the Stars. Aside from the tone, GOTG has more in common with those two franchises than Iron Man or Thor. The Guardians aren’t really superheroes; they’re space heroes really. Right?

Let’s see if we can do something about this. One could argue that with Star-Lord as the Hero (he does give himself a codename and a mask afterall, both things that Luke Skywalker and Captain Kirk don’t do), then Gamora is kind of the Damsel (well, as much as Mystique ever was), and that the other three are Secondary Heroes… I mean, it works. Ish. Afterall, Luke is fighting a singular war that ends, and the crew of the Enterprise are explorers, not crime fighters. It is made clear that the Guardians will continue on in their role as, well, Guardians. So I guess, yeah, it is a Superhero film. Kinda. But it’s still ruined my definition!

I guess what I’m really trying to say here is that the Superhero genre, like Film Noir and the Western before it, is becoming very complex and has crossed into virtually every genre out there. I mean, think about it…

Space Opera: Guardians of the Galaxy

Bollywood: There are dozens.

Honestly, I think the only genre missing from that list is Musical! Rather surprising considering it’s a genre full of men wearing tights… Guess we’ll have to wait for the film adaptation of Spider-Man: Turn Off the Dark. Who knows, it could be better than TASM2…

I still stand by my original definition of the genre. No genre is made up of films that all follow every rule every time. I suppose what I’m really saying is that more than any other genre, Superhero films have crossed the boundaries into other genres in ways no one expected, and hopefully will continue to do so for years to come.

What do you think of the current state of the Superhero Genre? Is my definition too strict, too loose, or just right? Did I miss out films that you think should be considered part of the genre, or include any that should be left out? Sound off in the comments below or send us your thoughts on Twitter!