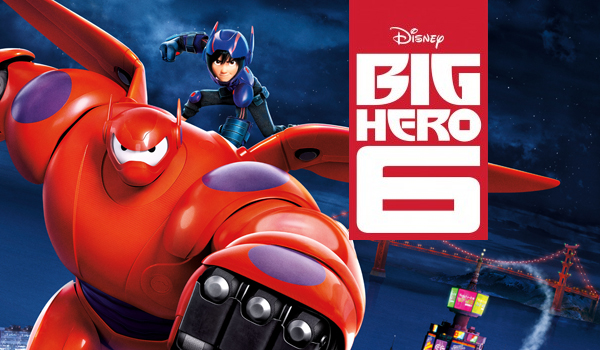 How many Japanese super-powered characters from the Marvel Universe can you name? Let’s just say half of Psylocke doesn’t count so that leaves me with Sunfire and Silver Samurai. Consequently, they were both former members of the obscure all-Japanese team of Big Hero 6. Filling out the roster were bottom-tier characters making their first (and often last) appearances as part of this team. This obscurity granted Disney’s Animation Studio freedom to liberally adapt the title into a palatable family-friendly adventure that’s fun to watch, but previously trodden territory for comic and movie fans.

The story follows child-genius Hiro Hamada who suffers a personal loss but is left with a family healthcare robot named Baymax who is determined to heal Hiro’s emotional pain. In the process, they discover a supervillain and become superheroes in response. Recruiting his older genius college classmates, Go Go, Wasabi, Honey Lemon, and Fred, he forms a team of six technology-empowered heroes to take down the bad guy.

There’s some fine bit of animated acting with humorous quirks that only adults will notice, fast slapstick for the kids, and awkward moments that are adorable enough for both crowds to enjoy. The voice acting is certainly reasonable but par for the course, as opposed to Kristen Bell‘s surprising turn in Disney’s previous outing, Frozen. The art was a fantastic imagining of a San Francisco/Tokyo hybrid city, and while most of the characters have that similar Disney shape to them, it’s good to see John Romita Jr.‘s signature chins show up on a face or two. The comedy is harmless enough, but the jokes at best made me smile, and I rarely heard a room-shaking guffaw even from the children in the audience. For the audiences new to genre movies, the story will be pretty satisfying, but for me and the folks who visit this site most often, familiar and predictable.

Purists, if there are any of such an obscure title, will cry foul over the plethora of the Disney changes, but I found the alterations reasonable and often wiser for a modern audience. First, out of the five humans on the team, they dropped from being 100% Asian to 40% opting for a more racially sensitive diversity rainbow team, a move I support as an Asian since an entirely Asian team in modern times would seem ironically insensitive and more segregatingly bigoted than it did when Big Hero 6 was first conceived over 15 years ago. Explaining why the African-American was named Wasabi in a single line of passing dialogue was an impressive feat. 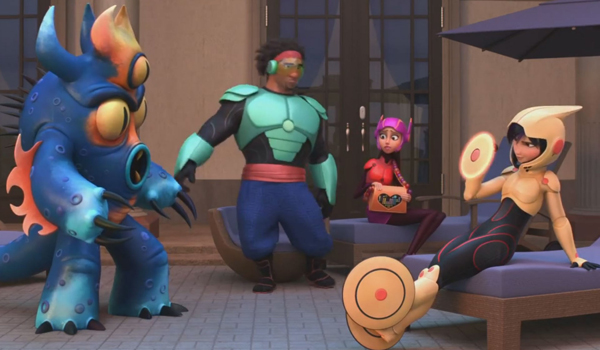 Secondly, all the superpowers were granted through technology, like six Iron Man suits, which when you consider the difference of movie Fred wearing a fire-breathing suit versus comic-book Fred who could physically turn into a fire-breathing kaiju at will, that was probably the smart, human play. Honey Lemon’s “Power Purse” was also cleverly adapted into something plausible from something utterly ridiculous. Also, Baymax, who originally could shape-shift from dragon to battle mech to stern old man, is much more appealing as a childlike, giant cuddly pillow and now qualifies as a classic Disney mascot and merchandise generator.

Third, taking them out of the real world and inserting them into the fictional San Fransokyo may seem like a cop-out, but it certainly liberates Disney to explore a world without stepping on the toes of the Avengers franchise while also avoiding the dilemma of explaining why everyone in Japan speaks perfect American English. However, renaming Hiro Takachiho to Hiro Hamada because it rolls of the tongue better, well that one I’ll leave up in the air.

All in all, Big Hero 6 is a slightly above-average movie, but almost cliché nowadays, especially in a post-superhero-aware world where The Incredibles in 2004 already broke ground two steps beyond what Big Hero 6 is offering in 2014. Hiro flying on Baymax for the first time is pretty much a reenactment of Hiccup and Toothless’s first flight from How to Train Your Dragon. However, in true Marvel movie fashion, you must stay for the stinger past the credits. That one moment filled me with such pleasant surprise, my laugh was louder than during any other part of the movie, and it persisted the entire drive home.

How do you think Disney handled their first big-screen animated Marvel movie? Do you think there’s another franchise here? Was this the best stinger of the recent underwhelming Marvel stingers?  Sound off in the comments or send us your thoughts on Twitter!