Home » REVIEW: Constantine 1×02 “The Darkness Beneath” 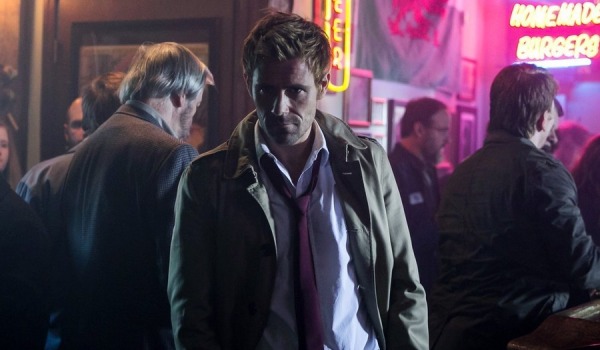 So I waited an entire week…to watch this?

Lucy Griffiths’ Liv Aberdine is not present in The Darkness Beneath. She has been replaced by Angélica Celaya’s Zed Martin. Why? Liv’s choice to not work with John made it seem as if he would be working (mostly) alone, and yet Zed was introduced this week. Technically she had a short scene at the end of the first episode but never mind that. My main complaint (and opinion) is that Angélica can’t act her way out of a paper bag, which is only made worse when compared to Matt Ryan’s acting as John. Since they share plenty of scenes together this comparison must be made often. When John said that he “works best alone” I thought “or at least with someone that can act.” I wanted to like this show, I really did, but how am I supposed to be drawn into the world of magic and demons if an actor is unable to show basic human emotions? I was too distracted by her performance that I lost track of what was going on in several of the scenes, which is never a good thing.

In this episode John travels to Pennsylvania in order to protect a mining community against the supernatural. During his investigation he is confronted by a young woman, Zed Martin, who states that she sees him in her dreams.

Once again the special effects were well done, especially for a TV show, though this time the story was lacking. I was worried that a lot of effort was put into the pilot in order to draw an audience to stick with the show as an excuse to put less effort into the second episode. I didn’t care about most of the side characters in this episode, and the stakes were not high enough. I never felt that John was in any real danger, which takes away any tension that the scenes would have had.

I have not read any of the Constantine comics, and that will not change anytime soon since George R. R. Martin’s “The World of Ice and Fire” just arrived at my doorstep, but I was told that Zed is a recurring character. To any of you that have read the comics I just have to ask how you feel about the casting of this character? Is she incredibly important to the story? This episode sets up their relationship to seem that it will eventually turn romantic, which is the last thing that I want to see in this series. If he is truly on his mission to save that little girl then he should not get distracted by a silly romance.

The villain in this episode is too easy to predict and is taken down too easily. The tension that was in the pilot is nowhere to be found in this episode and it can be blamed on two things: poor choices in storytelling and an even worse choice in Zed.

I want to give it a lesser grade, which it deserves, but I like Ryan’s Constantine too much to give it anything lower.

– Lack of tension in some scenes

– Zed Martin. I realize that much of this review has been complaining about this character, but that was a major issue for me. I hope that other viewers did not feel the same way.