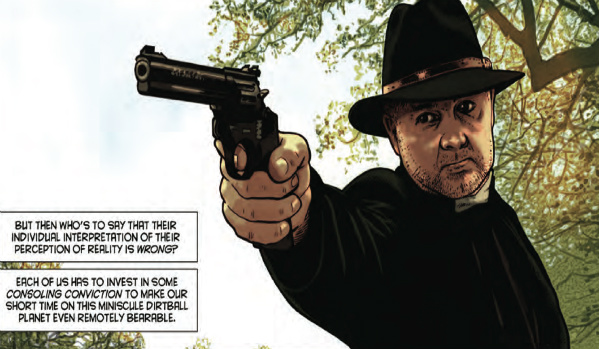 Gary Spencer Millidge’s surreal series Strangehaven was first published in 1995 and since then has seen the occasional new release. The latest entry, appearing in the anthology Meanwhile… may be somewhat hard for newcomers to the series to understand, but still offers a fresh take on how eccentric the independent comic industry can be at times.

Each story offers something new and fresh, with some of them, such as the story of how a bag of frozen peas was voted into power, being played primarily for laughs and only taking up a single page, while others offer more complex situations.

The first story, Strangehaven Destiny, is one of the strongest, as a seemingly good natured priest struggles with how the residents of his small English village begin to fall into despair and desperation. But you know it’s hard to remain sane yourself when everyone around you goes crazy…

Turns out there’s a crazy Ku Klux Klan style cult trying to take over the village, the leader of which, named Megaron, “reconciles his own tribal beliefs with a rural British outlook”, like telling a member of his cult that he plays cricket with a straight bat after he refuses to spend the night with a prostitute. Megaron wants said cult member named Charles to become a high ranking official, but the cult member has a more Groucho Marx “I wouldn’t want to be a part of any group that would accept me” outlook.

Charles is told to get his shit together as he frequently misses the cult’s meetings and does not seem to be interested. He seems to want to leave the village, but only those who the village chooses can leave…

Halfway into this story we cut to 10 Minutes, written by the brilliantly named Yuko Rabbit, is more of a fairy tale about a world where gravity works backwards. For the residents of a tower to ensure that they do not ‘fall’ towards the sky, they keep a girl with the ability to keep gravity under control locked up. Too bad the new guard let’s her loose. This story has an interesting premise somewhat let down by bland, confusing artwork, and the choice to go black and white does not really work with the fantastical feel that they were going for.

We then cut to…Well, that’s another issue with this anthology. Some of the stories cut off abruptly to make room for the next, and although ‘to be continued’ is something that comic book fans are accustomed to, in an anthology it becomes more of a hinderance than a temptation to find out what happens next.

The Bad Bad Place is probably the most original story in the volume, in which a strand mansion appears out of nowhere in the middle of a sleepy town, with only the eccentric old fool having any idea of what’s really going on. We’ve all been in the situation where we know the solution to a problem and get frustrated when people won’t listen to us because they feel that our views are not valid so this is certainly something that everyone can relate to.

Communication Breakdown is a relatively generic but fun sci-fi with all the genres cliches, including ninjas, thrown in for good measure.

The final story, Heavy, features no dialogue and instead relies on visuals to tell the story, which is presumably about a woman who is fed up with her depressing mundane life and wishes that she could fly like a bird or something.

Granted some of the stuff on offer here may be a little too bizarre for its own good but as an independent series that defies all mainstream conventions and instead offers its own unique brand of weirdness, Strangehaven is one of the strongest titles on offer. 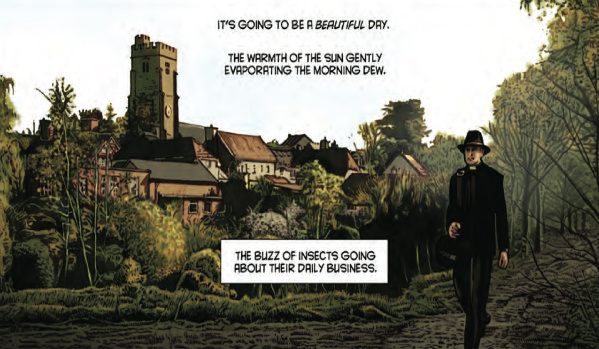 Have you read Strangehaven or Meanwhile…? What did you make of the anthology? Let us know in the comments section below or send us a tweet!