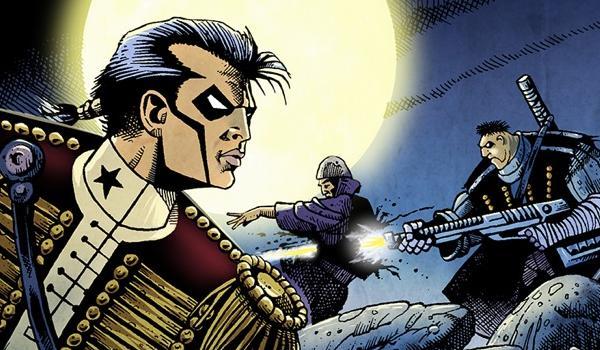 Since the beginning of 2014, this bi-monthly anthology from Biomekazoik Digital Comics has been delivering some excellent work. You can have a look here at our reviews of their earlier volumes. Cracking swiftly on, I’ve been asked to take a good look at these two volumes and I’m very happy to report that the exercise did not prove to be a chore. Far from it.

Volume 6 kicks into gear with a 6pp, full-colour short, Backtrack, from David Hailwood and Tony Suleri (Slumdroid, Bulletproof). The other-worldniness that’s rendered by every stroke of Suleri‘s work is really quite something. Whilst there’s a strong narrative to this finely twisted manhunt, the artwork elevates this piece into something memorable. A fine opener.

Hailwood strikes a rich, deep vein in this book. Dead Beats is a definite highlight. It’s a triumphantly risible tale that revolves around the banter between a bunch of zombies, down the pub. The dialogue is pitch perfect. With just a few short sentences, character’s voices ring hilariously true and thanks to some sublimely detailed line-work from Neil Alexander, not a trick to maximise the fun in each panel, is missed. The world needs more Cockney Zombies!

To whet one’s appetite even further, there’s Poor Taste. This is my personal favourite. This tale is staged in Chun Lo’s House of Edible Exotica. It dizzyingly satirises the concept of a middle-aged couple, wanting to try something fancy. To be honest, one half is unwillingly dragged along by the other. The best moments however are reserved for what occurs in this establishment’s kitchen. The ingredients for their menu are extreme and so, appropriately, are the methods of preparation. Yet again, thanks to Hailwood, the characterisation of the kitchen staff really shines. The black and white art from Neill Cameron and Mark Stafford is prepared with gusto. The sincere joy in the visualisation of scenes of blood-curdling, culinary chaos is palpable. Black pudding, anyone? 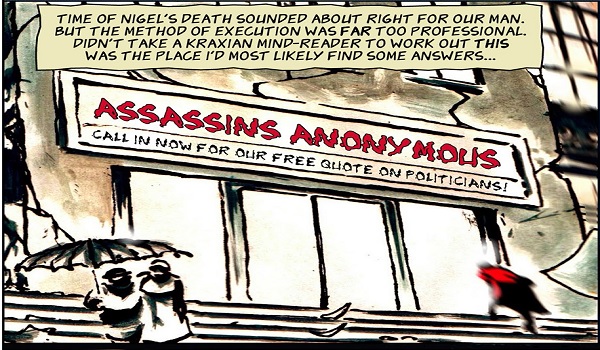 100% Biodegradable #7 features the launch of a fresh serialisation, Death Duty, from John Freeman (Dr Who Magazine, Judge Dredd Megazine, Crucible Comic) and Alan Burrows (2000ad, Starblazer, Commando), with letters by Ken Reynolds. We’re introduced to the crew of the warship, ‘Kill Me Softly’, hired hands that launch a raid on a peaceful planet. The motive is business and Freeman‘s dialogue reinforces the cold, unsentimental logic of this cruel universe and the people within it. Burrows‘ textured visuals, illustrate the violent extremes of these space-pirates with appropriate abundance. The mystery behind the central character, Rourke, is likely to have you hungry for the next instalment.

A Date With Death, a 3pp short from Hailwood and Suleri, brings to reader to Chunder City. This is not a nice or safe place, although it’s lovingly illustrated, utilising colourways that I can only refer to as pukey pastels! The fine writing immediately establishes the reader in the moment, bearing witness as bounty hunter Pubba Gintaro, take on a plethora of monsters. The online-dating banter between these adversaries is sincerely entertaining.

I was particularly impressed by Happier Times from Chris Redfern (Futurequake, Zarjaz, Hallowscream) and J.T. Pegg (2000ad, Judge Dredd Megazine, Psychedelic Journal Of Time Travel). The artwork is dynamic and packed with vivid moments of action, hope and despair, in a tale that has a very fine, bittersweet twist. 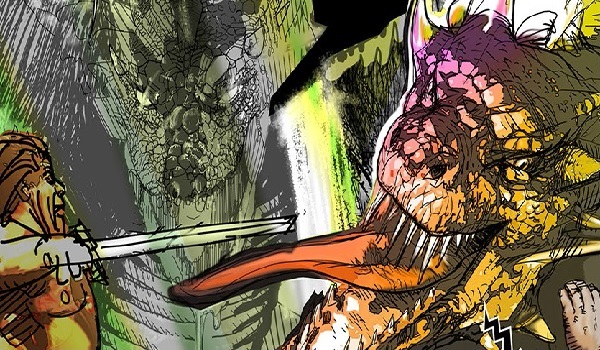 Jimmy Furlong (Something Wicked, Spod! Oddities From Space) and Andrew Hartmann (Futurequake, Seqapunch Quarterly), present a noteworthy piece, Gremian, the Machine Elf . It’s a tale where most of the characters regard interstellar travel as unremarkable, mundane. The universe however is vast and full of mysteries, dangers and infinite possibilities. Furlong and Hartmann skillfully employ a dual narrative device, delivering distinctly opposing points of view. The artwork is rich with detail, fantastic character design and charges the storytelling with visceral energy. This fine work is complemented by stunning colouring from Norman Johanns and the final result is a cut above.

Having addressed some of the highlights, there are of course other good works in each of these volumes; a vicious play on the power of literature, an uproarious parody of the Beowulf legend and Stewart Moore‘s Aufklärung, a heady single page, spring to mind. The important point to bear in mind is that this series of anthologies is certainly growing from strength to strength. 100% Biodegradable is delivering diverse, exuberant storytelling and I look forward to further volumes in the New Year.

Issue 7 of 100% Biodegradable has just launched on Comicsy and Drivethru and Issue 6 is due out on ComiXology, right now.