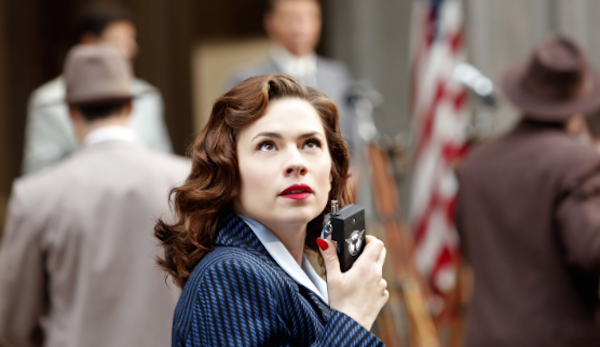 Well, that was an underwhelming finale.

Months ago, I had high hopes for Agent Carter because I thought it was an interesting premise with a strong central character. The show started off with a bang and kept my interest at the beginning of its eight-episode arc, but I have to say that tonight’s finale was lacking. (spoilers ahead!)

I partially blame myself for getting so hyped up over tonight’s episode. I figured that there would be a huge reveal that intertwined with the Marvel Cinematic Universe, and to be fair, there was an after-credits scene that tied into the future of the MCU. However, it just seemed like something bigger would happen; maybe a cameo by Hank Pym, or even another appearance by the Howling Commandos.

Howard Stark is back in town after finding out about item 17’s effects on the theater. Fun fact: item 17 has no major significance in the MCU. It was just an army experiment that went wrong and became a biological weapon. They couldn’t have at least found a way to tie it into Agents of S.H.I.E.L.D.? A missed opportunity if I ever saw one.

The SSR, Carter, and Stark come up with a plan to lure Doctor Ivchenko and Dottie Underwood into a trap, but things go awry when the dastardly duo trick the heroes and take off with Stark as their prisoner. Around this time, it’s confirmed that Doctor Ivchenko’s real identity is Johann Fennhoff, aka Doctor Faustus. This was one part of the show that I actually enjoyed because of its ties to the MCU. Also, as I mentioned in last week’s episode review, Faustus could possibly play a huge role during Captain America: Civil War. So at least the finale had that going for it…

Faustus hypnotizes Stark into dispensing item 17 in Times Square via airplane. Carter and the SSR agents head to the air-hangar to apprehend Faustus and Dottie while Jarvis takes another plane and flies after Stark to stop him.

Carter and Dottie get into a brief yet entertaining fight scene. Carter holds her own in the fight (even after Dottie starts beating her with a baseball bat), and then defeats the assassin with a solid kick through a window. We think Dottie is dead when we see her body lying in a small pool of blood, but in the next scene, she’s gone.

Where the hell is Dottie? When are they going to reveal her fate? Knowing Marvel, you’d think we would’ve had an after-credit scene showing Dottie wearing a new disguise and making a place for herself in a different city; possibly taking care of a baby named Natasha.

Also, and I may have just missed something, but how could they not have thrown the name “Black Widow” out there? No mention of the title at all, yet it’s plastered all over the Internet. It’s glaringly obvious that Dottie was one of the first Black Widows, so why couldn’t they just say it? Marvel has a bad habit with this. Don’t get me started on the fact that Hawkeye’s name or presence isn’t even mentioned once throughout Captain America: The Winter Soldier for God-knows-what reason. Why couldn’t they utter two words? Black Widow. This kind of stuff makes me feel like I have an itch I can’t scratch, and it’s incredibly frustrating.

Of course, I can’t end this review without talking about the very last scene. Faustus has his mouth sealed shut as he’s placed in a dark cell. But he’s not alone. Out of the shadows comes our good old friend, Arnim Zola. While it was fun seeing his familiar face, I had to wonder, “why the hell would you put these two together in the same cell?!” Just because Faustus can’t talk doesn’t mean he isn’t dangerous! And Zola was the Red Skull’s right-hand-man! These two are a horrible mixture ready to explode! Why is the SSR so sloppy? They’re dropping the ball already.

The ending ties up the loose ends for the most part, except for the question as to who Carter ends up marrying. I know it’s not a huge deal, but after Marvel told us that they’d reveal her husband, I was kinda looking forward to this big reveal. Oh well – at least Carter gave us a solid performance throughout the whole episode.

+ The fight scene between Carter and Dottie was fun to watch (even if the odds were questionable).

+ At least there’s a possibility of a second season.

– For a finale, it was a bit underwhelming.

– We were told that we’d find out about Agent Carter’s husband, but by the end of the episode, we’re still clueless (although it’s slightly hinted at being Agent Sousa).

What did you think of the finale? Was it satisfying or should there have been more? Let us know what you think in the comments or on Twitter!