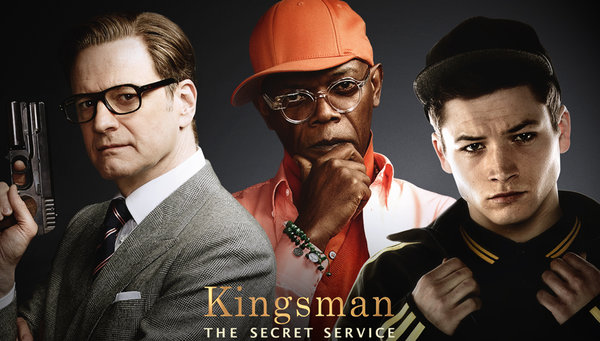 There’s a scene toward the middle of Kingsman: The Secret Service where a drugged/chipped-up Colin Firth is forced against his will to massacre a Westboro Baptist Church-type group of religious Americans set to the roaring shreds of the guitar solo from Lynyrd Skynyrd‘s ‘Free Bird’. He bludgeons, shoots, impales, stabs and beats just about everyone in there to a bloody pulp.

That may sound highly entertaining (and trust me, it was), but does Matthew Vaughn‘s adaptation of Mark Miller‘s espionage comic offer more?

Kingsman: The Secret Service centres on plucky chav Eggsy being recruited into a world of underground espionage. On joining the titular organisation Kingsman, he becomes embroiled in the affairs of the quirky villain Valentine, who intends to create a new world via implanting deadly SIM cards into 99% of humanity and cleansing the planet.

What sounds like an enjoyable romp translates into such, and it’s obvious how much fun Vaughn is having taking the micky out of countless classic spy films from Bond to Bourne to Bauer and back again. Unfortunately for Kingsman: The Secret Service, the shadow of the elusive movie adaptation of Kick-Ass 3 looms very heavily over it. Vaughn carries his manic, foul-mouthed, young hero-centred themes from vigilantes to secret agents well, but Kingsman: The Secret Service does itself a disservice by offering itself as Kick-Ass‘ stuffy British cousin.

Kingsman: The Secret Service still has its charms. The acting is splendidly applaudable, with Firth, Taron Egerton (Eggsy) and Samuel L. Jackson (Valentine) turning in solid, dependable performances, although those who know and love Jackson as the Zordon of the Marvel Cinematic Universe may not be able to swallow his character’s lisp as easily as others.

Its plot, not entirely faithful to its source material apparently, feels very well-tread and ultimately fails to offer anything new to audiences. But its audience is perhaps those who aren’t quite old enough yet to have rooted through their parents’ DVD collection and discovered the great many spy flicks that Kingsman: The Secret Service references with violent abandon.

In that sense, Kingsman: The Secret Service is utterly harmeless and a joy to behold, but coming after Kick-Ass and Miller’s other big-screen comic adaptation Wanted, Kingsman, with its familiar plot and comical violence taken from Miller’s previous adventures at the cinema, feels like a slight let down. We’ve seen all this subversion before in other films, and Kingsman doesn’t have quite enough drive to make it stand out from Kick-Ass or Wanted. A blast for sure, but a blast that can easily be seen elsewhere.

Kingsman: The Secret Service is out in theatres in the UK now and gets its USA release on the 13th of February. Why not let us know your thoughts on the film either in the comments section below or send us your thoughts on Twitter!