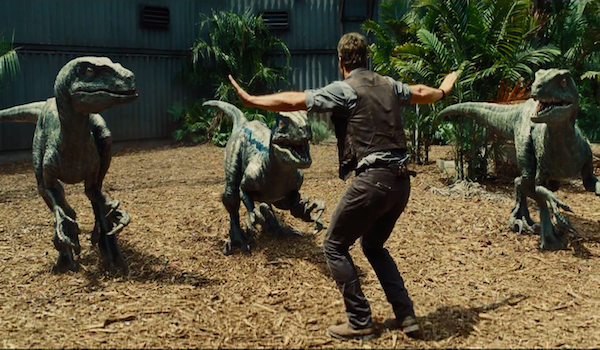 I’ll be blunt: I liked all of the Jurassic Park films, including the third one. I’m really, really happy that we have another installment coming our way, and after checking out the trailer, I can safely say that Jurassic World is going to kick ass. If you haven’t glimpsed the latest trailer, you can check it out below.

What’s there not to like about this film? Anything that involves Chris Pratt riding a motorcycle alongside a herd of Velociraptors can’t possibly be bad, can it?

In all seriousness, I have very high hopes for Jurassic World. This new installment takes place long after the events of the original trilogy, and it appears that the dinosaur-themed park has been re-opened to the public, now featuring more dinosaurs and a new name, Jurassic World (so THAT’S where they got the film title from!). The park directors want to boost attendance so they create a brand new hybrid dinosaur that is meant to be more ferocious than the T-Rex. Seems like a good idea, right? Because messing with dinosaur DNA can’t possibly go wrong at all, right?

Predictably, the new dinosaur kills her sibling and goes on a rampage through the park. But what makes her such a terrifying and ferocious beast is the fact that she is smarter than the average dinosaur. Not only does she cleverly claw the tracking device out of her skin, but she also knows how to communicate with others, and essentially becomes the alpha beast of the park. Taking her vicious nature even further, the park officials discover how their new creation has been hunting other dinosaurs for pure sport. There’s one shot in the trailer where we see the corpses of once-peaceful dinosaurs scattered across the landscape. It’s pretty chilling, but it’s an excellent way to set up the tone of the film and shed some light on the new hybrid dinosaur’s habits. 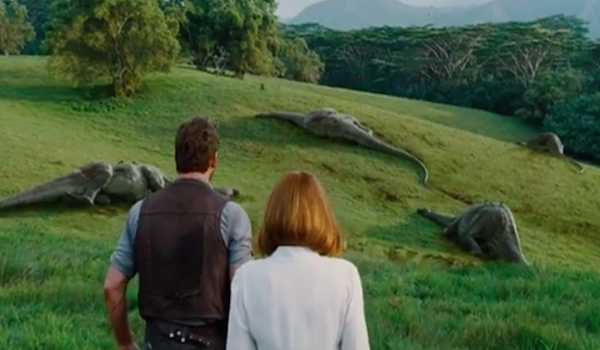 Chris Pratt plays himself as a park ranger and velociraptor-wrangler. We catch some spots of his trademark humor mixed in with serious moments, so I think it’s safe to say he’s going on auto-pilot for this film. Bryce Dallas Howard plays a scientist who seems to be partially responsible for the creation of the hybrid dinosaur, and a potential love interest for Pratt’s character, because Hollywood. Honestly, I could care less about most of the human characters; I really just want to see dinosaurs going crazy and attacking each other. We don’t get a clear, open shot of the hybrid dino in the trailer, though some pictures online reveal that she’s essentially a much bigger T-Rex with longer arms. Where’s your God now?!

Aside from the slain dinosaur landscape scene, my other favorite part of the trailer is when Pratt announces that they’re going to hunt down the beast his way, meaning that he’s going to ride into battle with his trust Velociraptor pets at his side. This scene alone makes the whole trailer worth it. In addition to this, it looks like we’ll be seeing a lot more of the dinosaurs and humans working together to take down the hybrid. I wouldn’t be surprised if the climactic fight scene featured the T-Rex and Spinosaurus from the earlier films coming to the rescue and taking out the new predator. *Fingers crossed*

The CGI looks great so far, which is kind-of a big deal seeing as most people complained about how the dinosaurs looked in the first teaser. I thought they looked fine, but you know how some people just love to complain for the sake of complaining. I can tell Jurassic World is going to be an over-the-top film, and I’m totally okay with that. It’s a series about genetically-modified dinosaurs running rampant through a theme park. How can you make it a good movie WITHOUT it being over the top?

I find myself saying this a lot, but I’m hoping that the movie execs don’t let the success of this film get to their heads and force them to do something stupid like create a Jurassic Park Cinematic Universe. I think they should leave this film as the final piece. I honestly can’t picture what other direction they can take with the franchise. As long as they don’t reboot it, then I’ll be happy.

Are you excited for Jurassic World? What do you hope to see in the film? Let us know in the comments or on Twitter!