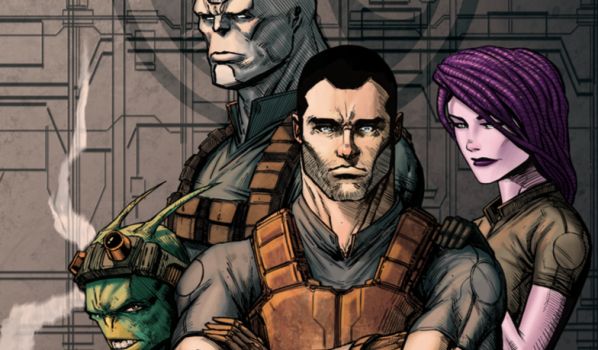 What do you get when you put a crew of eclectic archetypes – the leader, the joker, the thug, a bad-ass chick – on a suicide mission in deep space? The answer: at least three episodes of Firefly, not to mention Serenity; any number of cheesy late 90s sci-fi thrillers (Event Horizon, Mission to Mars); and, of course, THE Guardians of the Galaxy. There are many different ways to use the formula, however: it’s all about what you bring to the mix.

Robert Salley’s Salvagers certainly has plenty of familiar elements. The five-person team consists of the lantern-jawed Captain, one Bill Roenick; the pilot, lithe, purple-haired Tegan; the hulking, white-skinned Ty’r; and the cigar-smoking Brigby, a giant Jiminy Cricket with bad attitude. Their ship, a Harrier IV, resembles nothing so much as a miniature Star Destroyer, and, as the title suggests, they’re in the wreckage reclamation business. 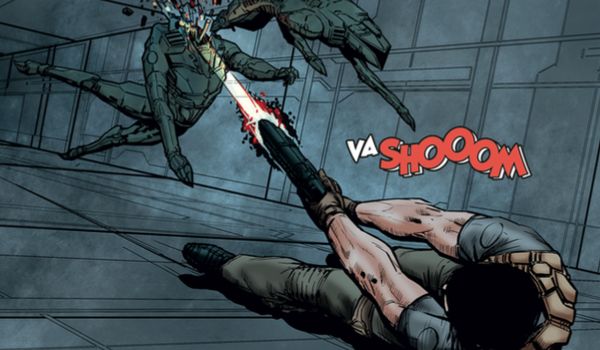 This may sound impressively pulpy – the opening panel is all paint-speckled darkness and giant cratered moon – the execution is lean and mean, if maybe a little flat. George Acevedo’s artwork is crisp and layered, subtly cross-hatched – the interiors are suitably Alien and the character models consistent. Delfine Siobhan-Kanashii’s colours, pastel, shades of blue and grey, imbue each page with a graded richness.

Despite these positives, though, Salvagers first three issues never quite escape from the genericness of its premise. For instance, Roenick’s past in the navy is alluded to and the simple touch of the trucker cap he wears suggests a different persona from the roguish opportunist model you might expect – more of a down-to-earth, John McClane everyman – but this notion is never fully developed beyond this initial impression. 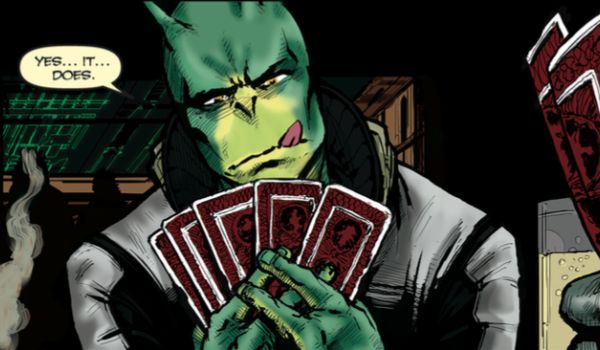 With a planet – Neruda III – characterized by Blade Runner-style neon, Mos Eisley aliens and Cylon-alike antagonists, Salvagers feels like less than the sum of its parts. There’s a scattering of vaguely obscure jargon – world-building phrases like “Darzinean Warspray”, “Graxons”, and “Arkaris” – that promises more than the “BRADDA BRADDA BRADDA” of automatic weapon fire (however entertaining), but the story is yet to pay them off.

What people take away from the best of these intergalactic man-on-a-mission-style adventures is not the narrative drive – an intergalactic crime boss here, a Macguffin-wielding tyrant there – but the brief moments away from the action; the tiny revelations of character the plot brings to light, the unique qualities of each team member that come about as a result. All Salvagers is looking for is one such touch of inspiration to truly bring it to life.

If you want to get involved in making sure the team of Harrier IV live to fight another day, you can do so here.