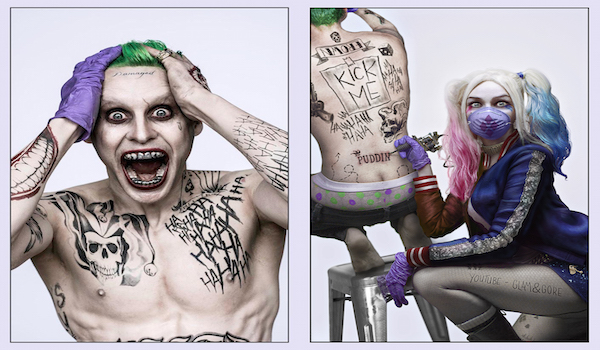 When we first caught a glimpse of Jared Leto’s Joker look for the upcoming Suicide Squad film, the Internet flew into a huge discussion over his tattoos. Some people hated them, others loved them; but a common question being asked was, “Where did the tattoos come from?” In the wake of this controversy, a new photo began circulating that showed a tattoo-gun-wielding Harley Quinn as the culprit. You’ve most likely seen this picture, and with that, you may have witnessed the flood of debates over its legitimacy. 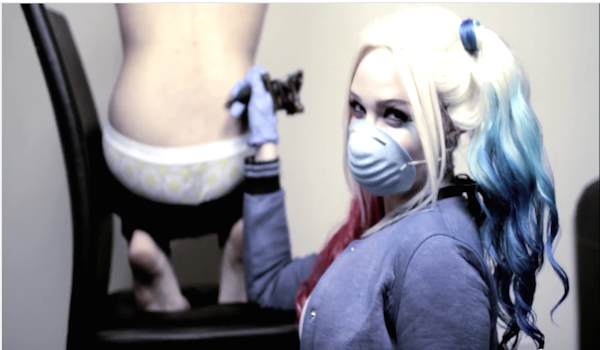 Well, unfortunately, it is not a real set photo. This picture came from special effects makeup artist Mykie of Glam&Gore, who did the makeup and posed as Harley Quinn, and visual effects artist and director Chase Langley, who was the photographer and editor. However, even if it isn’t a legit photo, it still doesn’t take away from the outstanding work and effort put into the project. Mykie was kind enough to speak with us about the experience.

A Place to Hang Your Cape: Why did you decide to take this picture?

Mykie: Chase and I had an idea following the release and controversy of the tattooed Jared Leto Joker to create a picture that explained where the tattoos came from. We thought it might be funny if Harley Quinn was responsible for them, so we were working on our own version of what the new Harley might look like, when the actual one was released by director David Ayer. When the actual one was released, we sprang into action so we could release our fan art soon after.

AP2HYC: How did you first find out about its popularity, and what was your initial reaction?

Mykie: It was quite literally an overnight thing where I went to bed on Wednesday night, and woke up on a Thursday morning to numerous articles circling the web. I couldn’t help but mostly just sit there and laugh in amazement that it was fooling some people. I didn’t really think it would because so many new pictures of Harley had been released in the days prior, and there wasn’t as much mystery to her anymore.

AP2HYC: Would you want to take another similar picture in the near future?

Mykie: Chase and I are always up for finding creative and new ways to use our areas of expertise in the visual arts – his being visual effects and mine being special effects makeup. If there’s another scenario that would be a good opportunity for fan art, then sure.

AP2HYC: What was the most difficult part to pull off (the makeup, the perspective of Joker’s back, the tattoo ideas, etc.)?

Mykie: It would have to be adapting to the release of new images. We shot this picture the night the group Suicide Squad photo had been released, so we were going off of very little information for her costume and makeup since we could only really see one side of her. Between the shoot and the time the edited photo was completed, we learned a lot of things we didn’t know- that her shorts are red and blue sequin, her jacket is half red, half blue, her necklace reads “Puddin”, she has a black heart on the right side of her face, what her leg tattoos are, her right pigtail is pink and not red, that she’s wearing fishnets and not sheer black tights, etc. Because of that, the real life costume I had scrambled to put together in a few hours didn’t resemble her actual costume as much as it needed to in order to be a well-done fan art. Luckily, Chase was great at adding in all the new information via editing, making the whole idea come together.

AP2HYC: Have you done any similar makeup work in the past that you used as part of your influence on this picture?

AP2HYC: What was the most enjoyable part of the experience?

Mykie: No doubt it was seeing the reaction of people before we could announce it was made by us. It’s very humbling to fool even a few people, and it’s very surreal to see real discussions happening about the direction of a character, all because of fan art we made.

AP2HYC: If you had the chance, would you want to actually work on the Suicide Squad set as a makeup artist?

AP2HYC: Are you a fan of DC films, and if not, since this picture has gone viral, are you definitely going to see Suicide Squad when it hits theaters?

Mykie: I’ve only recently gotten in the world of comics – thanks to Chase, actually, who has always been well-versed in that area. I’ve grown to really love Harley Quinn’s character and her dynamics with and without the Joker. We will definitely be seeing Suicide Squad when it’s released, and all other DC films.

If you’d like to learn more about the behind-the-scenes aspects of the photo, you can check out the Harley Quinn makeup tutorial on Mykie’s channel here. You can also find more special effects makeup videos and pictures on Mykie’s social media channels listed below.

What did you think about this picture? Let us know what you think in the comments or on Twitter!