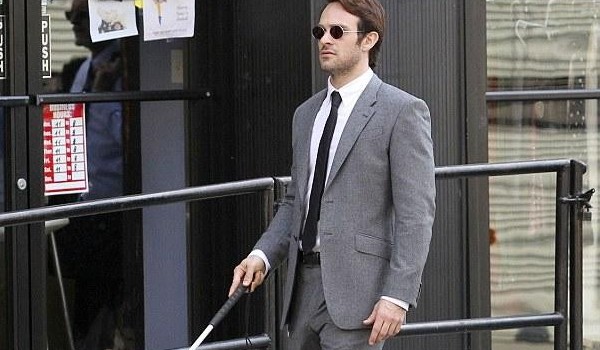 As all Daredevil fans know, Matt Murdock didn’t truly learn how to cope with his blindness or his other heightened senses until he met Stick and began training with him. Under Stick’s tutelage, Matt was able to harness his true potential and started down the path to eventually become Daredevil.

But, who taught Charlie Cox, the actor who portrays Matt Murdock on the new Netflix show?

The answer is Joe Strechay of the American Foundation for the Blind (AFB). Due to his expertise in the field, as well as being visually impaired himself,  Joe was brought on as a consultant to help Cox give a convincing performance as a character who is blind.

We had a chance to speak to Joe about his experience on Daredevil, what it was like working with Cox, and his work with the AFB.

Can you tell us a bit about your work with the AFB and the kinds of people you normally help?

JS: I am a Program Manager for the American Foundation for the Blind’s CareerConnect, a free career exploration, job seeking skills, employment process navigation tool, and e-mentoring program for youth and adults who are blind or visually impaired (VI) and the professionals who work with them. I’m basically a writer for the site, producing content, while managing the program. This includes oversight of budgets, grants, and the many independent projects. In my work, I do everything from html coding and use computers with access software, such as a screen reader software or screen magnification with a reader. A big part of my job involves travelling around the United States doing workshops for youth and adults on navigating the employment process. I’ll tell you that this is one part of my job where I get comments like “Wait, you’re allowed to travel by yourself?” Yes, yes I do. In this capacity, I teach professional development sessions and presentations for professionals who work with blind and VI communities. Additionally, I work with organizations such as the United States Business Leadership Network (USBLN) to promote the inclusion individuals who are blind or VI. This has been a great partnership for AFB and the USBLN.

How did you first get involved with Daredevil? Have you consulted on other TV shows or films in the past?

JS: AFB received an email asking questions about orientation and mobility specific to a set. I was sent the message because I had recently assisted another TV show (I assisted the writers from a television show called Royal Pains for their background on blindness.). More specifically, I had experience in this area. I had done graduate work at Florida State University in their Special Education: Teaching Children Who Are Blind or Visually Impaired, Orientation & Mobility, and Transition From School to Work. I also had been an orientation and mobility instructor in the State of New Jersey a number of years ago. I have done various work around the training of people who are blind or VI in my career. After initial discussions, they contacted me to let me know that I would have to meet with production staff in-person, and if that went well – I would meet with the lead actor. I didn’t know the show’s name until I met with various production staff, and I was asked to meet with Charlie Cox, the lead actor, later on in the week. I met with Charlie at the production studio and we hit it off. We immediately started working on white cane (The cane you typically see a blind or VI person holding) technique and some basic technology right away.

Were you only consulting with Cox or did you do any work with other members of the cast and crew?

JS: I worked with actors Charlie Cox, Skylar Gaertner (Young Matt Murdock), and a little with Scott Glenn (Stick). They were all talented, passionate, and great individuals. I was blown way by their talents. I also did work with some of the secondary characters that came in and out of the story lines. I consulted with the set designer and prop masters on a few occasions, to answer any questions. The whole production, crew and staff were top notch. I was amazed by the level of research and understanding around the blindness-related aspects they exhibited – they really wanted to get it right. Sam Thomas, a producer, was so detailed with her questions around aspects of the scenes it just showed you that this wasn’t going to be your stereotypical portrayal of blindness. Also, Shirlyn Cesar and Kati Johnston went out of their way to help me out with scheduling, helping to juggle the many conflicts with my AFB work and other aspects with the production.

What was the goal when working with Charlie? What level of adeptness was he trying to reach in terms of acting like someone who is blind?

JS: The goal was simple. Charlie wanted to give an accurate and competent representation of someone who is blind. Not a caricature of blindness, but he wanted to learned the necessary skills to portray an individual who is blind. Charlie took it to a whole new level of detail by asking questions and utilizing videos of me performing different tasks. He studied the videos in extreme detail, and would come back with a detail about my movements and manuerisms that I personally didn’t realize. Charlie was careful to explain that he wanted to be able to create an accurate portrayal of being someone who is blind. He knew that individuals who are blind or visually impaired study the blindness-related skills for months and years, and he wanted to learn as much as possible in our time together. I really respect that about him.

Charlie has mentioned in several interviews the time you led him blindfolded through the streets of New York. Can you tell us your side of that experience?

JS: I loved reading about that in your interview with him, as I totally forgot about it. When we met to do our first in-person lesson, I wanted to give him a sense of what it feels like to travel with me. We were doing training under a sleep shade (blindfold) to help him improve the utilization of his other senses. I taught him human guide or sighted guide (keep in mind, when I act as his guide, it is called human guide, as I am not sighted). I asked him to grab my opposite arm above my elbow, and I suggested putting his cane out in front of him. We then walked through his Brooklyn neighborhood on the sidewalks, crossing streets, and increasing our speed. I didn’t even think about the possibility of him being scared or nervous. I guess I should have thought about this, as any person would be as this was his first introduction to this, but honestly I didn’t. After that, we did more orientation and mobility instruction on the city blocks, and he pushed himself hard to increase his speed to travel as I do. I have never seen someone push themselves this hard, completely past their comfort level with a high effectiveness.

In our interview with Charlie, he brought up learning how to do simple household chores, like making tea. In your experience, which of these kinds of activities are the hardest to learn/teach? And, for the sake of our British readers, how does someone who’s visually impaired make tea?

JS: None of these activities are super difficult depending on your methods and adaptations. Charlie really wanted to do it in the same manner that I would do it. Persons who are blind or visually impaired can live completely independent with the right training. So, I provided multiple methods for pouring the hot water in the mug, and I said people might use a liquid level indicator, a floater or ping pong ball, or any of a few other options. I typically determine the level by the weight of the cup. I can hear the cup filling and feel the weight of the mug. This is the toughest part of making tea – not for amateurs probably. Remember, you are dealing with really hot water, and spilling can be painful.

I also brought Charlie a labeling kit, as we could label his household appliances for his use under sleep shade. Any household activity is doable and even easy with proper training and practice. The amount effort and practice that Charlie brought to activities allowed him to perform well, which is reflected in his performance and the reviews of the show.

Did Charlie pick up the skills quickly or was his sight a distraction, as Stick says in the show?

JS: Charlie is a quick study and he was able to learn through watching, experiencing first hand, and studying video. I don’t believe vision is a distraction for learning, but it can impact the ability to trust your other senses – that’s huge – as a blind person you have to trust your senses. Sort of just like Matt Murdock or Daredevil has had to do. Charlie used all of his senses to learn these activities. People with low vision or dealing with loss of vision often battle with trusting their senses and blindness skills.

What was your favourite part of the experience?

JS: Good question. I would say getting to use my skills to help impact the perception of persons and portrayal of persons who are blind in the mainstream media. I would tell you that I am passionate about television and movies, and I have been known to critique the portrayals of these types of roles. Beyond that, I feel lucky to have made a number of good friends including Charlie, members of the crew and others.

You can read more about Joe’s experience, and watch Charlie Cox talk more about it, here!