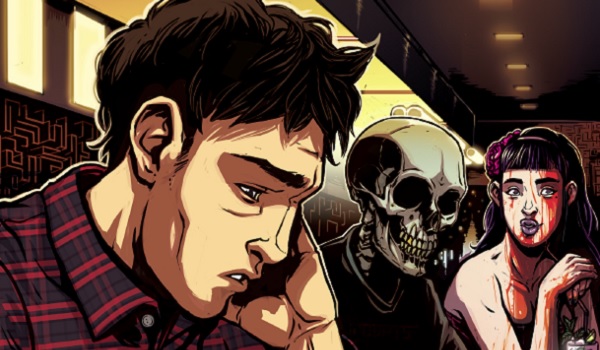 The cover of Tortured Life #1 immediately made me want to pick it up. It features a guy sitting at a bar, sadly staring down at his drink and trying not to look at either the skeleton and blood-covered girl casually hanging out next to him.

The thing that struck me with the cover is the guy doesn’t look scared. There’s a skeleton drinking a beer, so what? He’s not phased. In fact, he looks downright depressed. How did he get here? What the hell is going on? I needed to know, so I quickly turned the page (well, it’s digital, so I quickly clicked the page) and dove into the life of Richard, the man who can see how you’re going to die.

Writer Neil Gibson is no stranger to tales that run the gamut from dark and macabre to uplifting and humorous. As the founder of T Pub, a British comic book publisher, he’s written titles such as Twisted Dark, Twisted Light, Tabatha and The World of Chub Chub.

On that spectrum of genres, Tortured Life #1 definitely leans toward macabre with a sprinkling of humor tossed in amid all the dead bodies. We learn that Richard was a normal guy once, with a job and a girlfriend. One day, he sees a dead cat in the road, and then the next moment it’s alive again – until it gets hit by a car. These visions continue to happen with other animals and eventually people, to the point that Richard refuses to leave his apartment. He decides that the only way out is to kill himself. Hey, I told you this was dark.

For a comic that’s all about death, Gibson does a wonderful job bringing Richard to life. He’s understandably freaked out by this supernatural ability/curse/whatever it is, and he struggles with how to handle it. Should he tell his girlfriend? Go to a doctor? How’s he supposed to get any work done at his job? How can he look at anyone? 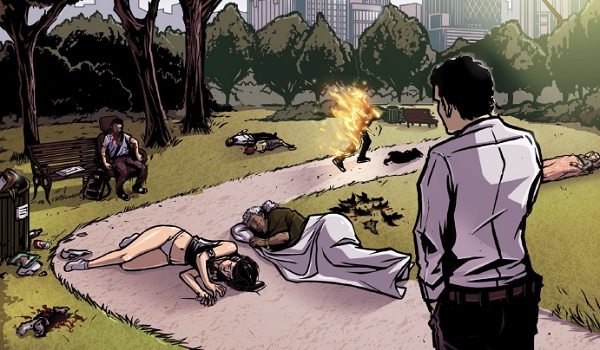 Caspar Wijngaard’s illustrations are simply fantastic. The scenes involving death are disturbing without being over-the-top gruesome, and his use of back-to-back panels to juxtapose the living and the dead is incredibly effective. In fact, the use of panels to control the pacing throughout the issue is great – a scene where he contemplates suicide is a nail-biter, and the page where he sees the cat die includes a series of panels that features Richard’s look of horror as he realizes what just happened.

Thankfully, there are some humorous elements to bring us out of the dark, even for just a split second. Some are small, like the notes on Richard’s work computer, and there’s a laugh-out-loud moment that I won’t spoil here.

Speaking of spoilers, I won’t discuss the ending, but let’s just say it definitely makes me want to pick up the second issue. If you’re at all interested in supernatural horror stories with a touch of humor and impressive art, I highly recommend checking out this title.

Tortured Life is a six-issue miniseries, and you can read the first issue for free on T Pub’s website (as well as samples of all their other comics). Once you read the first issue, let us know what you think in the comments or send us your thoughts on Twitter!