For months, people have been joking around and making playful jabs about how Ant-Man is a lame hero and how his feature film will only be a mess. I mean, come on; a film about a guy named after an insect? Who the hell would pay money to see that?

All jokes aside, Ant-Man was pretty damn good. Was it the best film in the Marvel Cinematic Universe? Nope. Was it the worst? Not at all. Ant-Man was a fun ride with a lot of comedy, great action, spectacular visual effects, and just a little bit of heart. That doesn’t mean that it didn’t have its flaws, but then again, I didn’t go into it expecting a perfect film. (minor spoilers ahead!)

A quick recap of the movie’s premise: Hank Pym is a brilliant scientist who discovers Pym Particles, which allow him to shrink himself to the size of an ant while increasing his strength. Pym’s old assistant, Darren Cross, uses this technology to create his own militarized suit known as the Yellowjacket, but he’s having trouble perfecting the shrinking aspect. Pym, not wanting the technology to fall into the wrong hands, hires expert thief Scott Lang to steal/destroy Cross’s prototype suit and data before he can complete the experiment.

Marvel Comics fans may have been disappointed with this film for various reasons, mainly because the comic version of Hank Pym was one of the founding members of the Avengers as well as the creator of Ultron. In the MCU, none of this happened. We get a completely different characterization as far as Pym goes. Personally, I don’t mind these changes. I actually liked the fact that Marvel Studios went with Scott Lang’s Ant-Man instead of Hank Pym’s (Pym is a real douchebag in the comics). Lang is more likable, and given the portrayal we saw in this film, I think he’d fit in better with the MCU’s Avengers.

Paul Rudd was a supreme choice for Scott Lang. He brings his trademark humor to the table but also shows his lighter, more serious side. He plays a caring father who only wants to do right by his daughter. It’s hard not to like Lang in the film, unless you truly despise Rudd to his very core. I will say that it was weird seeing him in an action role. He’s mainly known for his comedy movies, so this was a slight departure from his typical shtick. It’s almost like watching Steve Carell as a Jedi in the new Star Wars film (don’t get any ideas, Disney!).

Other stars who deserve recognition include Michael Douglas as Hank Pym and Evangeline Lilly as Hope Van Dyne. Both of these characters share a lot of screen time together and their chemistry just works perfectly. Lilly appears to be staking her claim in Hollywood as a bad-ass. She played a dangerously skilled elven warrior in those dreadful Hobbit films, and now she’s acting as Ant-Man’s fighting teacher. I won’t give too much away about her character, but it’s safe to say that she is sticking around for the long-haul and she may be kicking even more ass in the future.

Not everyone’s performances completely impressed me. Let me go on the record as saying that I love Michael Peña, and I normally think he’s hilarious. But in this film, he’s on autopilot. He’s been playing the same character over and over in his recent movies. Paul Rudd is the same way. Both of them just coast through on the same kinds of jokes they’ve used in previous performances. I expected this going into the film given Rudd and Peña’s past roles, but I still found myself rolling my eyes at certain points because of the predictable jokes.

The best part of Ant-Man had to be the special effects. Good lord. Marvel Studios broke new ground with this film in the visuals department. Watching Scott traverse the micro world with his ant companions was a delight. My favorite scene was when Scott first tried on the suit and learned how to shrink. The entire scene was epic from start to finish because of the way the over-sized world was seen through Ant-Man’s eyes. The visual effects studio paid attention to every tiny detail to ensure that we were truly getting the real experience of a man who’s been shrunk to ant-like proportions. 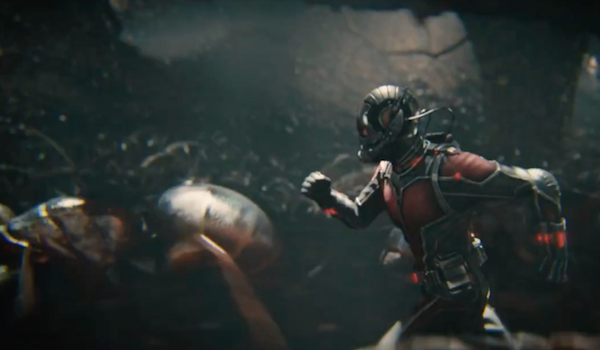 You can’t have a Marvel Cinematic Universe film without referencing the Avengers. You may have seen the trailers showing the Falcon making an appearance, and if not, prepare for an awesome scene. I loved seeing Rudd interact with an established character of the Marvel Cinematic Universe (I would’ve preferred to see him bicker with Tony Stark, but beggars can’t be choosers). Anthony Mackie‘s appearance was appreciated, especially due to his new status as an Avenger. His role, albeit brief, was easily one of the highlights of the movie.

Corey Stoll makes for an interesting yet vanilla bad guy. Fun fact: I used to call him “discount Tom Hardy” since he looks like an actual discount Tom Hardy. Anyway, the problem with Stoll in this film is that his character doesn’t get enough development. He’s a great actor who gives a solid performance as a power-hungry businessman-turned-supervillain, but the overall character of Darren Cross is almost too… stock? I’d compare him to Ronan from Guardians of the Galaxy. It’s like “Hey, this guy’s bad. The end”. We don’t get enough background to really understand why he’s the bad guy. He’s just there. Marvel doesn’t have a problem creating villains with rich characterization (Ultron, Loki, Winter Soldier), so why did they skimp on Darren Cross?

Fans of the Marvel Cinematic Universe (and Marvel Comics in general) will love the credit scenes. I implore you to stick around for both of them. The first one in the middle of the credits is for the comic fans, and the one at the very end is for movie and comic fans alike. I can almost guarantee that you’ll be cheering in your seat.

Ant-Man was a good time. Fans of previous Marvel Studios films will not be disappointed. However, if you’re tired of Marvel’s typical humor or Michael Peña’s wise-cracks, then it might be best to skip this one, or at least wait for it to hit DVD.

Did you see Ant-Man yet? What did you think? Let us know in the comments or on Twitter!