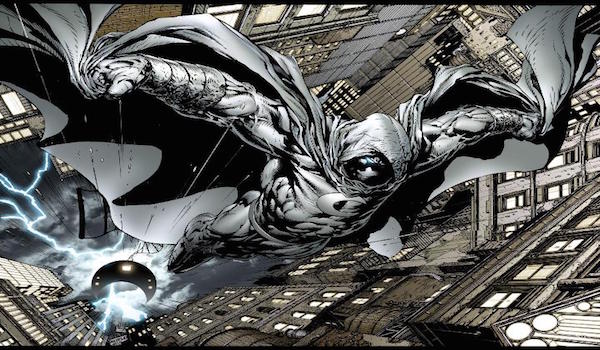 Something strange happened when I went to my local comic book store.   I said I couldn’t find this month’s issue of Moon Knight and the person behind the counter said they were sold out.  Hey, we’re not talking about Spider-Man or Batman here!  Are you trying to tell me that Moon Knight issues are flying off the shelves?  Moon Knight is only gaining in popularity after a variety of character iterations (dating back as early as 1975), and it looks like he’s finally found his voice.  Here’s why you should be reading this comic:

Whereas most comics are trying to trap you in massive arcs that require buying back issues and a constant check of Wikipedia, Moon Knight for the most part runs consolidated issues, meaning that although there are references to previous events, each issue (with a few exceptions) stands alone.  This forces an economy and clarity in storytelling that is both refreshing and needed in the comic book industry.  The character of Moon Knight is a former mercenary that died but was brought back to life by the Egyptian God Khonshu to enact vengeance on bad guys.  Initially critiqued as a Batman clone, Moon Knight (aka Marc Spector) has become a unique persona in the past 1o years.

Moon Knight has an accessibility to him.  When Grant Morrison wrote for Superman and Batman, he made them too powerful and unrelatable.  In recent issues of Superman, they had to depower him, and currently, Batman’s role has been filled by someone else other than Bruce Wayne for purposes of accessibility.  Although it’s still not clear if Moon Knight is augmented in some part due to his relationship with the God of Vengeance Khonshu (in previous versions of Moon Knight, he had increased strength based on phases of the moon), for the most part he’s just a regular guy who has trained really hard to make his fighting prowess sharp.  Oh, and he’s got a lot of cash to make cool moon-shaped weapons and vehicles.

Moon Knight has become a modular character with a variety of personas (Mr. Knight, super powers, armored version).  Many writers have created scenarios in which superheroes have to change their costumes, such as Spider-Man, Iron-Man, Batman, and even Superman.  Moon Knight has a battle armor version, a ninja version, and suave businessman version that all run around to investigate “weird crimes.”

Speaking of what he does, he fills a very specific niche of story.  The Fantastic Four take on villains that eat planets.  The Avengers fight against giant teams of bad guys and robots.  Then you have the street-level super-heroes that, although can take on a super villain, can also stop purse-snatchers from making off with your dough.  Moon Knight is in the same category as Daredevil or Spider-Man, but takes it one step further by investigating “weird crimes” such as punk rocker ghosts and a demon that hides under the beds of children.  Moon Knight was at one point an active member of the West Coast Avengers (and even most recently the Secret Avengers), but now prefers to be a lone wolf (he ditched his sidekick, Frenchie, for automated vehicles that operate via voice command). 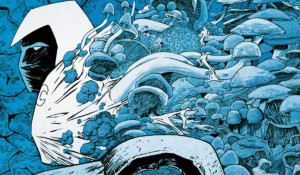 In a recent issue, Moon Knight found himself breathing in someone’s dreams. Whoa.

What’s great about Moon Knight is that he can be accessible for any generation with minor alterations. Ant-Man was a very fun ride with lots of action and comedy but they certainly changed large chunks of the character’s continuity to make things work.  Creating a much older Hank Pym to mentor Scott Lang felt like a good fit and no one is really crying foul over the changes.  However, minor tweaks such as taking away Superman’s red tights or Batman’s cowl design can have even the most casual fan up in arms.  Moon Knight has a great assortment of villains and allies but his long time associate Frenchie or his on-and-off-again girlfriend Marlene can easily be removed to allow for him to be friends with Daredevil or allies with Iron Fist.

Let’s say Moon Knight hits it big and winds up on Netflix or even with a movie of his own.  He has a great backstory, but fortunately, it can be changed to accommodate the newest Marvel fans.

What’s your favorite Moon Knight persona?  Is it the fashionable Mr. Knight?  Or is it his old school adamantium armor?  Let us know in the comments or on Twitter!

Chris has been a comic book fan and science fiction fan longer than he has been alive (this is due thanks to a temporal paradox). He has a YouTube channel called All Hail RETCON that explains fake 80s technology and has written a "healthy" amount of Star Trek fan fiction.