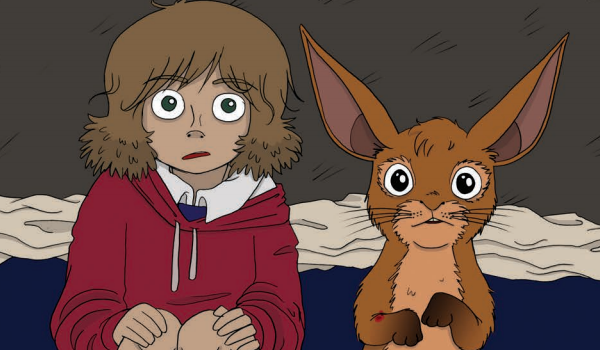 Fourteen year old Eleanor and nine year old Kathy have run away from home. They’re trying to get by on sugar sandwiches and spend their time in a fantasy land of their own creation. Their relationship isn’t all roses; Eleanor is very nasty to her little sister, and as their lack of preparation becomes clear, they fall even further apart. But going back home isn’t possible: they’re fleeing their difficult home life, and a father who’s gone off the rails. After a run-in with some boys shows just how precarious their position is, Kathy accidentally hurts a rabbit, which she adopts and christens Craig. After spending the night in a tent, the sisters wake up to find that Craig has grown and can talk. And he’s hungry.

Rachael Smith draws and writes her books, which in itself isn’t uncommon in the independent comic scene, for practical reasons. But usually the creator will be more or less skilled in either respect; in Smith’s case, not only is she excellent at both, but her skills compliment each other. Her stories revolve around honest, complex truths, and her art has a homemade feeling to it on the surface, which is underpinned by very strong understanding of panel composition and character design. Rachael’s getting really big now- she was nominated for Best Emerging Talent at the British Comic Awards last year, and she’s currently drawing for Doctor Who over at IDW- but her debut graphic novel House Party, was one of the first books we really championed on this site. We liked it because it showcases amazing skill in constructing human characters, both in the writing and the art of the book; The Rabbit builds on those themes by presenting an altogether more serious plot with heavier characters. 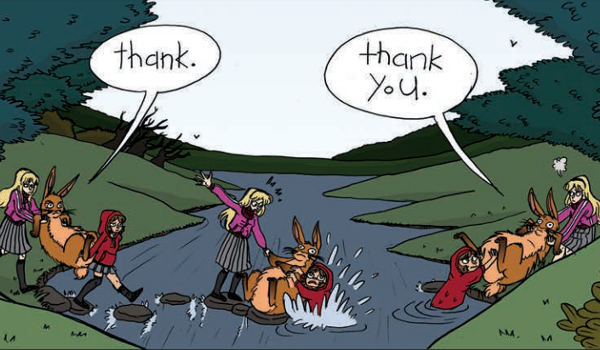 Here, Smith’s skill with characterisation (and character design) is more than up to the task. It’s a return to animal characters, a subject matter she perfected with Flimsy the Cat, her Tumblr-famous pet creation. But Craig the Rabbit is a very different creature; as he grows, he moves from disarmingly sweet to disturbingly greedy, obsessive and controlling. His physicality changes as his character does, his cute little belly swelling to gigantic proportions, his teeth lengthening and sharpening, his eyes more narrow and dark. Here you can see The Rabbit sitting happily in the company of Miyasaki and Studio Ghibli‘s works, in the switch between reassuring and grotesque. This happens alongside or in response to a similar change in the sisters’ relationship: Eleanor’s aggression and controlling nature at first rises to the fore, but begins to diminish as she realises they’re in danger. In both cases, these transitions reflect the ambiguity and unsureness of youth, a constant theme in the book. 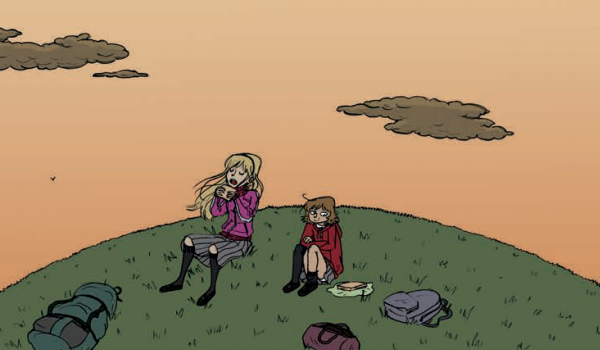 So what’s better? Is it Smith the artist, whose homemade aesthetic and caricatured designs masks a fluid understanding of composition and character design? Or is it Smith the writer, whose work betrays a fascination with the transitions between youth and adulthood, a dislike of traditional genre, a poppy exterior overlaying a melancholic but hopeful worldview? But as it happens, here’s the best thing about Rachael Smith: I don’t have to pick. And if The Rabbit is anything to go by, she’s a creator we can’t wait to see more from.

The Rabbit is available now from Avery Hill Publishing. Order your digital or hard copy today!