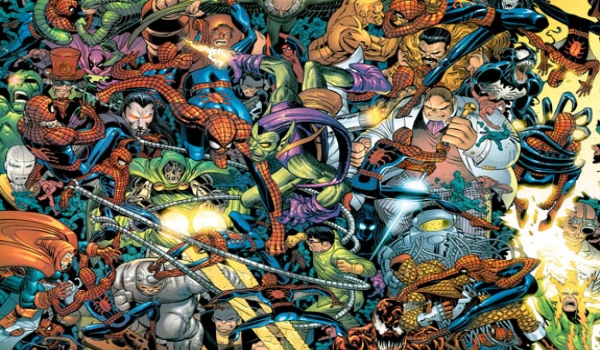 Cor blimey, has Spidey got a mahoosive rogue gallery! And it’s filled top to bottom with iconic and dangerous villains, so suck it Flash! Mirror Master? Try Venom on for size! The Top? Green Goblin could eat him for breakfast! With such a large selection of baddies to choose from, it’s impossible to pick just six, or even ten. So we’re gonna do something a little different.

A bunch of us at AP2HYC have selected our own favourite villains and explained why we think they’re the baddest of the bad. This is a big one folks! Let’s get this party started! 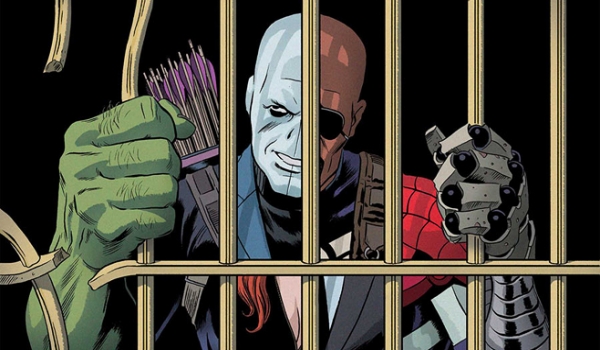 How is it that, in over five live-action Spider-Man films, we’ve never seen or heard of the Chameleon? This was the guy who started it all. The Chameleon was actually the very first super-villain that Spider-Man ever faced in the comics. Before the Lizard, before the Green Goblin, there was this master of disguise hounding after our favorite web-head. The Chameleon can change the way he looks and sounds, making it incredibly easy for him to execute covert missions without being detected. He used this tactic to impersonate Spider-Man himself so as to frame him for a major theft, which almost led to Spidey being gunned down by the police. The Chameleon has also impersonated Captain America in an effort to sneak into the Avengers Mansion. Yeah, this guy may have caught Spider-Man off-guard a handful of times, but he’s also infiltrated the home-base of Earth’s Mightiest Heroes.
It’s a shame that so many films have neglected to bring this character to the world of live-action, given that he has such a wide array of talents and an extensive history with Spider-Man. Let’s hope that we see Chameleon make an appearance in the MCU sometime soon, possibly teaming up with his half-brother: Kraven the Hunter.
Z B Hunter – The Lizard 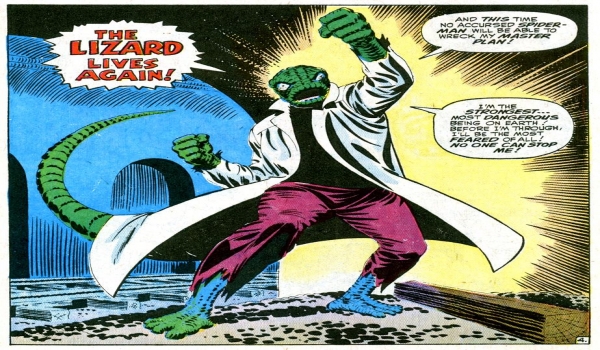 The Lizard is my favourite simply because his back-story interested me the most. Something in me always gets excited about the possibilities of medical science advancement (even though I chose not to become a doctor, but that’s neither here nor there), so when I was first introduced to Dr Curt Connors/Lizard, I completely geeked out.

In brief, Dr Connors was a surgeon for wounded soldiers until he lost his arm in an explosion. After obsessing with reptilian biology and testing a reptile DNA serum on himself, he grew his arm back… and also transformed into a 550lb lizard! How did he not see that coming? Anyway, what makes his story so great is that it is pretty much a spin-off of the classic Dr. Jekyll and Mr Hyde tale, but with bonus features like regenerating limbs, mind-control over other reptiles, and super-strength and incredible agility that surpasses Spider-man’s.

And as if it couldn’t get any better, there is the internal conflict of having a dual-personality where each is trying to supress the other, and so you get much more character development to digest. I just wished they had explored it better in The Amazing Spider-Man reboot. Oh well, I guess I’ll have to wait pray for Marvel to bring the Lizard into the MCU. I’ll just be here, writing a fan-fic where he stumbles into the home of the Teenage Mutant Ninja Turtles. CROSSOVERRRRR!

(And I guess Mr Lizard is a popular guy, ’cause…) 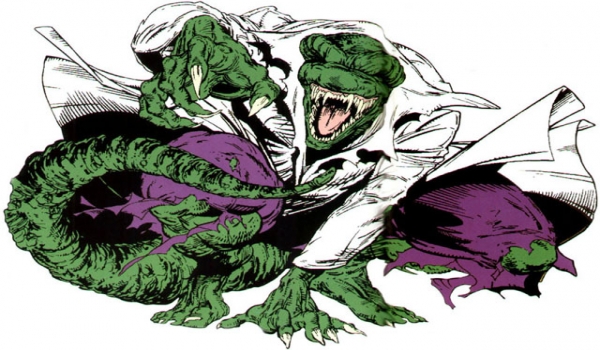 The reason why I find this character so interesting is because, yes you may find he’s not the most powerful villain in the Spider-Man universe, but it is his connection with Peter Parker I find most fascinating. He doesn’t choose to become a villain; however, it was his desperate attempt in restoring his amputated limb which results in him gaining this animalistic form. Now for me this is why I believe the character becomes so interesting because, from this animalistic form, you get to see an intriguing case of Jekyll and Hyde syndrome making the Lizard so dynamic as a character that Connors struggles to balance his humanity and the relentless, cold lizard side.

However, as a result of Connors constantly trying to fight his animal side, you get to see this unique connection with Spider-Man. As Parker sees the good in The Lizard, it makes each confrontation emotionally difficult because, at the end of the day, he is fighting a good friend, and with Spider-Man seeing all the pain that is surfacing in and around the Lizard, you then see a sense of suffering in Spidey too.

This is why I’d always pick the Lizard as my favourite villain because, it’s not just the case of protagonist vs antagonist, there’s actually character development between the two of them throughout each fight, making every battle really hard for Spider-Man. I mean, come on. would you find it easy fighting one of your best friends who’s mutated into a monster? 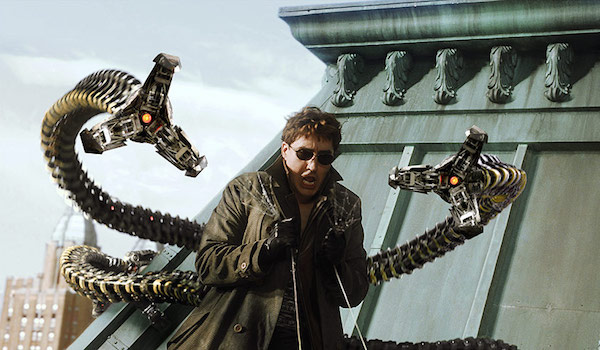 Doctor Octopus is the alter ego of Dr. Otto Gunther Octavius, and he is able to match Spidey in many ways. The four super-strong metal tentacles fused to his back due to a freak lab accident takes Spidey’s climbing advantage away, allowing him to be able to battle Spider-Man up the sides of buildings, on moving trains, and probably everywhere else. This was evident in the movie Spider-Man 2, where he was portrayed by Alfred Molina.

With all of this and his extensive history as one of Spider-Man’s greatest foes, what makes him such a great villain to me is what happened in the recent Superior Spider-Man story.  Doc Ock successfully switched consciousnesses with Peter Parker after falling terminally ill due to years of crime and fighting superheroes, thus leaving Peter’s consciousness in his decaying body.

Otto wanted to leave a legacy and be a better Spider-Man and a better Peter Parker than Petey ever could be. Superheroes pride themselves in making the world a better place, and if they fail to do that, then what purpose do they have? For Doc Ock to go around living Peter’s life, and proving that he can be the ‘Superior Spider-Man’ makes this one of the most personal rivalries Spider-Man has ever had. 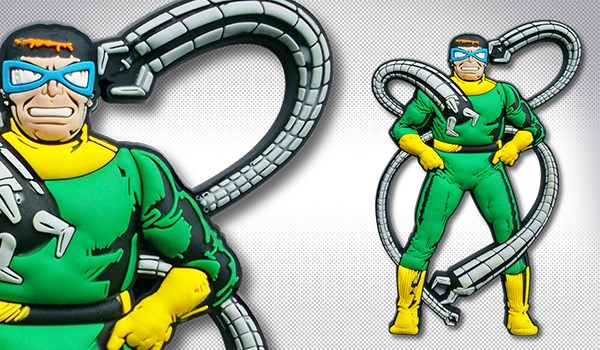 Ah, Doc Ock. Lets see… what sets him apart from other members of Spidey’s rogues gallery? Hmmmm, well, he’s insane? Nah, most of them have a screw or two loose. Ummm, he nearly married Aunt May? Nah, that was silly. He was the Master Planner and nearly caused Spider-man to drown buried under tons of machinery? Getting better. He caused the death of George Stacy, one of Spidey’s closest allies both in and out of costume. Even better! There’s something missing… what could it be? Oh yeah.

HE SWITCHED BODIES WITH PETER, CAUSING PETER TO SEEMINGLY DIE IN HIS OWN TERMINALLY ILL BODY, THEN PROCEEDED TO RUIN HIS LIFE AND CONDUCT A REIGN OF TERROR ACROSS NEW YORK, TRYING TO BECOME A “SUPERIOR” SPIDER-MAN, ALL WHILE THE REMNANTS OF PETER’S PSYCHE WERE FORCED TO WATCH, AS HIS CLOSEST FRIENDS AND FAMILY WERE UNAWARE THAT ONE OF HIS WORST ENEMIES HAD PULLED A FREAKY FRIDAY WITH HIM!!! AAAAHHHH!!! AAAAHHHH!!! AAAAAAAAAAAAHHHHHHHHHHGGGGGGHHHHHH!!!!!

So yeah, he’s not a nice chap. 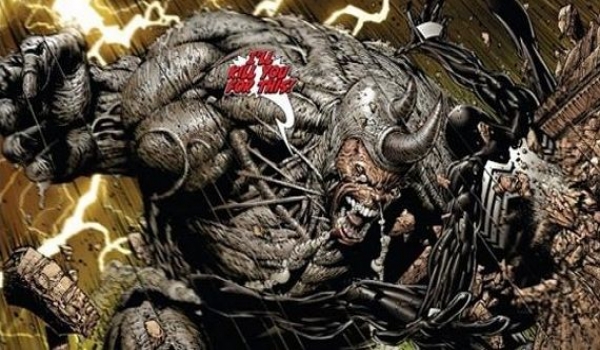 The Rhino is a great character because of his simplicity. At the most basic level, he’s a big dumb wall of muscle that hits like a freight train and can shrug off bullets like they were ping-pong balls. You need someone to run through the wall of a bank vault? Rhino’s your guy. Other villains might be smarter, faster, or have more interesting abilities, but if they fought the Hulk on a regular basis as the Rhino does, they’d be a thin red paste on the pavement.

What’s more, Rhino was the star of one of the more interesting Spider-Man comics.  Flowers for Rhino saw him gain super-intelligence from a bit of experimental brain surgery and go on to become a master criminal before realising his new smarts were making him unhappier than he was before. Despite its knowingly silly premise, this story managed to be both thought-provoking and pretty moving.

He was also Santa Claus once. How many supervillains can put that on their resume?

(And as a special bonus…) 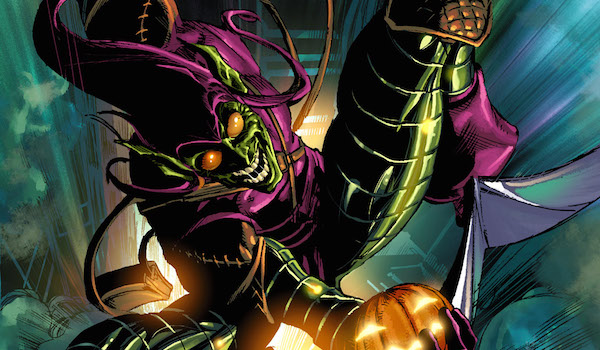 Xander, the 5-year-old creator of Thunder-Man, is a massive Spidey-fan.  He lists Spectacular Spider-Man and Ultimate Spider-Man as two of his most liked tv shows, and will always pick up a Spidey comic when visiting his local comic store.  He loves how Spidey fights and swings on webs, but also thinks the villains are “awesome”.  He lists Venom, Rhino, Sandman and Electro as “epic”, but when asked his favourite he was quick to answer, “Green Goblin!”

Why Gobby? “Because he throws pumpkin bombs!  And he’s scary and creepy, when he laughs I get shivers…”  But what incarnation of the Goblin does Xander like best? “I don’t really like it when he has a hat. I like it best when he has armour on.”  So the Willem Dafoe movie version ticks the boxes! And the definitive reason why the Goblin is his favourite? “Because, well, he’s just COOL.”

But what do YOU think of these villains? Are they the cream of the crop or the detritus of the… I dunno, something that has detritus that also begins with D. Let us know in the comments or on Twitter! Check out the awesome Thunder-Man here!