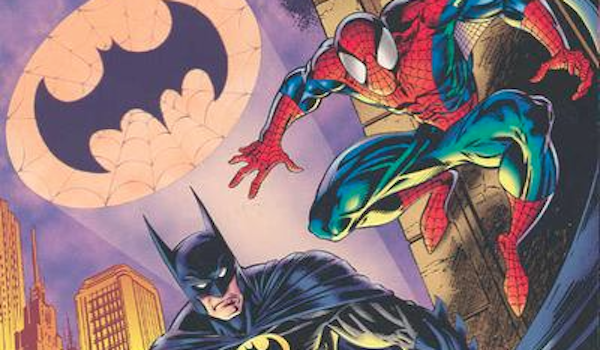 When you think about it, Spider-Man and Batman are pretty similar characters. They’re both superheroes who lost their parents at a young age, they’re geniuses with the ability to come up with fancy gadgets and tools, and they ultimately believe in using their powers to uphold justice and responsibility. It’s no wonder that Marvel and DC teamed up to create the Spider-Man and Batman comic back in 1995 so that the two iconic heroes could finally come face to face. But how enjoyable was the story? (spoilers ahead!)

The comic begins with both Peter Parker and Bruce Wayne waking up from similar nightmares. Parker is having flashbacks of the man who shot his uncle dead while Wayne remembers the thug who gunned down his own parents. At the very end of each characters’ nightmare scenes, we catch a glimpse of the men responsible for the crimes. It turns out that the Joker was Uncle Ben’s murderer and Carnage/Cletus Kasady was the gunman who killed the Waynes.

Here we have yet another similarity between Spider-Man and Batman: they both share a villain with a passion for chaos. Everyone knows the Joker and what he stands for, but I don’t think as many people are familiar with Carnage and how he is almost like a supernatural version of the Joker with similar ideals. You’d think that this comic would use Green Goblin or Venom as a main villain since he’s more iconic in the Spider-Man lore. However, I think it was ultimately a wise choice to go with Carnage due to his chemistry with the Joker (and with Batman).

Behavioral psychologist Dr. Cassandra Briar wants to install a special chip in Carnage’s mind that would neutralize his psychotic tendencies and turn him into an obedient citizen. Briar also wants to test this out on the Joker after he breaks out of Arkham Asylum for the umpteenth time. The chip seemingly works for a brief moment until Carnage reveals that he was faking his obedience and breaks loose, kidnapping the Joker and escaping into the bowels of Gotham City. Spider-Man, tasked with keeping an eye on Carnage throughout the chip-implementation, encounters Batman and the two realize what they’re going up against.

Naturally, Batman is very hesitant to team up with Spider-Man. The Dark Knight is not a fan of someone else trying to play the hero in Gotham. There’s the classic clashing of heroes in the middle of the comic before Bats wises up and recruits Spidey to help him out. He realizes that he’ll need all the help he can get to take down two of the craziest supervillains in the world.

Things get dicey for Carnage after he disconnects Joker’s chip and restores his old personality. The two have very conflicting personalities as far as instilling chaos goes. For Carnage, the thrill is in watching people beg for mercy at his feet before he murders them. As for the Joker, he’s all about theatricality (paralleling Batman’s own preferences). He likes making a huge show and playing out the situation as if it were a big production. The two villains briefly fight and the Joker escapes.

The final showdown with Batman and Spider-Man versus the Joker and Carnage is brief yet exciting. Rather than battle their own archenemies, the two heroes swap and take on their partner’s nemesis. As mentioned earlier, in this storyline, Kasady was the man who killed the Waynes, so Batman settles the score and takes down Carnage. The Dark Knight discovers the true psychology behind Carnage and his passion for murder, and uses this information to defy him. Spider-Man seeks revenge on the Joker for murdering his Uncle Ben, but he ultimately decides against killing him, demonstrating yet another similarity to Batman. Instead, he cold-cocks him and leaves him to get picked up by the authorities.

With the villains defeated, the heroes decide to part ways, but they share one last handshake, showing their respect for one another and permanently solidifying their friendship.

Spider-Man and Batman is a fun comic that doesn’t lean too heavily on only one character. There’s a fair balance between both Spidey and Bats, and it never feels like one is trying to get the upper hand on the other. This is how the relationship with comics SHOULD be. People are always so busy trying to prove who is better between Marvel and DC that they never just stop to enjoy seeing their favorite heroes do what they do best. I’m glad both publishing companies were able to produce such an effective comic that gave both sides equal representation.

My only complaint? It was too short! The comic can be finished in twenty minutes yet the story could’ve been spread out to a full-length graphic novel. Then again, it’s meant to be a tiny one-shot crossover, so I can understand why they didn’t go too deep into the project. Nevertheless, whether you’re a Spider-Man fan, Batman fan, or just love both, then this is a comic you should add to your collection.

Have you checked out Spider-Man and Batman yet? What did you think? Let us know in the comments or on Twitter!