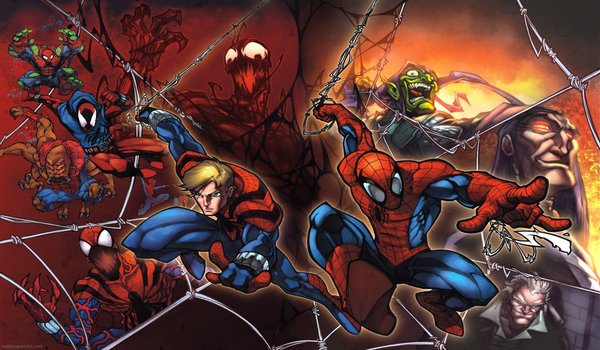 For Spidertember, we are looking back over fifty years of Spider-Man and his contributions to the comics franchise and subsequent media tie-ins. Everyone’s favourite friendly neighbourhood wall-crawler has had a lot of ups and downs over the years but perhaps his most infamous story, or rather one of the worst comic book stories of all-time in some eyes, would be the confusing, convoluted tale known as The Clone Saga. More like the “Groan Saga”.

Originally a brief story arc in the 1970s, the idea of having a cloned Spider-Man was reintroduced during the 1990s where every comic book had to be dark, gritty, and have the most convoluted, uncontrolled writing of all time. Superman had died, and Batman was starting to throw people off rooftops, so Marvel thought the world’s third greatest superhero needed to do something radical. Here is what happened. Buckle up, as it gets a little confusing.

The 1970s story was short and sweet, written by Gerry Conway. It all began with Spider-Man’s greatest story – The Night Gwen Stacy Died. In it, Spider-Man’s girlfriend Gwen is killed by his archnemesis, the Green Goblin, who was then impaled by his own glider and died himself. And while Peter Parker mourns Gwen’s death, he isn’t the only one.

We meet a new supervillain called the Jackal, actually Gwen’s former teacher, who had a stalker-esque crush on her. The Jackal goes nuts, masters the science of cloning, and creates a clone of Gwen. However, he also makes a clone of Spider-Man as well for good measure. The two Spider-Men duke it out to decide which is the real one and who can stop a bomb, but the Jackal has a change of heart and dies defusing the bomb. One of the Spider-Men is killed too, and the survivor wonders whether or not he is the original, leaving it as a mystery.

That should have been the end of it. But in the 90s, Terry Kavanagh and a bunch of other writers came up with the idea to reintroduce the cloned Spider-Man in a new hip, fresh, and totally radical story – also known as Maximum Clonage. The cloned Spider-Man shows up, alive all along, now named Ben Reilly, having led his own life as the Scarlet Spider. The story is particularly complicated but it was written so Peter could retire to start a family with a pregnant Mary Jane Watson. Oh, and there was also the big exciting plot twist that revealed that Peter was the cloned Spider-Man and Ben Reilly was the original one, which paved the way for Peter’s retirement. The story was meant to last about a year, but it was so successful that the writers were encouraged to stretch out The Clone Saga as long as possible.

Other things happened like the introduction of an evil clone named Kaine who murdered several members of Spider-Man’s rogues gallery, Doctor Octopus and Aunt May both died, new villains including Spidercide were introduced, and the Jackal also came back from the dead for a little while. Both fans and writers united in uproar, Marvel Comics was struck by a financial shakeup, and it took two years for the whole stupid saga to sort itself out. In 1996, Marvel finally decided to undo the whole mess through a boatload of plot convenience and a little bit of fanservice.

In another but totally obvious plot twist, Peter turned out to be the real Spider-Man and Ben Reilly was the clone, ultimately dying a hero. Aunt May is revealed to still be alive, poor Mary Jane has a miscarriage, and it turns out the entire running of The Clone Saga was all orchestrated by none other than Norman Osborn – aka, the Green Goblin – who never died as believed, and instead became the Lex Luthor of the Marvel universe. Mary Jane’s baby may or may not have died, as a spin-off comic series showed she survived and became Spider-Girl.

The Clone Saga was partially adapted for Spider-Man: The Animated Series. The rather effective arc featured both Mary Jane and Hydro-Man being cloned, and both tragically die before Spider-Man’s eyes. Then, in the series finale, Spider-Man encounters a number of alternate selves, including a psychotic cloned Spider-Man who fused with the Carnage symbiote to destroy reality.

The whole debacle that led to mass convoluting of the story was spearheaded by Bob Budiansky, who some readers might know as the creative mind behind many aspects of the Transformers universe. When one writer Dan Jurgens whined about not enjoying writing about Ben Reilly, Budiansky made it his mission to get Peter Parker back as the webhead. Apparently, just about everyone in Marvel from the janitors to the mailroom employees were asked to pitch ideas on how to fix the whole story. A complicated time travel story was considered to wrap up the whole thing and solve the confusing “who was the clone” plot. While the idea won the approval of the editors, the writers flat out refused to write such a dumb idea, leading to The Clone Saga being mired by indecisions on how to wrap the whole thing up.

Things became even more complicated and stressful for Marvel. Jurgens proposed the idea of Ben dying and Mary Jane’s miscarriage, and the Green Goblin’s son Harry Osborn was originally meant to be the mastermind behind the whole thing. However, Marvel’s editors were knocked down to just one, Bob Harras, who put the story’s conclusion on hold for six months to avoid competition with an X-Men crossover. Jurgens left in frustration, and Budiansky was laid off shortly after. Eventually, Harras introduced the Green Goblin as the plot’s mastermind; a decision that anyone involved in the comics weren’t enthusiastic about, but it seemed like the more logical choice.

Nowadays, The Clone Saga is highly viewed as one of the worst storylines in the character’s history. Marvel even parodied it with the comic Spider-Man: 101 Ways To End the Clone Saga, released in 1997. However, I don’t believe it is the worst storyline created for Spider-Man. That honour belongs to either One More Day, where Spider-Man makes a deal with the Devil to save Aunt May by sacrificing his marriage to Mary Jane, or Sin Past where it is was revealed the Green Goblin had slept with Gwen and had two children together. And all of these storylines have gone through such controversial decisions in order to keep Spider-Man young, hip, and fresh. I’m starting to see a pattern here.

What are your thoughts on The Clone Saga? Is it truly as terrible as people say? What do you think is the worst Spider-Man story arc? Sound off below in the comments or leave a post on our Twitter feed.