Home » SPIDERTEMBER: Why We Love Spidey 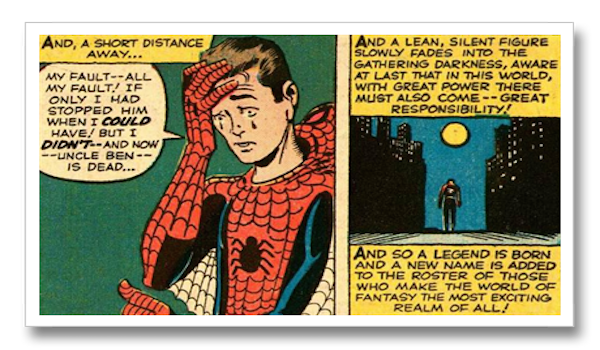 Spider-Man first web swung into our lives in August 1962 from the brilliant minds of Stan Lee and Steve Ditko as part of Amazing Fantasy Issue 15. Since then, ‘Spidey’ has become one of the most beloved characters, not just in comics or superheroes, but in fiction.

Stan Lee cites the non superhuman character ‘Spider’ from Pulp Magazine as an inspiration for his creation. Initially, the idea was turned down due to the idea of spiders probably not appealing to readers- as Stan Lee has explained. Eventually, Marvel publisher Martin Goodman agreed to a Spider-Man tryout in what would be Amazing Fantasy’s final issue.

Lee and Ditko created a character that many of us readers could instantly relate to.  Peter Parker wasn’t an alien rocketed to Earth moments before his planet was destroyed, or a rich kid who’s parents were murdered causing him to dedicate his whole life to crime fighting. Peter was a normal teenager with normal teenage problems including rejection and loneliness, places we have all been. To my knowledge, not many of us spend our time deciding which super suit to wear or whether to drive our over-powered tank or to fly our over-powered plane. Decisions, decisions!

The premise of a teenager being the protagonist of a superhero story was unheard of at the time, Stan Lee said himself to the Detroit Free Press in 1986:  “(My publisher) gave me 1,000 reasons why Spider-Man would never work … how could a teenager be a superhero? I told him I wanted the character to be a very human guy, someone who makes mistakes, who worries, who gets acne, has trouble with his girlfriend … He told me I was crazy.”

Teen heroes were normally relegated to the role of a sidekick- Spider-Man was the first to not have a superhero mentor like Robin or Bucky. The second to last caption in Spidey’s first story reads “With great power there must also come—great responsibility!” This is a lesson Peter had to learn on his own as opposed to other teenage heroes that came before him.

This was and still is a huge part of the characters appeal, as mentioned before. He is just like any of us except with superpowers. Readers can relate to him in a way that we can’t relate to Batman, Superman, Wonder Woman or other members of the Avengers, many of whose origins and stories are heavily fantasy. Peter goes to school and university, makes friends and lives (away from his superhero alter ego) as a pretty normal teenage life. He has problems we all deal with, he screws up and has to cope with things on his own whilst trying to cover his identity as the web slinger.

Over the years, Peter grew up with his audience, going from awkward high school dork to girl-troubled college student, to married newspaper photographer. He is one of us! People wanted to keep up with Petey because he’s easier to worry about than somebody like Superman, who’s damn near indestructible. Peter has flaws, and young readers worshiped him for it.

As well as comics, Spider man has enjoyed huge success in various movies, animated television series, video games, toys, collectibles, and pretty much everything else. The character appeals to all audiences, young and old, anybody who has ever been a teenager.

Spider-Man has been one of pop culture’s most beloved and iconic characters for over 50 years, with each generation growing up and being able to relate to Peter Parker.

Why do you love Spider-Man? Let us know in the comments or via Twitter!