Home » BACK TO THE BOOKSHELVES: Batman & Captain America 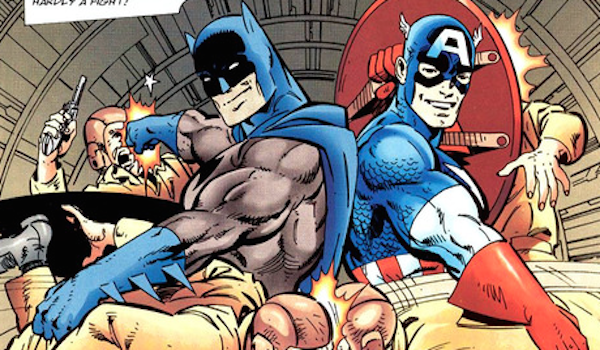 I think I have a problem: I’m obsessed with crossovers, especially in comics and literature. There are way too many crossovers filling up my bookshelf, but one in particular deserves a second look. It’s the comic that brings together one of my favorite DC heroes along with one of my favorite Marvel heroes: Batman & Captain America.

Published in 1996, this title features the Dark Knight teaming up with the Star-Spangled Avenger in order to take down (yeah, you guessed it) the Joker and the Red Skull. It’s more or less a rehashing of the previous title, Spider-Man and Batman, but with a new Marvel character taking the lead. I’m not complaining, though. I just love seeing two characters from completely separate worlds interacting with each other to achieve a greater good. Unfortunately, the comic just doesn’t pack as much of a punch as the Spider-Man title.

Batman & Captain America takes place during the height of Nazi Germany’s reign in World War II. The Red Skull is desperately pushing for the Third Reich to succeed, but he keeps getting thwarted by Captain America and his young sidekick Bucky. Meanwhile, the Joker is having his own issues in Gotham, facing down Batman and Robin yet again. The worlds of Marvel and DC cross paths when the Red Skull arrives in Gotham and teams up with the Joker to steal the highly dangerous atom bomb known as the “Gotham Project”, which could level entire cities at the flick of a switch.

What I liked about Spider-Man and Batman was that the two heroes had a stronger connection to each others’ universes. In that title, Spider-Man’s Uncle Ben was killed by the Joker and Thomas and Martha Wayne were murdered by Cletus Kasady/Carnage. This set up a solid bond between the characters that would eventually lead to their partnership. In Batman & Captain America, that bond isn’t as deep. The Dark Knight and ol’ Winghead just happen to stumble upon each other when Red Skull decides to work with the Joker. Later on, Steve Rogers is assigned to Bruce Wayne as a bodyguard due to the suspicion that he is somehow involved with the Gotham Project and thus may be the target of an attack. Eventually, the two superheroes get into a tussle and recognize their opponents’ fighting styles, leading them to deduce each others’ secret identities.

It’s apparent that Marvel and DC were trying really hard to find a way to intertwine Captain and Batman on a deeper level than just “Hey, we’re both superheroes, let’s fight together!” Unfortunately, it falls a bit flat. The biggest intertwining we see is when they swap sidekicks. Woooo – excitement! (Sarcasm font needed)

The best part of the comic is actually the relationship between the villains. The Red Skull isn’t as psychotic or threatening as Carnage, but he is still one of the more notable Marvel villains, and I think that if anyone else on the Marvel roster could stand a partnership with the Joker, it’d be him. What’s funny is that there is a sequence where the Red Skull is actually a little too extreme for the Joker! To be precise, the Joker doesn’t approve that the Red Skull is a Nazi. As the Clown Prince of Crime states, “I may be a criminal lunatic, but I’m an American criminal lunatic!” 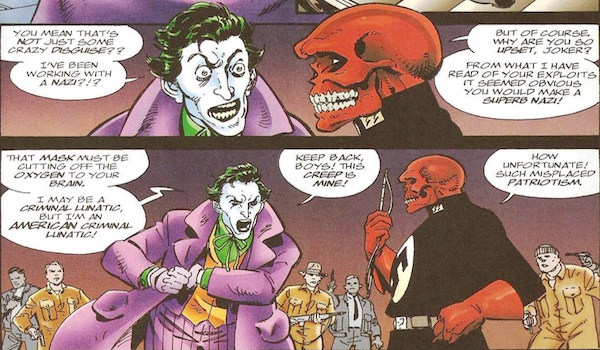 Their bond broken, the villains briefly square off and exchange blows; and by exchanging blows, I mean they try to poison one another to no avail. See, the Joker’s Venom is too similar to the Red Skull’s Dust of Death. Since the villains are immune to their own poisons, their opponents’ concoctions have no effect on them. So they’re essentially locked into a stalemate, but they’re still focused on taking out Batman and Captain America.

There’s one panel that always makes me laugh whenever I scan through the book. The heroes confront the villains on a plane that is carrying the atom bomb and is preparing to drop it on Washington DC. The Red Skull is standing in the bomb’s deployment bay, taunting Batman through a window and saying how the bomb will ultimately cause America to crumble. Batman simply punches through the window and knocks the Red Skull out, saying “I think not”. It’s such a simple action shot but it’s absolutely hilarious.

In the end, Batman, Robin, Captain America, and Bucky save the day and America (of course). The comic then flashes forward a couple decades to reveal the new Batman (Dick Grayson) and the new Robin (Bruce Wayne, Jr.) discovering the frozen Captain America in the ocean. They revive the iced hero and quickly catch him up on everything that’s happened since he disappeared. The story ends with them telling Captain that it’s great that he’s back since the world truly needs a hero right now.

I appreciate what Marvel and DC tried to do with the ending of the comic by tying it into the regular established canon. It seems they really wanted to find a way to further the connection between the two universes besides just having Captain venture out to Gotham City. There’s even a moment right as Captain wakes up from his ice-nap where he screams for Bucky, calling back to the original canon where Bucky sacrificed himself to save the world. It’s the little things you have to appreciate.

Overall, I thought the comic was good, but it could’ve been much better, especially since it’s following up from the spectacular Spider-Man and Batman. However, I’m just happy we got to see two iconic heroes from different universes team up to kick some ass.

What do you think of Batman & Captain America? Is this one of your favorite DC/Marvel crossovers? Tell us what you think in the comments or on Twitter!