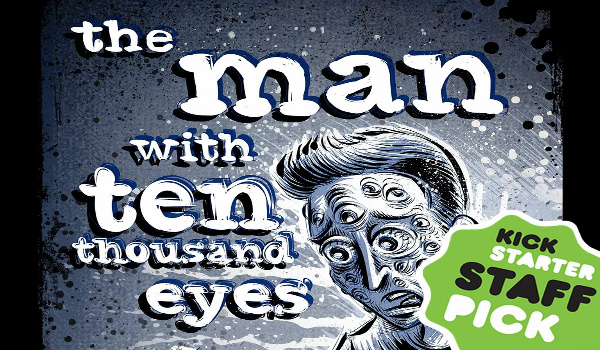 The body-horror subgenre is certainly one of the most downright disturbing styles of fiction in existence. Writer Joe Badon aims to make his new comic The Man with Ten Thousand Eyes (Kickstarter) both terrifying and humorous, as he elaborates in the following interview:

AP2HYC: Do you feel that this is an entirely new story?

BADON: I don’t think that there really are any new stories out there. Maybe new ingredients to add to old recipes. I definitely took some of my favorite weird stories, movies and ideas (such as Eraserhead, 2001, Metamorphosis and The Dark Backward) and blended them together to create something new.

AP2HYC: So this was influenced by your love of weird movies?

BADON: Yes, movies like Eraserhead, 3 Women, Belle De Jour, 2001. Art house and surrealist films have been staples in my diet recently. And as a creator, it’s far easier to create from what you love instead of just trying to create something sellable.

With this project, I wanted to use my influences of weird movies and filter them down into a loving homage to the surrealist genre.

AP2HYC: Why is the black and white art style with touches of colour so effective?

BADON: Well, I think that it gives it a noir feel which adds a more serious tone and also harkens to an art-house feel. The splashes of color happens whenever the main character has his hallucinatory, psychic visions. This is a great way to contrast his dull, blue mono-chromatic life with his trippy, surrealistic visions.

AP2HYC: Can you talk about the character Wendell and how he adapts to the situations?

BADON: I think that he stumbles throughout the story and is never really able to adapt to his ever-changing situation. Kind of like: if you trip and everything feels like it’s in slow-motion and instead of regaining your composure, you end up pulling others down with you. That’s how Wendell deals with his new-found abilities.

AP2HYC: As Wendell initially wants to use his new powers for good, do you feel that the story will examine the inherent flaws of how mankind ultimately fails to be moral?

BADON: Absolutely, the story definitely explores the idea of having the power to help or enlighten humanity but because of our own broken human condition, we end up hurting with that same power that we could use to help and heal.

The idea that a politician might want to use political power to help society but once given that power, he/she ends up lording it over others.

Or a preacher, given the ability to lead people from Hell with grace and love ends up condemning and accusing the ones that he seeks to save.

Or a doctor, given the knowledge to heal his/her patients ends up resenting their medical/health ignorance and, in the end, is unable to care for them properly.

This story definitely explores those ideas through a surrealist lens.

AP2HYC: You also say that the story will attempt to answer questions like the meaning of life?

BADON: Definitely! I think the story attempts to answer the question: What is my purpose? Why am I here? Etc… 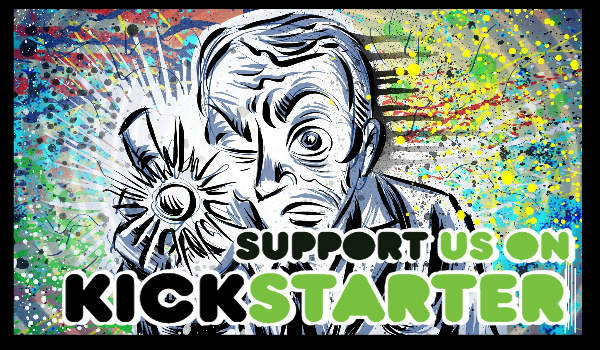 AP2HYC: As this is a horror story, will there be any particularly nasty parts?

BADON: It has body-horror elements to it, kind of Cronenberg-esque but far less gross. The horror comes from all the eyes growing on his body and from some of the visions that he has.

AP2HYC: And as it’s an indie project are you given a certain level of freedom that larger publishers would not allow?

BADON: I’m basically given complete freedom, aside from having editor friends look it over. It would definitely be different with a larger publisher. I would probably be more timid with some of the ideas that I’m throwing in there but since I’m self-publishing, I can really let the ideas flow easier.

AP2HYC: What’s next for you?

BADON: I have a couple books out that I’m illustrating (not writing) for different publishers at the moment:

Pirates, Zombies and a Cowboy through Insane Comics.

Frankenbabe, coming out through 215ink Comics this month.

You can contribute to The Man With Ten Thousand Eyes on Kickstarter and also find more information on Facebook.

Does this comic sound appealing to you? Are you looking forward to reading it? Let us know in the comments or on Twitter.