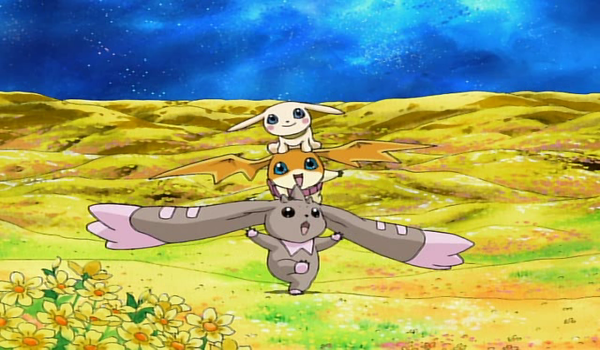 Our fourth saga in our “DigiMonth” Rerun Review miniseries has sparked the most debate amongst fans. Digimon Frontier for better or for worse does not feel like a Digimon series but rather like Power Rangers. Released in 2002, Frontier turns the traditions of Digimon on their heads – five teenagers are transported to the Digital World to fight evil, but rather than have Digimon partners to do the fighting for them, the children actually transform into the Digimon themselves. They even have Power Ranger-esque transformation sequences. And they don’t digivolve per say, or at least not straight away, but rather “slide-evolve” between two different Digimon forms. Most fans of the franchise disregard Digimon Frontier as the poorest of the series, though that honour may belong to the seventh season. So, let’s board a Trailmon and follow the railroad to Digimon Frontier.

I will admit that this season has plenty of problems – the cast is small but doesn’t develop much and some of the characters are barely even likeable, the plot mostly consists of padding and filler, and the digivolution methods are very unusual and clunky. At the end of the season, when all evil is defeated, the children are literally chucked out of the Digital World – that’s the impression the creators behind this show thought of this franchise. They didn’t care anymore.

Story-wise, it is very cut-and-paste. Five children board underground trains for literally no reason other than they are bored and want to have adventures. Or at least that is the motive for our leading protagonist and Gogglehead Number Four: Takuya Kanbara. Hot-headed, fearless, but optimistic, Takuya is the leader of the children but doesn’t really have any goals in life beyond doing what is right. The other children are Koji Minamoto, Zoe Orimoto, J.P. Shibayama, and Tommy Himi. Notice how I didn’t describe the other four. Well, I’ll get to characters in a moment. The children arrive in the Digital World, meeting snobbish exposition fairy Bokomon, and his sidekick Neemon, whose character begins and ends at “moron with stretchy pants”.

Together, they learn that the Digital World is being slowly destroyed by the evil Cherubimon and his minions. The season’s mythology is that ten Legendary Warriors gave their lives to protect the world from the evil Lucemon, each possessing elemental powers which can now be accessed by the children via a new form of digivolution called “Spirit Evolution”. Takuya becomes Agunimon, Koji becomes Lobomon, Zoe becomes Kazemon, J.P. becomes Beetlemon, and Tommy becomes Kumamon. Cherubimon’s goons, who are the five other Legendary Warriors: brainless Grumblemon; equally brainless Arbormon, who has a voice like Sylvester Stallone; Ranamon, who has a Southern Belle accent; and talking mirror Mercurymon. The evil Digimon are stealing parts of the Digital World’s “fractal code” to give to Cherubimon so he can become all-powerful.

The fifth member of Cherubimon’s minions is the enigmatic Duskmon, who uses lightsabers in battle. However, when he crosses paths with Koji, the show pulls a Darth Vader reveal on us and it turns out Duskmon is Koji’s brainwashed brother Koichi who he never knew existed. Koichi is freed and becomes a good guy, though he spends most of his time angsting over his former evilness. Eventually, Cherubimon is defeated, only for the corrupt Royal Knights Dynasmon and Crusadermon to arrive and continue the boring plot of stealing fractal code to free Lucemon. It is simple rinse and repeat throughout the show with no character arcs or intrigue in sight.

The cast of characters is the biggest flaw of Digimon Frontier. Aside from Takuya and Tommy, none of the other characters develop beyond their initial archetypes. Takuya is a bit like Naruto in terms of personality, and come to think of it, Koji is a lot like Sasuke Uchiha. You’ve seen the hot-headed go-getter/brooding lone wolf hundreds of times. Heck, Tai and Matt did this back in the first season.

Tommy is a young kid, so he has a lot of growing up to do, becoming braver when he reunites with his bullies who were also sent to the Digital World. J.P. is a fat obnoxious guy who has difficulties making friends since he usually tries to bribe them first. And poor Zoe. She is solely there as the token girl, is a useless fighter, and is primarily used for fan service. One episode features a notorious scene where Zoe (who I should mention is around 12) is daydreaming about wearing swimsuits, and one moment thankfully cut from the English version has her posing with the phrase “Sexy Dynamite” behind her. Yikes!

Koichi is okay but his constant angsting grows old very quickly. Bokomon and Neemon serve as comic relief, but their irritability varies between each episode. Later on, the team get sseveral new additions in the form of Patamon, Salamon, and Lopmon, who reincarnations of the Celestial guardians Seraphimon, Ophanimon, and Cherubimon. They are adorable and definitely provide some much need source of fun in this series when your entire cast are boring or irritating. The badguys aren’t much of an improvement either, never growing beyond their stereotypical personalities, though they do bring some laughs and I enjoy when they are all on screen together. Cherubimon’s creepiness is maintained from Digimon: The Movie, and he is actually a sympathetic character. Lucemon isn’t all that interesting as the final bad guy thanks to his monotone voice, and while he started off looking like an innocent-looking cherub, he turns into generic evil winged angel/demon with strange lips.

The show is not without its positives. The animation is as good as ever, the voice actors give a good performance (particular kudos to Michael Reisz who spent most of the show screaming and yelling), and the theme song is quite memorable and catchy, paving the way for the alternating theme songs in the following seasons.

Returning to the Power Rangers vibes, Frontier’s unusual gimmick of having the children transform into the Digimon isn’t necessarily a bad decision. It certainly brings something new to the table and it is cool seeing the children themselves fighting the bad guys. However, it brings me back to the uninteresting characters. In the past three seasons, the protagonists had Digimon partners to grow with or have as foils, creating some wonderful relationships. But because the children are the Digimon here, they have no one to bounce off of aside from Bokomon and Neemon, who are only there for exposition and comic relief. Thus, they cannot grow, and no one will point out their flaws because all of them are so paper-thin as characters.

So, Digimon Frontier is the weakest season in terms of story and characters, lacking the feel of a real Digimon season. However, it offers unique ideas, and I still see it as a stepping stone in quality, since the next season Digimon Data Squad proved to be a vast improvement. We shall cover that next time.

What are your thoughts on Digimon Frontier? Does it deserve the reputation it has gained? Leave a comment below or on our Twitter feed.