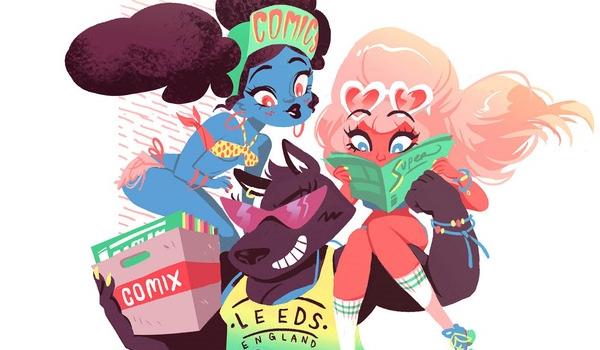 This year’s Thought Bubble is shaping up to be one for the history books. Not that previous Thought Bubbles, with their seemingly endless lists of talented comics alumni, have been anything less, but this year looks to be adding another proud feather to the caps of everyone involved. Many of our friends will be there, including Dead Universe, T Pub, SelfMadeHero, Dead Canary, and Avery Hill Publishing, all showing off just how awesome they are!

Over 100 comic books and graphic novels have made their debut at previous events, and this year’s shindig in Leeds this weekend promises to be just as diverse, so we’ve hand-picked the titles that we’re pretty certain are going to go down a storm. Make sure you check out the Thought Bubble website to know exactly who’s on what booth in which room!

The fifth and penultimate issue in Adam Cadwell‘s darkly funny vampire series won’t be one to miss. Find out more via the Blood Blokes website here!

This adaptation of Kathy Hoopman‘s looks to be full of fun adventure, and is illustrated by Rachael Smith of House Party and The Rabbit. Blue Bottle Mystery follows the mis-adventures of Ben and Andy as they discover a mysterious blue bottle in their school, unaware of the dangerous forces it contains! You can find out more via their website!

One of several unique looking titles by Avery Hill Publishing, Buttertubs tells the story of a dog who is always keen to help save those in peril. However, the fact that he can’t stop sweating butter complicates things somewhat! Find out more through Avery Hill’s website!

The second issue of this undeniably odd yet fantastic comic continues to follows the meditations of a vat-grown astronaut. You can read our review of #1 here, and keep your eyes peeled for our thoughts on #2! Here’s the comic’s website as well!

Cartoonist Edward Ross takes us on an engaging journey through the history of film in all its glory. He uncovers the good, the bad and the ugly in film-making and how its evolved, from Baby’s Breakfast to Transformers: Age of Extinction, he leaves no film reel unturned. Our review of Filmish is on its way, and you can check out the publisher’s website, SelfMadeHero, here!

Another title courtesy of Rachael Smith and Avery Hill, Flimsy’s Party Puzzle Book sees everyone’s favourite morose kitten throwing a party for all her friends, but she needs your help! Complete with a free pack of crayons, who could possibly say no to Flimsy’s little face? You can find our more via Rachael’s website here and Flimsy’s Tumblr page.

Who doesn’t want to see a comic about a frog fighting and shagging his way from cover to cover? Personally, I may give this one a miss, but anyone else is more than welcome to dive head-first into the adventures of Dead Canary’s The Frogman Trilogy!

We recently got our hands on this brief yet bizarre comic and it’s… well… bizarre! This wordless comic looks like an undeniably exciting and hilarious but short read. Keep your eyes open for our review, and here’s the website!

Horrere‘s first issue is a new horror (duh!) anthology showcasing the worst and the wonderful in deadly horror comic talent. You can check out our thoughts on the first issue here, and find out more via their website here!

We found this indie title to be an odd yet rather smooth mixture of styles. A sort of noir detective story mixed with some bonkerish cartoon appeal, we found Jupiter to be both original and funny. You can find out review of issue #1 and #2 here, and find out more via the comic’s website!

A horrifically engrossing read, Klaxon is one of several titles from SelfMadeHero on display at Thought Bubble. Kalxon follows slacker Carlisle, high on candlewax and cavity wall insulation, being thrown into a horrifying situation that involves his new neighbours, milk binges and indoor confectionery storms. Our review of this strange sounding novel is forthcoming, and you can find out more through SelfMadeHero’s website.

One of two titles released by Dead Universe Publishing, Little Terrors! follows a rag-tag bunch of teenagers who become thrown together when the world’s population is turned into horrendous beasts and strange magic floods the planet. Keep your eyes peeled for our review, and find out more on their website!

A graphic novel bursting with gin joints, black magic and carnival freaks, Merrick: The Sensational Elephant Man Vol. 1 follows the story of Victorian vigilante Joseph Merrick, who combats occult dangers in 1880’s London. Collecting issue #1-#4 and a whole bunch of bonus material, including an introduction by Uncanny X-Men and The Adventures of Superman alumni Joe Casey, this title looks like a helluva lotta fun!

Huffington Post blogger Mike Medaglia has pieced together an anthology of illustrated meditations that everyone can find solace in. Check out our review of One Year Wiser here, as well as our interview with Mike about One Year Wiser here!

Papercuts & Inkstains 3A and 3B

The ever enjoyable sci-fi anthology returns for more issues, however this time around, after issues #1 and #2, issue 3 will be released as two instalments. This is most probably due to the insane amount of awesomeness contained in them, including vampires, wild west outlaws, superheroes, and rogue hunters! You can read our reviews of #1 and #2 here, and find out more on the Papercuts and Inkstains website!

A western/supernatural merging that we think is well worth your time, this standalone project from the good folk at Dead Canary Comics has just a few days left on Kickstarter. Hunt out the Dead Canary Comics booth for the comic Marvel writer David Michelinie calls “a clever mash-up of supernatural western, with an intriguing and genuinly creepy villain.”. Coming from the guy who created Venom, that’s high praise indeed!

Check out our interview with the comic’s creator, Christopher Baker, here.

Torsobear Volume 2: All Stitched Up

The wonderfully subversive Torsobear returns with a second volume, and promises to be just as dark and deadly as its first volume. If you’re interested in getting a copy, look out for the Dead Universe table, and check out our review of both All Stitched Up and Yarns from Toyburg here!

All these and lots, LOTS more comic are blasting off this weekend! If you’re going there, why not let us know via Twitter or downstairs in the comments section? Be sure to get your hands on many of these fabulous titles, fresh from the printers!