Home » BACK TO THE BOOKSHELVES: King City 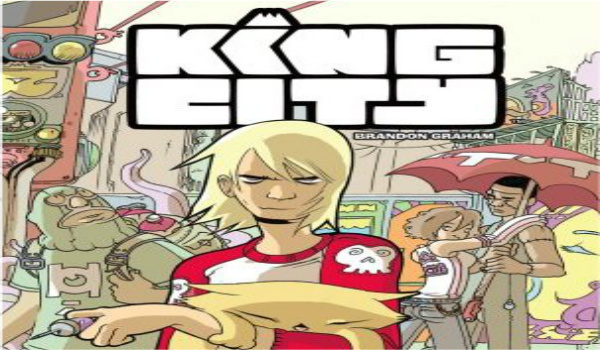 Ever had the feeling that your cat is capable of much more than just sleeping, making ribbons of your favorite chair and spilling water all over your priceless collection of autographed Twilight merchandise? Then King City is for you. Brandon Graham takes the reigns as the writer and artist of this tale (oh ho ho, I won’t make the same joke twice) in which “cat master” Joe and his trusty, four legged and completely overpowered companion, Earthling J. J. Catingsworth III get themselves into all kinds of furry -ehem- hairy situations! Sound bizarre? You bet it is. But enough frivolity! Let’s get this giant, collected edition of King City open and see what makes it purr.

King City was first published by Tokyopop in 2007 before its subsequent acquisition by and continuation under Image Comics. The book went on to be nominated for some Eisner Awards, and deservedly so. The script is expertly crafted to combine a simple yet compelling story with some absolutely ludicrous characters and hijinks. King City is downright hysterical at times, but its tremendous comedic values never distract from the overall plot; they simply entertain between moments of action. Graham’s artwork is also superb, which was my initial selling point on this book (plus cats), but more on that later. 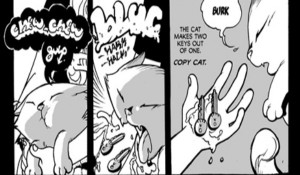 Upon returning to King City after two years worth of training (yes, with cats), Joe takes on the life of a professional “cat master,” which is basically a thief-for-hire. Eventually Joe is thrust into a nefarious and clandestine plot to destroy King City when he gets involved with a mysterious girl named Beebay. Along the way we meet Joe’s friend Pete, who wears ski/luchador masks and has his hands in some sticky business involving a water-breathing alien vixen (not my opinion). Then there’s Anna, Joe’s ex-girlfriend who is dating Max, a veteran of the Xombie War who is addicted to a substance known as “chalk” that temporarily alleviates the effects of post traumatic stress disorder but causes eventual death. Toss in an aging sasquatch named Lukashev, a gang of owls (read: not a court), a giant, Lovecraftian behemoth and an Oregon-bound-wagon-load of puns, and that’s King City in a nutshell.

Brandon Graham started his career as a graffiti artist, which really comes through in King City‘s presentation. The characters are comprised of simple, fluid lines that give them a cartoony feel, while King City itself is meticulously detailed down to the last street sign. Seriously, there is so much to look at in this book it’s astounding. I find something new in the background every time I read it. This is what makes King City so massive. The simplistic nature of the plot is not so much a weakness as a necessity; with all the humorous banter between characters coupled with the enormous amount of references and scenery to scope out, you might have a hard time remembering what was going on if the plot was too overly complex and layered. I particularly enjoyed the reference to Japanese science fiction writer Haruki Murakami. Again, this is something that is not thrown in your face, but rather left somewhere in the background for you to find. It’s like a giant, pop culture Where’s Waldo?. So keep your eyes peeled! 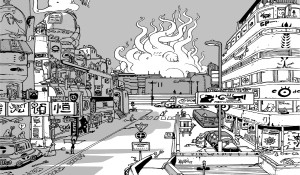 There are also a bunch of mini-games strewn about the pages of King City that you can mess around with. Tired of reading? Try playing a human sized version of the very same crossword puzzle that Earthling is solving right on the next page! Don’t like crossword puzzles? Then cut out the character game pieces and play the official board game while the characters in the story traverse King City (you’ll need those D&D dice, so get ’em out!). This aspect of King City reminds me of the backs of cereal boxes like Lucky Charms, or Count Chocula…or Captain Crunch…you get the point. I cannot stress how gigantic in every way this book really is. If you drop it from even a meager altitude it will make a loud thud. I have tried this, so you have my guarantee.

Since we are looking at the collected edition of King City it is worth mentioning that the appendix of the book contains a smorgasbord of fun and interesting features. There’s the usual cover artwork from issues 1-12 that most collected editions include, as well as some bonus King City material courtesy of Graham. If that wasn’t enough, there are some short comics by Ludroe, James Stokoe, Thomas Herpich, and Marian Churchland. Everything is wrapped up nicely in a thick, sturdy soft cover that folds out to showcase some beautifully colored artwork by Graham (the sleeves can be used to hold your place too!).

With all the film and television adaptations of comic book properties out there, it is getting harder to appreciate the comic book medium for what is actually is. There are things that writers and artists can do with comics that cannot be done anywhere else, and King City is a shining example of that; it’s unadulterated insanity, and it’s fun. This is the medium in its most pure form, and it is not something that can be consumed by the masses sitting in front of their television screens. Brandon Graham made King City for us: the fans of the almighty sequential art form known as comics. Go get it!

What are your thoughts on King City? Voice your opinions, concerns, praises and criticisms below in the comments section or on our Twitter page!