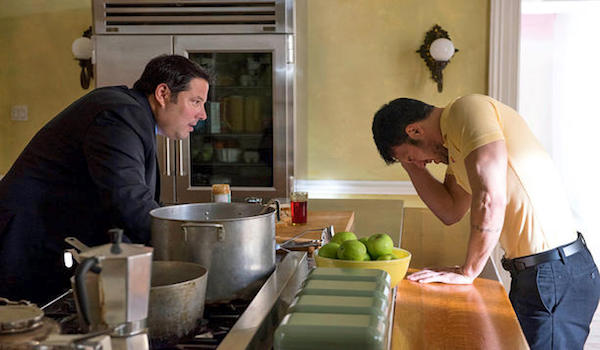 Heroes Reborn took a few dark turns in the accurately titled “Sundae, Bloody Sundae”, which aired last night. Now, dark undertones are nothing new to the world of Heroes, but this was a whole new level. And it worked! Give us more dark themes such as the ones explored in this episode. Show us just how gritty and ugly the world would be if EVOs existed. I want the rest of the season to catch these same undertones. “Sundae, Bloody Sundae,” was probably one of my favorite installments of the series so far. (spoilers ahead!)

The first thing to establish is that A LOT has changed since Noah’s trip to the past; it looks like he’s stepped on one too many butterflies. We’ve already seen how his interference has caused Quentin to turn to the dark side and join Renautas, but that’s the least of Noah’s problems right now.

Tommy drops off Anne at the ice cream parlor for work, and then teleports to the hospital to check on his mom. Casper the penny-guy follows Anne inside and plans to erase her memory of Tommy. However, before she is able to pick up the penny that will wipe her memory, Casper stops her because he sees that she’s in love with Tommy.

Joanne makes an appearance at the ice cream parlor and takes Anne hostage at gunpoint. Casper realizes what’s going on and attempts to clear Joanne’s memory with a dropped penny. Anne gives Casper a look, which Joanne notices, and she soon takes both of them hostage. Dammit, Anne! Okay, yeah, Anne didn’t know what Casper was trying to do, but she should’ve just played along. This whole conflict could’ve been resolved if Anne just let it be. 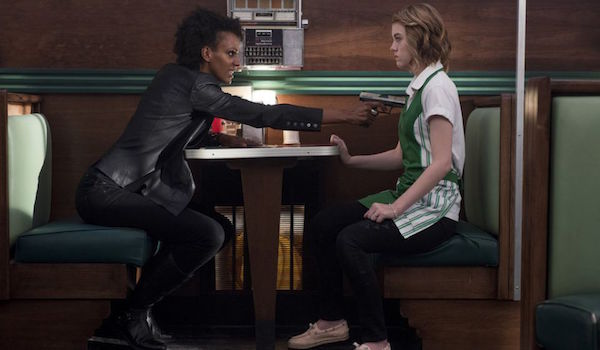 Back-peddling a bit, we visit Luke and Malina on their little road trip. Through a heavy use of metaphors, Luke explains to Malina about his family and what’s been going on since the Odessa incident. This episode went a little crazy with the metaphors. From what we’ve gathered of Luke so far, it’s not like he’s a very mysterious guy. He’s always seemed pretty direct. I don’t see why he couldn’t just get his point across right away. Instead, he has to discuss tomatoes ruining sandwiches and how his son liked movies with fart jokes. It wasn’t funny or charming or whatever; it was just tedious, especially for a character like Luke.

Anyway, Luke and Malina arrive at the ice cream parlor and see what’s going on with Joanne and her hostage situation. At the same time, Tommy arrives (after Joanne had called him from Anne’s phone informing him of the situation), and walks right into a bit of a cluster-f*ck. Joanne shoots Casper in the head, and before she has a chance to shoot Anne as well, Tommy freezes time. Pulling a Hiro, Tommy grabs the frozen Anne and teleports them away. Time starts back up again, and Joanne escapes only to be picked up by Harris.

Elsewhere, we watch the Carlos and Dearing story unfold. Remember how I was pissed that Carlos fell for Dearing’s trick, leading to him being knocked out and subdued? Apparently, they’re now working together to infiltrate a place called Sunstone, where a bunch of EVOs are being held captive. As you can guess, things go wrong quickly, and both Dearing and Carlos are captured. We see Dearing being held captive via mind control, and a mysterious man mentally forces him to go into another room, pick up a gun, and shoot himself in the head. Carlos is later seen in the same room, and we find out that the mystery man is none other than Matt freakin’ Parkman.

I had a slight feeling that it was Parkman the whole time, until the scene where he made Dearing shoot himself. It seemed a tad dark for the former hero. When we finally saw his face, I was in shock. My question now is: has Parkman been this evil for a while, or is he only in this position after Noah’s interference in the past? I’d like to think it was the latter, mainly because I can’t imagine Parkman acting this evil unless something very big happened in the past.

Anyway, Parkman pulls off the evil shtick pretty well. Instead of forcing Carlos to kill himself, he actually makes him relive his memories in the military, which is almost just as vile. Imagine being forced to go through the traumatic experience of war all over again. It’s torture. It’s almost a fate as bad as death. Parkman really is a sadistic prick at this point, and Greg Grunberg nails the role to a T.

Back at the hospital, evil Quentin and his sister Phoebe work together to capture Tommy and bring him to Erica, who begins to tell him about how he’ll save the world. Noah, on his own mission to try to save the world, heads to the ice cream parlor and encounters Malina, informing her that he’s her grandfather. Four people, two different paths to take, one goal – what will happen?

There is also a small clip at the very end of the episode where we spot Miko, somehow transported approximately 8,000 years into the future, slowly walking across a desolate Earth towards a man-made structure. Is this supposed to be a “flash-forward” of what happens if the world isn’t saved? Or maybe it’s the outcome of Erica’s plan to save the world? Who knows?

The dark tone of the episode is what sold it for me. “Sundae, Bloody Sundae” sets an example of what the rest of Heroes Reborn should be like. While the episode was heavy-handed with some of the out-of-place metaphors, it still kept me entertained the whole time. For once, I’m actually really excited for the next week’s episode.

+ I loved the overall dark undertones of the entire episode.

+ The scene in the ice cream parlor was intense.

+ Who would’ve thought that Matt Parkman could make for such a great villain?

– A little heavy on the metaphors; the deer metaphor was fine, but once we got to talking about movies with fart jokes, it’s a bit overplayed.

– Matt Parkman is super evil now – is that a result of Noah disrupting the time stream, or has he always been like this?

What did you think of the recent episode of Heroes Reborn? What other changes have happened to the timeline thanks to Noah’s stepping on the butterflies? Sound off in the comments or on Twitter!