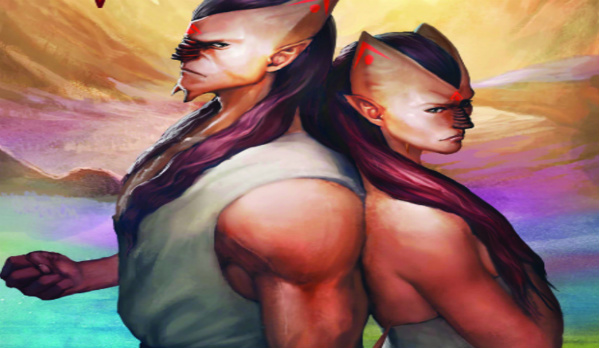 With Kuruz: Volume 2 by Sonesh Joshi currently raising funds on Kickstarter, now seems like the perfect time to take a look back at the first volume.

Aside from The Walking Dead and a few other titles here and there, very few mainstream comics these days are in black and white. You gotta hand it to Joshi not only for making the decision to have Kuruz devoid of colour, which could potential turn off a wider audience, but also to allow his own unique style to run wild. Here he have some very stylised artwork, which, while not overly detailed, certainly packs a punch. Despite the fact that most of the stories were drawn by different artists, they each present their own unique visual style without veering too far away from the others, allowing them to stand out while not alienating the reader. One of the later stories, called My Sister and drawn by Nikki Wynne, presented the only radically different art style, opting for a surreal dreamlike quality, which could not be more appropriate for the supernatural psychic child style tale that it tells.

In terms of narrative, Joshi certainly wastes no time getting into the swing of things, as the comic literally starts with the characters waking up in a mysterious jungle with no knowledge or memory of how they arrived. None of this year’s Fantastic Four movie nonsense about spending the entire first and second acts on lengthy introductions and exposition before anything interesting actually happens. Here, the action quite literally begins when the comic does. So long, tedious build-up!

While it does feel refreshing not to have to go through a lengthy build up, it does also present some issues. We are not given to opportunity to get to know, or relate to any of the characters, so at first it does seem as though we would just like things to slow down. But as the book progresses, we thankfully become more acquainted with the characters. It’s also cool to see occasional splash pages signifying dominant plot points that prompt a reaction from both the reader and the characters themselves, such as the revelation that they may have been to the location before.

Although Kuraz may seem like a hard read at first, it does unravel into a fun and engaging story. If you are a fan of Marvel’s Secret Wars and the Battleworld saga, then this might be the story for you.

The second volume of Kuruz is looking promising from what we’ve seen so far. It continues the story of Earth’s heroes and villains being stranded on a foreign planet, forced to strike out on their own. Be sure to check it out on Kickstarter.

Have you picked up Kuruz: Volume 1 yet? What did you think? Let us know in the comments or on Twitter!