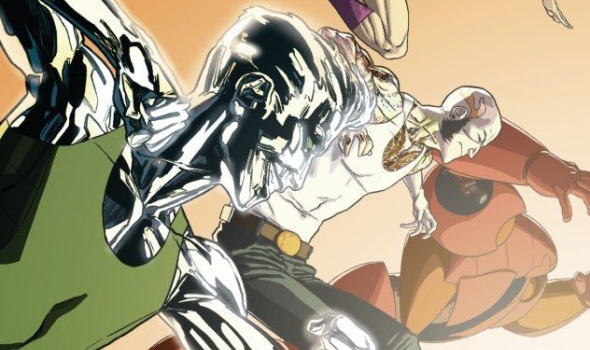 The Pride comic is a six-issue mini series that focuses on a team of superheroes that are mostly LGBTQ individuals. The Pride, as they are collectively known, are not a gay super-team; they are superheroes that just happen to be members of the LGBTQ community. The six-issue series will be reviewed at a later date, but here the sister project, The Pride Adventures, is discussed.

The Pride Adventures consists of two issues that focus on shorter adventures and stories that expand the world and characters of The Pride. The Pride team fights for fair representation for the LGBTQ community whilst also facing the bad guys of society and supporting those in the LGBTQ community that need it.

In the first edition of The Pride Adventures, three separate stories are offered. The first looks at how to deal with the mental scars and bruises that many in the LGBTQ community, and indeed any community that faces discrimination and prejudices, hold. The second story story looks at the importance of self-bravery and recognising the support and help that is out there for those that need it. The final story is entitled “In This Shirt”, and it is different in its delivery to the previous two stories. This feels more like a poem or song lyrics, and the words are provided by a band called Jamie McDermott and the Irrepressibles. This piece looks at the more extreme cases of LGBTQ abuse, in this case murder, and how it affects those who are left to pick up the pieces, with a tangible pain and longing.

In the second issue, the first story highlights how labels can be applied to a group of people, even if a separate group of people use the same name but very different actions. “Pride vs Pride” cleverly demonstrates how different people are regardless of labels and associations. The second story, titled “Moving Forward”, looks at how important it is to lead by example and to focus on teaching and leading rather than forcing people to change their viewpoints. The third story offers some short yet effective light relief before the fourth and final story, titled “A Detective Calls”, sets up a storyline for the seemingly hinted at third issue.

All of these stories focus on the pain that can be felt within the LGBTQ community based on the treatment that they may face. The stories look at strength, grief, and support in a way that offers hope and belief. The points made and the morals dealt with are poignant and well-articulated.

The artwork in both comics is dynamic and exciting. A myriad of contrasting and bright colours ensure that the pages are striking yet dark and mysterious where they need to be. In many places, the colours used match the atmosphere of the story that they are telling, being dark and monotone where the characters discuss issues such as depression or abuse, and being colourful and bright when the story displays hope or happiness.

The Pride Adventures comics highlight an important social dynamic, and a relevant social and industry prejudice that needs to be recognised on a wider scale. Taking a look at the latest GLAAD figures, it is obvious that the representation of the LGBTQ community is lacking in its realism and appropriateness, and this is mirrored in both the comic book industry and society in general. The Pride Adventures goes some way to highlight this, and strives to counteract it.

The Pride comic series has now come to an end with the sixth and final issue of the story being released at Thoughtbubble Festival in Leeds earlier this November, but we sincerely hope that the comic returns and continues to fight for the LGBTQ community both within the comic world and media as a whole. Bravo, Joe Glass and team, Bravo.

Have you read The Pride yet? What did you think? Let us know in the comments or on Twitter.