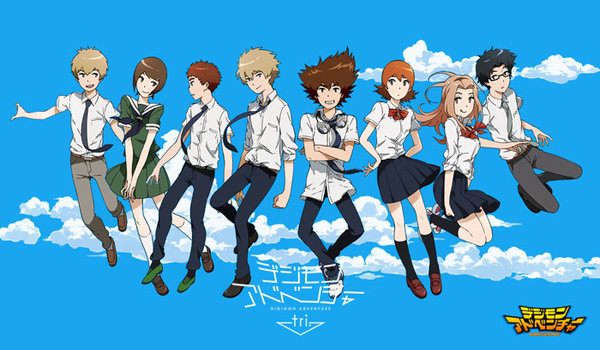 The long-awaited Digimon Adventure Tri: Reunion is the first of six movies that feature a return to the original characters of Digimon Adventure. It is a good time to be a 90s kid who grew up with the early rise of anime with the return of Dragon Ball, Sailor Moon, and now Digimon. Ever since the announcement of Tri, there has been much excitement and anticipation for its release. The first film was released in Japanese cinemas, while western audiences were rewarded with the film being split into four episodes and uploaded to Crunchyroll. People were concerned the film would be a disappointment with alternate character designs of the now near-adult cast and the use of new voice actors. But, personally, this film was awesome!

For the entire film, my experience was pure bliss. I cheered, I laughed hysterically, I was gushing in utter joy, occasionally screamed and danced about, and had a major geek out every two minutes. These were characters I had grown up with and seeing them again after so many years was just wonderful. Frankly, I spent most of the film like this: 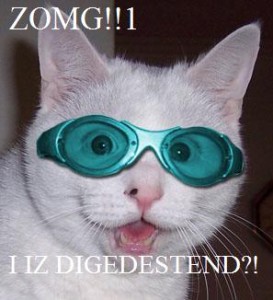 However, I still have to review this film with a grain of salt and look at both the good and the bag parts. The film is a love letter to the original fanbase, built mostly on the nostalgia and emotions of my generation and revels in it. Because of this, there are some problems which I’ll cover momentarily, but after watching the film three times, I can safely say it is a fun movie and I recommend it for any Digimon fan.

Beware of major spoilers below!

So, to the story, which is a little bit paper thin: Six years after the events of Digimon Adventure, the eight Digidestined kids are now teenagers and all in high school, and thus are dealing with high school drama. Tai is becoming melancholic that his friends are all distant now, Joe is struggling with his grades, Izzy is developing an adorable crush on Mimi, Sora is dating Matt but has feeling for Tai, etc.

The film takes its time with things to the point that very little big plot development actually happens. Kuwagamon appears and starts ripping the city apart to kill Tai. I guess old grudges die hard. Agumon, Tai’s partner, pops out of thin air and engages Kuwagamon in battle. Tai and his friends are soon gathered together by a mysterious government agency that includes Tai’s teacher Mr. Nishijima, and asked to stop the rampaging Digimon as they demolish an airport.

It was at this point during the film, where all of the Digimon digivolve old school style, that was reduced to a giggling wreck being overwhelmed by the sheer awesomeness I was watching. Anyway, the third and fourth acts of the film balance the more serious and comical themes well. Tai has grown a conscience during his teenage years and is now extremely angsty about causing mass destruction in Tokyo to the point it is paralyzing him. Matt is mad at Tai for this since they’ve dealt with this repeatedly and there is rowdy argument between them that made me feel right at home.

The rest of the film up to the last fifteen minutes or so treads water, meandering occasionally, but also serves as focusing on the characters. There is a hilarious scene where the girls and their Digimon go to a restaurant run by a blind old lady, and it is just great seeing Sora, Mimi, Kari, and co. having “slice of life” banter.

It all comes to a head in the last act when a giant Mega-level Digimon, Alphamon, materialises in the city in search for a funny-eyed cat Digimon called Meicoomon who likely has a significant role in the story. The Digidestined attempt to fight him but Alphamon proves to powerful, so it comes down to Tai and Matt to get over their emotional baggage and unite to save the day. And at the centre of all this is a new character, Meiko Mochizuki, who moves into both Tai’s apartment block and class. It is kind of obvious what her role is, but even when it is revealed, it is still pretty exciting.

So, like I said, the film does do a bit of meandering and in terms of big plotting beyond the big two fights and revelation at the end, there isn’t much going on. The government agency working with the Digidestined isn’t really explored much, but I assume it is a cross between the other such agencies seen in Digimon Tamers and Digimon Data Squad. T.K. is also seen on a website that seems to be Facebook for international Digidestined, so there is still a vast network of them.

Going into slight major spoiler territory here – in the opening scenes of the film, the main characters of Digimon Adventure 02 are seen being defeated in silhouette by Alphamon, but no explanation is given, though I suspect it might be related to Tai’s out of place angstiness. But so far, very little has happened or been established story-wise, but I think this film is more dedicated to reuniting the characters and saying “Hey, fans. We’re back!”

There is still a heavy romantic subtext to the film that does bring a lot of positives. Izzy’s obvious crush on Mimi is both adorable and funny, particularly when he reveals to T.K. that he is trying to start dressing trendy. Even Kari and T.K. get some slight flirting going on. Sora is still stuck in her love triangle which has so enraged fans even to this day. She is technically dating Matt, but obviously still has lingering feelings for Tai. The first and only scene to feature the eight Digidestined is like having a school reunion and no one has changed – Izzy blabs on about exposition, Tai and Matt argue about something, and Joe then gobsmacks everyone by claiming he has a girlfriend. While the high stakes are minimal, the emotional depth in the film is just great.

If I had to choose a character I was most happiest to see, it had to be Mimi surprisingly. Sadly Joe doesn’t get to do much in the film, not even participating in the battles due to being stuck with his studying. Mimi certainly has matured but still keeps her charming, peppy, girly-girl personality and definitely brings the most personality to the proceedings. The shenanigans with the Digimon are great fun, and it is enjoyable just watching them play around in the background while the humans are talking.

The new characters have yet to be properly explored by already I like the new girl Meiko and her partner Meicoomon. The downside is when the dub eventually comes out, the cat puns are gonna be doubled!

Aside from some minor retconning of plot aspects from Digimon Adventure 02 (no one apparently remembers the big Digimon invasions of 1999 or 2002), the whole thing work well. The production quality is beautiful. People worried about the new animation style and character designs, but all of that was flushed away, since the characters are instantly recognisable and the animation is bright and fluid. Even the old theme songs from the anime return, including “Butterfly”, “Brave Heart”, and “I Wish”, all sung by their original performers.

The second film of Digimon Adventure Tri, named “Determination”, comes out in March, but I intend on waiting patiently until then. I’ve waited nearly fifteen years to see the Digidestined return, and despite the flaws, I really enjoyed Digimon Adventure Tri: Reunion. So please excuse me while I put on my rose-tinted goggles and ride this train all the way to the end of the line! This is gonna be spectacular!

Have you seen Digimon Adventure Tri and what were your thoughts on it? Was it prodigious or dreadful? Leave a comment below or on our Twitter feed.