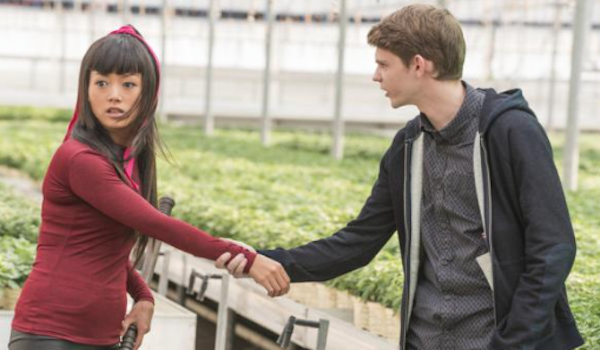 Yeah, I’m not a super-huge fan of Heroes Reborn. I keep trying to give this show a chance, but it’s losing my interest with each new installment. Every episode has few redeeming qualities, and only rarely do I come across an episode that truly keeps me engaged. Last night’s “Send in the Clones” was not one of them. (spoilers ahead!)

Coming back from the winter break, it took me a few minutes to get back into the swing of things. All I remember is that the characters are scattered across the world (and across time), and that Noah Bennet is missing. That’s about it. That’s one of the problems I’ve had with Heroes Reborn since the beginning – there’s just way too much going on, and characters are thrown in every direction. The show is like a child all hopped up on sugar. At the very most, I think shows should stick to maybe two separate perspectives, three if they can manage it properly. Heroes Reborn decides to go in like five directions. It’s difficult to pull it off in an episode that’s roughly 45 minutes.

Tommy and Miko do some time traveling back and forth, and their story essentially ends with Tommy trying to trick Erica Kravid into thinking that he trusts her. Miko heads to Sunstone Manor where she confronts Harris Prime. The two engage in an unusual yet somewhat entertaining fight, which culminates with Miko chopping off her opponent’s head, thus destroying all the Harris clones (some of which were close to eliminating other primary characters). Out of everything that happened in the episode, the fight between Miko and Harris was probably the best scene due to its cheesiness and over-the-top portrayal.

Oh, and I guess it’s worth mentioning that Miko dies during the fight after sacrificing herself to defeat Harris Prime. I didn’t really get why she was dying – must’ve been something with her video game pixel powers or whatever. 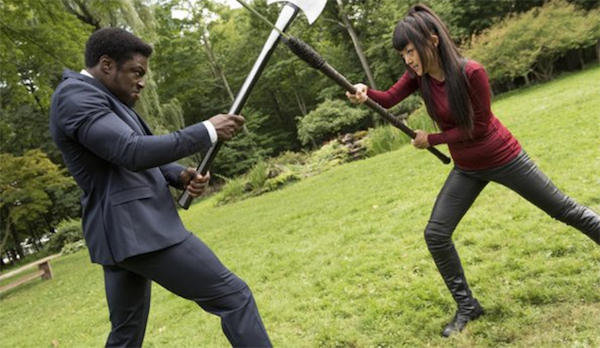 Malina and Luke are on their way to Odessa when they are confronted by Harris clones, Phoebe, and Quentin. I was interested in Phoebe’s role and powers in the show, but her portrayal in this episode made me cringe so hard. Not only did the special effects of her powers and her makeup look crappy, but also her line delivery and overall performance were just bad. I thought she did a better job when she was quiet and brooding. In this episode, she was just… blah.

Anyway, Phoebe blocks out the sun, negating Luke’s powers, but he realizes that he can be a hero even without his Human Torch abilities. At one point, he even says “You can’t block a Glock” as he holds up a gun. I’m sorry, THIS was probably the best part of the episode out of pure cheesiness. That’s something I’d expect from a Sylvester Stallone movie.

Luke shoots the Harris clones, knocks out Phoebe, and convinces Quentin to join the light side. Pretty cut and dry, and almost a little predictable. What else is new?

At Sunstone Manor, Carlos finds the El Vengador suit, and with the help of the Haitian, Taylor, and Farah, he sets out to save the other Evos. I loved seeing the El Vengador suit make a return, but that’s about all that I liked during the Sunstone Manor storyline. The heroes encounter Matt Parkman, and it’s revealed that one of the reasons he’s a bad guy now is because his family left him. Typical tragic hero-turned-villain shtick. I guess it makes sense. Almost every time we saw Matt Parkman in some future-flash-forward during Heroes, he was on the bad side. It’s like the guy is destined to be a villain no matter what.

Parkman takes Taylor hostage with the intention of using her as leverage against Erica so that he can secure his spot in the future after the solar flare strikes. Remember that solar flare? Yeah, it’s about to destroy the world in a few episodes… I mean days. So that’s why everything is on such a sensitive time scale. Doesn’t feel like it, does it? The show is meant to have this fast-paced, urgent progression, but it only feels slow and clunky, and that mid-season break didn’t help with the momentum at all.

The big climax of the episode is when Carlos and Farah release Micah Sanders from captivity and use his powers to broadcast a mass message to the world. Millions of screens across the planet show a video of Erica using a shapeshifting Evo to portray Mohinder Suresh in that earlier broadcast where he claimed responsibility for the Odessa explosion. With her ploy exposed to the world, Erica barely bats an eye and instead decides to take matters into her own hands. How will she do this? I don’t know, but it involves Luke’s ex-wife, who now seems to be working for Erica.

That’s about all that mattered this episode. I’m glad Heroes Reborn is coming to a close. I wonder how long until we get an announcement that they’re making a second season? Hey, I’ll take a second season as long as we get a proper narrative and a decent villain *crosses fingers for Sylar*.

+ The fight between Miko and Harris was alright, but still a bit too whacky.

+ I’m just glad that everything seems to finally be coming together for the conclusion.

– Not a fan of Phoebe’s makeup or performance this episode.

– Still way too much going on all at once.

– Once again, I’m having trouble caring for most of the characters.

– I’m hoping for a solid resolution to Matt Parkman’s story.

What were your thoughts on “Send in the Clones”? Are you looking forward to the last two episodes of Heroes Reborn? Let us know in the comments or on Twitter!