So, after that dose of semi-positivity, here’s some negativity to balance it out. 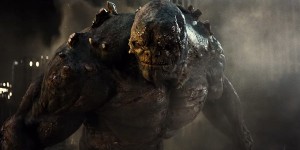 Created for a sole purpose: destruction. Doomsday’s appearance rather aptly destroyed a lot of people’s anticipation for this film. Bounding in in all his ropey CGI glory, Doomsday is offered, in the trailer at least, as the reason for Batman and Superman to put their differences aside.

He has been likened to a Teenage Mutant Ninja Turtle and a troll from Lord of the Rings but it is not how he looks that is troubling, it is his very appearance at all. Doomsday is not needed in this film. We already have Batman fighting Superman, and meeting Wonder Woman along with a hand full of other characters, adding Doomsday is like hamburger crust pizza; unnecessary and bad for your health. 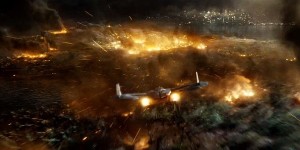 It seems Zack Snyder was also created for the same sole purpose. Batman V Superman gives the impression of amending the mass-destruction that features in Man of Steel by…destroying a city again.

The courtroom sequence looks interesting, if an obvious retcon, to schmooze the detractors to Man of Steels third act. This makes sense. What doesn’t make sense is showing the ramifications and then repeating the whole thing all over again! How did someone not look at this and say ‘hold on, people hated this before, perhaps we should reign this in a little?’. But no, instead they have decided that levelling a whole city again is the way forward! This can’t be set too long after Man of Steel so that means in the space of 2 years superheroes have levelled 2 major cities! Why would anyone trust them ever again!? But, I digress.

Now, admittedly I haven’t seen the film, but it is not difficult to analyse the flame and rubble and smashy smashing of buildings from the second trailer.

Somewhat unsurprisingly it looks as if Snyder has learnt nothing. 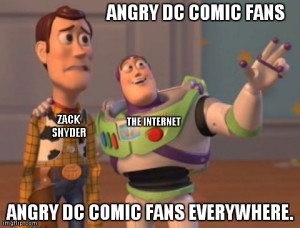 Zack Snyder has made nothing but visually interesting, average films. He is not Christopher Nolan. He is not Joss Whedon. So why has he been given the keys to the DC movie machine? He undeniably has a good eye for spectacle, but really he is just an ‘arty’ Michael Bay.

Marvel has been so successful because they have had a captain to steer their comic book filled ship. Currently DC’s captain is drunk at the wheel.

Are you pumped or nervous for #Batman v Superman? Let us know in the comments section or send us a Tweet!.