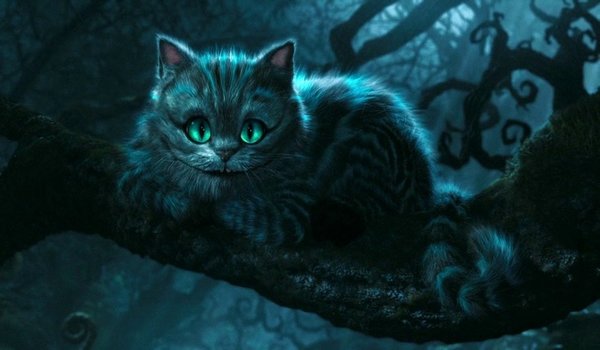 Ah, good old Tim Burton. The auteur filmmaker of twisting trees, dark humour, and gothic worlds were everyone is extremely pale and depressing. He has provided us with Batman, Edward Scissorhands, Beetlejuice, and The Nightmare Before Christmas, which are wonderful films. And speaking of wonder, he also gave us a live-action Alice in Wonderland. Produced by Disney, and the ignition for a dozen or so live-action remakes of their classic movies, Alice in Wonderland is a fun film, but strangely, tries to fit the classic nonsensical and wackiness of the iconic 150-year-old book into a “good vs. evil” story. We have an evil empire and a group of freedom fighters in Wonderland! Not to mention the characters are paper thin, the themes ironically make no sense, and everything is lost under the pretty visuals.

Allow me to be frank: I have no problem with trying to put in a cohesive story into the setting of Alice in Wonderland as long as they at least remember that Wonderland is a crazy place. American McGee did this well, and even the Care Bears did this well. Yet, Tim Burton, who should be right at home in Wonderland, downplays the nonsensical world by installing the story structure of Hero With A Thousand Faces by Josh Campbell mixed with the generic good vs. evil storylines of numerous toylines from the 1980s. You’ll see what I mean.

The film acts as a sequel to the two books by Lewis Carroll. A teenage Alice (Mia Wasikowska) wishes to escape the pale, strict Victorian lifestyle, an unwanted arranged marriage she didn’t know about, and the recent death of her beloved father (well it is Disney). So, she takes a tumble down the rabbit hole, but rather than experiencing a weird backwards trip, Alice is dragged into Fantasy Plot 101, learning the evil Red Queen (Helena Bonham Carter) has taken over Wonderland and that there is a small band of freedom fighters led by the kind White Queen (Anne Hathaway) resisting her. And guess what role Alice gets to play? By fate, destiny, and some magic toilet roll called the Oraculum, Alice is predestined to save the day by slaying the Red Queen’s monster, the Jabberwock. Yeah, another ruddy chosen one/prophecy story.

Trying to bring logic, reason, and law to Alice in Wonderland is just crazy (maybe that’s the idea?). All of the characters are meant to be nutty, and while most have signs of being quirky, none aside from the March Hare are truly crazy. The Dormouse (Barbara Windsor) starts off as a fearless warrior but after her friends are taken prisoner, we next see her messing around having a tea party with her friends like nothing bad has happened. Some characters get traces of intrigue – The Mad Hatter (Johnny Depp) is implied to have been driven mad by a tragedy, the Red Queen’s actions were caused by an unexplored relationship with her more loving sister, etc.

They just go on and on about war, fate, destiny, and what Alice must do. And since it is established fifteen minutes in that Alice is prophesized to slay the Jabberwock by the 100% accurate Oraculum, we already know the ending of the movie. That means any sort of characterization or interesting story go out the window because we know what the outcome is. The prophecy and chosen one clichés are just two of the cheapest story tropes to use in a film and I’m getting sick of it. Do something different, put a twist on them or something. And again, these things don’t work in Wonderland.

Mia Wasikowska is a good actress but she is given nothing to do here. Alice as a character is just boring, and she meanders around with vague motivations and an expressionless face. Show some wonder, girl. Alice also spends most of the film under the belief that she is in a dream. Yet, early on she states that nothing can hurt her in a dream and still thinks this after pinching herself, asking the Dormouse to stab her in the foot, and getting slashed across the arm by the Bandersnatch. How thick can you get? The Hatter says Alice lost her “muchness”, but I don’t think this version of Alice had any to begin with.

I think Alice is supposed to have an arc about finding her own path in life outside of what society expects from her, but it is so unimportant to the film. She tries to avert her destiny by going to the Red Queen’s castle to rescue the Hatter, but then we learn from the White Queen that she was meant to go there to find the Vorpal Sword to defeat the Jabberwock. So she just does what the prophecy says. Speaking of which, we learn that the Oraculum has foreknowledge of what is going to happen each and every day. So, why is it that no one noticed the date when the Jabberwock was going to attack and when the Red Queen would steal the crown? There is also a weird message about how being mad is a good thing, but Alice then scolds another character for just that.

In a way, it feels like Burton is trying to replicate the Hero’s Journey but with the Wonderland characters – you have a resistance fighting an evil empire, a magic sword, and a chosen one. The Jabberwock is the Death Star, the Hatter is the Obi-Wan, and the Knave of Hearts (Crispin Glover) is Starscream with an eyepatch. And what the hell is the Hatter doing with a broadsword? I could go on and on about the film’s misplaced story and logic, but there is just no end to its inconsistency and stupid character actions.

Let’s talk about the positives. The visuals of Wonderland are spectacular. It is very pretty and colourful, even if it was all done using green screens. The Wonderland characters look like they jumped right out of the books, resembling John Tenniel’s drawings. The acting is very good. Depp is very good as the Mad Hatter even though he is playing just another quirky, weird character. Bonham Carter is grand as the Red Queen, playing homage to Queenie from Blackadder (Miranda Richardson, who also played the Queen in the 1999 Alice film). I love Stephen Fry as the Cheshire Cat, Michael Sheen as the White Rabbit, and Alan Rickman as the Caterpillar (*sob*). The production value is good, the colourful costumes are magnificent, and Danny Elfman’s score is memorable as always. I also like the rare inclusion of the Bandersnatch and the Jubjub Bird.

The film was successful at the box office, and its sequel Alice Through the Looking Glass, is coming out later this year. Hopefully, the issues of the first film will be solved in the second one, and Sacha Baron Cohen will be appearing as Time, who will hopefully bring some much needed zaniness to these movies.

What are your thoughts on Alice in Wonderland? Will you see the sequel? Sound off below or leave us a comment on our Twitter feed.