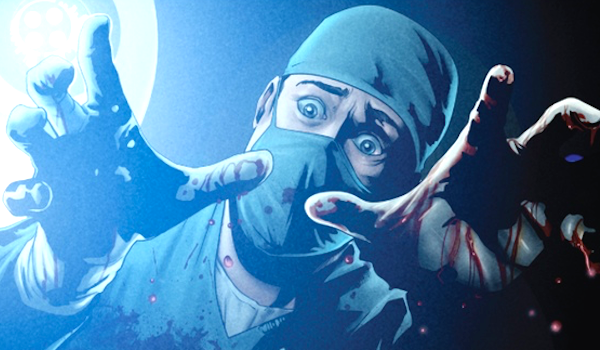 A few panels into the 16-page preview issue to Post Mortem, I knew that the series would be drastically different than any I’d read before. Putting the astounding visuals aside, the story behind Post Mortem is what truly makes the comic such an unsettling and ominous read. The self-described premise of the book reads as follows: “A dark and twisted survival comic illustrated in all its gory detail. A visual abattoir etched in to the mind leaving you bloodthirsty.”

With murder, mystery, gore, and graphics that make it seem as though viewers are baring witness to an actual incident of human organ harvesting, it’s no wonder that Post Mortem has already become yet another successfully funded project on Kickstarter.

We chat with creator Phil Woodward about the inspiration behind this gory new comic, the necessary self-limitations required to ensure that plot takes precedence over gratuitous carnage, and the importance of crowdfunding in the modern day.

AP2HYC: I got a chance to read Post Mortem: the Harvesting and almost immediately found myself cringing at the content… but I feel like that’s a reaction that this comic is actually intending to provoke. What was the inspiration behind a comic that opens with these ominous surgeons harvesting organs from a live (and likely unwilling) donor?

Phil Woodward: A lot of it has to do with fear, the fear of dentists and doctors that can really affect people in a severe way. You put your trust in doctors and surgeons because after a certain point that’s all you have left, and from personal experience of friends with phobias, it can really deeply affect a person when that barrier is broken.

There is a distance that films with supernatural killers, like Friday the 13th, that are unable to close down and you enjoy because of the sheer brutality of the film.  The distance is severed literally with subject matter that plays on the mind.  Stuff that has basis in the real world.

Some people actually hide their faces and cover their ears with the likes of Casualty and Holby City, so imagine that ten fold with a more gruesome outcome and you have the start of something potentially terrifying.

AP2HYC: I think it’s safe to put Post Mortem in the horror/thriller/gore genre, so I’m wondering if any specific films/literature/television/etc. within the same niche had any influence on the trajectory of the comic or the overarching themes.

PW: Strangely it was more real life articles and documentaries I watched that influenced the book itself.  Reading about body harvesting across the globe and the market value of a person gave me a glimpse that movies and literature hadn’t really touched on.

There was so much more than waking up in a bathtub full of ice and the fact that almost 90% of your body has a market value.  There was a mystery surrounding how people vanished and it gave me chills to think about what sort of people would do this.

Film wise I love mystery horrors the likes of The Cube, Saw, Hostel as well as a lot of Japanese horror that are my usual go to inspirations for a gory story. You know….the light-hearted stuff

AP2HYC: Obviously this is a comic that is disconcerting to read and look at, so I’m curious as to whether or not there was ever a moment/sequence/panel/etc. that you thought might be going too far? Did you ever pause and think, “Maybe tone it down a bit,” or were there really no boundaries in your mind as far as where you could take these characters and what obstacles you could put them through?

PW: There have been a few times that I have had to really take a step back and review the content.  Pause, reflect and continue and there are certain things I do draw the line at.  My imagination has no boundaries when creating the idea and developing the story but I do have limits with regards to subject matter.

There are many subjects that for me are just controversial to the point that you can divide fan bases and even lose fans.  Crossing the line is not a matter of holding myself back but more understanding why it’s wrong and to the point that I myself do not agree with it.

As a story there are no boundaries but for the subject matter involved there is a clear limit to what is acceptable and what is just pointless and sickening.

I feel the content and story is so expansive that there is no need to tarnish it with reaction based controversy. There is a huge difference between a story that has blood and gore and a piece of media with blood and gore, it has to have a story.

AP2HYC: While clearly a horror-esque comic, it seems that Post Mortem is also dealing with a fair bit of mystery. How important was it to balance all of the smaller genres of the comic in order to create a plot that you felt would be intriguing enough to keep readers wanting to come back for more?

PW: I love twists and turns in stories that keep you on your toes.  The mystery within Post Mortem becomes something that, when revealed, really adds depth to the main subject.  The flow of both story and panel progression is key to keeping people’s interest and keeping them as fans.

The longevity of a story is based on this and it should be at the forefront of every creator’s mind when writing.  I don’t want people to say, “I could have written that ,“ I want them to say, “Damn didn’t see that coming.”

Post Mortem as a story does have a huge mystery that is slowly uncovered as the series continues and being a fan of horror and comics myself I would definitely love it. Based off the reaction from the preview book there are many that feel the same.

AP2HYC: The subject matter of Post Mortem is so deeply unsettling and morbid that I assume it was deemed incredibly important to find artists who could really make the visuals feel truly visceral for readers. What was the process like of bringing Jaime Martinez and Santiago Ramos into the fold?

PW: I previously had a few other artists have a go at some concepts and sequential pieces of the book to see what we could achieve artistically.  I found myself very protective over the essence of the story and what the style should portray. I just didnt get the feeling I desired from the artwork that came in. It was great artwork by some fantastic creatives but I needed something that would appeal to me and garner a reaction that as a horror and comic fan stood out…

Enter Jaime Martinez and Santiago Ramos, whom I met through Facebook a few years back, having a go at the art, and when the first pieces arrived in all their colourful  detail I only had one word: Wow.

Working with them was a dream from a writer’s perspective and the process was a pleasure. The language barrier was non-existent and they knew exactly what we were after in every panel. No egos, just polite hard-working artists that love what they do.

AP2HYC: What has your Kickstarter campaign been like so far? I’m sure initially the entire process must have been extremely nerve-wracking so it must be a relief to have already exceeded your goal! Does having all of this support from strangers reaffirm to you that Post Mortem is a unique and exciting new comic that deserves to be seen in its printed glory?

PW: This was our second attempt at the Kickstarter for Post Mortem and we looked at the first incarnation as an experience to learn from.  We dusted ourselves off and reviewed every part of the campaign to find out what was needed.

The journey has been an absolute blast and the reaction from strangers has been quality.  Having someone you have never met become a fan of something you enjoy doing really does reaffirm that I must be doing something right.

I have had some amazing emails and messages from people sharing the campaign and just being really good people.  I didnt get the reaction of the season finale of the Walking Dead but a genuine interest in what happens next was a clear indicator that phase one of a story’s life was achieved and it had intrigued people.

AP2HYC: On the Kickstarter page, you mention that Post Mortem is a project that’s really been four years in the making. What was it that finally brought it to the point where it felt ready to be launched on Kickstarter and shared with the world?

PW: Crowdfunding is a solid foundation for imagination, funded by the community and driven by people who want to provide and offer support. The community is an integral part of why we decided on launching a Kickstarter.  We spent four years developing and networking in order to achieve the goal of realizing our dreams.

Networking and talking to like-minded peers is a really good way of learning and developing not only your own abilities but also your relationships with fellow creatives and fans alike.  Building a fan base or following is vital for any project not only for crowdsourcing but for longevity of your story.

The four years became a road map of obstacles and setbacks that really in itself could be a guide to people starting out. The people I met along the way have become more than just friends and many have supported me through some real hard times and vice versa.

Support is key to a healthy balance of life and love.

AP2HYC: Lastly, you’ve said that Post Mortem is a five-issue series but… should it be as successful as its Kickstarter has been thus far… is this a world that you think could feasibly extend beyond five books, or would you say the final issue ties everything up in a clear THE END kind of way?

PW: During the development of the story we created various characters with some chilling backstories of their own of which we will be touching on in our mini comic companions to Post Mortem.  The likes of my favourite character the Dog Handler whom could have his very own stalk and slash series.

With the current arc we don’t want to give too much away but there is an ability to expand the world of post mortem to continue the series further or even branch off with other stories.  Its definitely a story i would love to continue. In the world of comics anything is possible and even though the current story ties up over 5 issues, the setting and world itself is expansive and has a hell of a lot to offer the avid horror reader.

Be sure to check out Post Mortem over on Kickstarter for some more info on the new series and let us know on Twitter or in the comments below what you think!