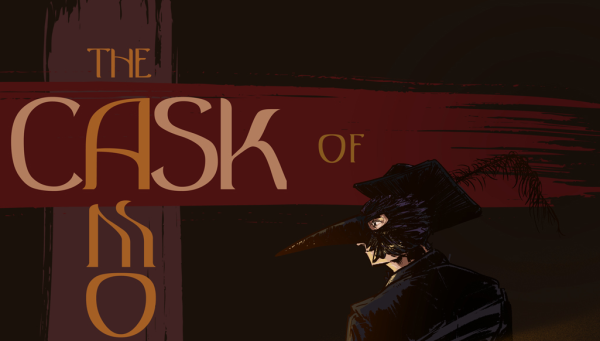 The comic adaptation of Edgar Allan Poe’s “Cask of Amontillado” is a brave attempt by adapter Enrica Jang, artist Jason Strutz and Action Lab Comics. I can think of few greater challenges for an artist than adapting a masterwork of Edgar Allan Poe for popular consumption. In 1961, Director Roger Corman and actor Vincent Price created a fantastic –I’ll be it, loose– film adaptation of Pit and the Pendulum. In 1976, the record producer Alan Parsons managed to perfectly create an Edgar Allan Poe inspired rock album titled “Tales of Mystery and Imagination.” In 1990, The Simpsons did it during the classic second season episode “Treehouse of Horror.” It has been over 150 years since the death of Edgar Allan Poe and the writer casts a long and brutally dark shadow over any artist brave enough to touch his work.

Though this comic hasn’t managed to cast a light in Poe’s shadow, it is a passable companion art-book to be enjoyed only after reading the source material. Strutz successfully captures the festivities of carnival and Italy. The illustrations of vaulted ceilings, brick arches and buttresses make a point of showing artist took time to craft the crypt where Montresor lures the foolish Fortunato. Clever paneling toward the middle of the comic makes this an artbook worthy of display. I have heard it said that, ‘a picture is worth a thousand words,’ but that may not be true when the words are written in gold by an immortal author. An adaptation of a master artist cannot hold up if the adaptation is missing the key ingredient that made the original great, no matter the quality of Strutz’s art.

Sadly, Enrica Jang hacked away everything that made Edgar Allan Poe’s revenge plot worth reading. Captions containing the original narrative were disappointingly absent. Gone from this comic is the motive, the beauty of the words and the deep subtlety of character such as the narrator Montresor’s glass ego. The first sentence of the original story shows all these things and more, “The thousand injuries of Fortunato I had borne as I best could, but when he ventured upon insult I vowed revenge.” In the short story, Montresor is easily offended over non-issues and wants to commit a vengeful murder without being caught. In this comic, Montresor does the deed so he can kiss Fortunato’s wife. While I know Montersor would disagree, I don’t think these thousand insults are cause enough for Jang’s comic to be bricked up in a wall. She cuts it close in the final pages and lays the last brick of a bad story by adding an unnecessary homage.

Arguably the limited page length is the villain responsible for the adaptors cuts, inexcusable as it may be. The original story is only 5 pages long. This comic does not manage to capture any of the meaning from the original Cask of Amontillado. Just as I would warn Fortunato not enter the crypts in pursuit of wine, I must warn any potential reader from picking up this adaptation before reading Poe’s classic. This comic is at best an artistic caricature of a literary classic and at worst a black mark on a talented and accomplished writer’s resume.

Have you read this comic? Do you agree with this Review? What is your favorite comic adaptation of a literary classic? Let us know in the comments or on Twitter!